Home » Schoharie County Board of Supervisors 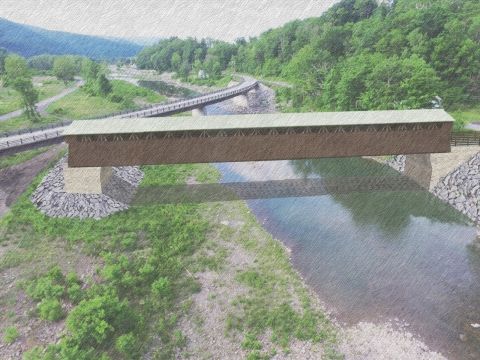 Above: A rendering of the reconstruction of the Blenheim Covered Bridge.

Blenheim residents are one step closer to getting their beloved covered bridge back after the Schoharie County Board of Supervisors voted unanimously to submit final design plans for the bridge to the Federal Emergency Management Agency on Friday, June 17.

Swept away by the raging waters of Hurricane Irene on Aug. 28, 2011, the loss of the Blenheim Covered Bridge, which had the longest span of any surviving single-span covered bridge in the world, became a symbol for all that the Schoharie Valley had lost as a result of the flood.

The design plans were presented on Friday by Ed Snyder of Greenman-Pedersen, Inc., which is handling such projects as the construction of the new Tappan Zee Bridge. The designs for the new covered bridge are based on a mix of the original designs and necessary improvements.

Although the appearance of the structure itself will remain true to the original, Snyder detailed a number of changes, including the replacement of the bridge’s stone abutments with abutments made of reinforced concrete.

Furthermore, the elevation of the bridge will be raised by 10 feet to put it above the 500-year flood plain. Additionally, there will be retaining walls on either side of the bridge, as well as a concrete walkway that will grant accessibility to everyone who wants to use it.

With the county board's final stamp of approval in place for the project, Snyder said that the reconstructed bridge could be rebuilt within the next two years.

Expecting FEMA approval of the designs in July, Snyder said that the county could open up construction bids for the project this fall, which would allow construction to begin next spring and to be completed by summer 2018.

The final cost of the project clocked in at $10.22 million, Snyder said. however the county's share of the bill is zero. Costs will be split between the federal and state governments, with the federal government covering 75 percent of the cost and the state covering 25 percent.

This has been a long-anticipated moment for residents of the Schoharie County town of Blenheim. Federal and state officials initially balked at rebuilding the bridge, and at one point FEMA would only agree to replace the bridge with a gazebo.

However, community advocates and politicians waged a lengthy campaign to rebuild the bridge. Last week, they rejoiced.

Don Airey, the head of the Blenheim Long-Term Community Recovery Committee (BLTCR), recalled the small community's battle with FEMA to get this far, and said the new bridge would represent the final phase of the county moving past Irene.

”This is a good step for the town," said Blenheim Supervisor Shawn Smith, who made the motion to approve the final design plans at Friday's meeting.

Smith added that he hopes that the bridge can be connected to the creekside trail project that Schoharie Area Long Term Disaster Recovery (SALT) has been looking into developing.

Praising the efforts of the BLTCR and Smith before the presentation and vote, Schoharie County Flood Recovery Coordinator Bill Cherry said they all "deserve a great deal of credit for standing up for their community."