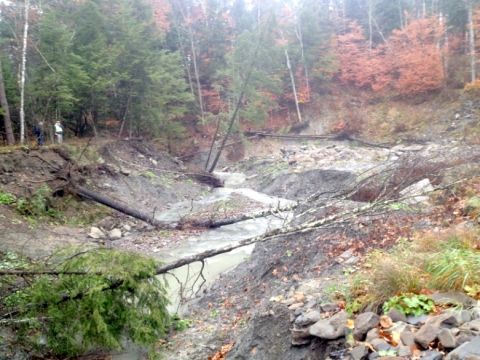 Above: Flood damage in a Schoharie County stream. Photo via SchoharieStreams.com.

In the latest blow to Schoharie County's floundering $29.5 million streambank remediation project, the New York State Department of Environmental Conservation (DEC) has notified county leaders that it intends to suspend all DEC permits for the project.

In a Jan. 20 letter addressed to Schoharie County Board of Supervisors Chairman Earl VanWormer, County Administrator Steve Wilson and Commissioner of the Department of Public Works Dan Crandall, DEC Deputy Chief Permit Administrator Michael Higgins cited the agency’s power to suspend permits if the project has failed to operate under the agreed-upon terms and conditions.

Plagued from the start in 2012 with controversy, the project was expected to cost $23 million, with the federal government covering 75 percent of the costs and New York State covering the rest.

Soon the project’s costs ballooned millions over budget, with one contractor, AECOM, getting improper approval to conduct millions of dollars of extra, unfunded work.

Last summer, the Natural Resources Conservation Service (NRCS) halted payments for the massive project, and an audit found that the Schoharie County Board of Supervisors mismanaged the effort.

In December, Schoharie County supervisors voted to borrow another $15 million through bonding in an attempt to cover the project’s additional costs. However, the measure contains an amendment that forbids the release of any funding of the $15 million until the NRCS releases funding for the project.

In its Jan. 20 letter, the DEC outlined the following reasons for suspending the permits for the streambank project:

According to the letter, which you can read in full at the bottom of this story, Schoharie County has 15 days to dispute the DEC's reasoning or to request a hearing, after which the agency will determine whether to rescind or confirm the permit suspensions.

Feb. 1 is also the deadline for the county to submit a corrective action plan for the streambank project to the DEC, the NRCS and the US Army Corps of Engineers.

Multiple attempts to reach NRCS officials through emails and calls went unanswered as of press time.

On Thursday, Jan 21, Schoharie County officials appeared unconcerned by the DEC’s threat to suspend permits for the streambank project.

County Board Chairman Earl VanWormer described the DEC's letter as "a warning notice to suspend" if there is not an agreement between the county and NRCS by Feb. 1.

"I think everyone has been working pretty diligently to come to an agreement,” said County Board Chairman Earl VanWormer, one of the recipients of the DEC’s letter. "Hopefully, that will happen by February 1.”

“Work has been stopped in the streams for quite a while, so the DEC suspension is not really a game changer,” said Blenheim Supervisor Shawn Smith, who has opposed the streambank project in the past but is now overseeing it as the chairman of the county’s flood committee.

Smith said that the county is currently getting engineering work done for the project remediation plans that are due on Feb. 1 to get the funding suspension for the project lifted by the NRCS.

"Once we do that I think we can move forward, so that's my primary goal,” Smith said.

The streambank project has been on hold since September 2015, leaving local contractors sitting on the sidelines waiting for payment.

“We are owed over $2 million dollars,” said Burr Hubbell of Hubbell Companies, one of the contractors working on the project.

“The project is a government boondoggle which has held our company hostage for over two years now," Hubbel said. "Our bonding is tied up and not available to bond other projects.”

Other contractors are owed additional funds. In December, C&C Rock LLC calculated that it was owed $844,682 from by Hubbell Companies for supplies.