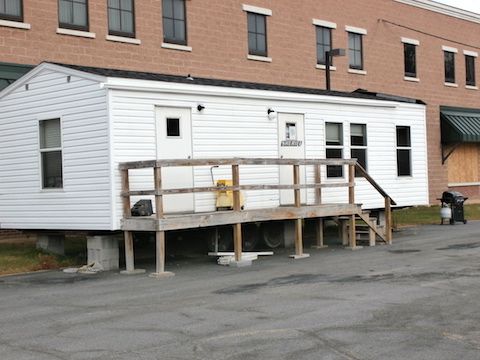 Above: The FEMA trailer that has housed the Schoharie County Corrections Office since Tropical Storm Irene flooded the Catskills in August 2011. FEMA trailers are intended to serve as temporary housing for up to 18 months. Photo by Timothy Knight.

It’s been over four years since Hurricane Irene inundated communities across Schoharie County, and many of the flood-damaged businesses and homes have been rebuilt.

But the Schoharie County Corrections Office is still housed in a dilapidated FEMA trailer with a portable outhouse for a bathroom.

During the August 2011 hurricane, the county's Public Safety Facility, located in the village of Schoharie, was ravaged by raging floodwaters. The county jail in the first floor of the complex was completely destroyed.

Most of the staff of the Schoharie County Sheriff's Office was moved to the relatively undamaged second floor, but the corrections department were put in a Federal Emergency Management Agency (FEMA) trailer in the parking lot.

Given to Schoharie County free of charge, the cramped trailer was originally intended as a temporary fix. Instead, it has become a lasting reminder of the long shadow of the flood.

Four years in a FEMA trailer

The Schoharie County corrections trailer is approaching its 48th consecutive month of use, far outliving its advised lifespan. FEMA typically assigns families to its manufactured homes for no more than 18 months.

The trailer is showing its age. It has blackened air filters, uneven flooring, a leaking roof and several fire hazards, including a door that opens the wrong way and an electrical panel that is hanging by its hinges. The tiles on the floor are broken. A hole in the door lets in the cold.

Above: A portable outhouse has served as a bathroom for the Schoharie County Corrections Office since Tropical Storm Irene in 2011. Photo by Timothy Knight.

There is no running sewage or water in the structure, so deputies and prisoners alike are forced to use a portable outhouse that offers little to no meaningful protection from the elements. They get their water from an outdoor spigot.

“The FEMA trailer’s got a refrigerator and a stove, but they can’t run it because it blows the fuses out,” said Schoharie County Sheriff Tony Desmond. “Out of our own pockets the undersheriff and I bought them a microwave.”

Above: The interior of the Schoharie County Corrections trailer. Photo by Timothy Knight.

Sixteen officers are assigned to the corrections trailer. They work in shifts, three or four at a time, transporting inmates to and from a jail in Albany County for local court appearances. They say that the role of corrections officers has been severely reduced while its officers await the construction of a new jail.

The trailer serves as a "place to house deputies during their shift," said 23-year-old Deputy John Hulber.

It doubles as a makeshift guardhouse for the entire county. Due to budget cuts, there are no sheriff’s deputies on road patrol between 1 a.m. and 5 a.m. in Schoharie County, according to Desmond. The corrections officers are the only deputies who are on duty 24 hours a day.

Above: A hole in the door of the Schoharie County corrections trailer lets in the cold. Photo by Timothy Knight.

“They should have our backs”

The county never intended to keep the Corrections Office in a trailer for so long. The entire Sheriff's Office, including its corrections officers, will eventually be housed in a replacment Public Safety Facility, slated to be built on the former Seebold Farm on Route 30 for $37 million. But that project has run into legal trouble; this fall, a group of neighbors filed a lawsuit to block the project.

Thanks to the lawsuit and the vagaries of construction, it will be another three years at least until the new Public Safety Facility is built, according to Schoharie County Sheriff Tony Desmond. In the meantime, much of the county's police force is stuck in their decaying trailer.

Schoharie County Sheriff Tony Desmond requested $11,000 in funding for a new corrections trailer in the tentative 2016 county budget. But last month, over Desmond’s strenuous objections, Schoharie County’s Board of Supervisors cut that funding in an attempt to limit an expected tax increase.

In the revised budget, the Sheriff’s Office was left with just enough money to repair the existing trailer's roof.

"The [corrections officers] deserve a lot of credit for operating under the circumstances that they have,” said Desmond.

But those officers are anything but content with their work environment, and in the wake of the latest cuts, they are speaking out.

Deputy Floyd Seales, who has served in the Schoharie County Sheriff’s Office for 17 years, called the wait for a new facility "very frustrating.”

“No other department in this county is putting up with the conditions that we are," Seales said. "They [the Board of Supervisors] get away with it, because so far they have."

On his way to transport a prisoner back to Albany County recently, Seales pointed out that the patrol car he was driving was rusty. The Sheriff’s Office has requested two new squad vehicles, but the Board of Supervisors approved only one in the recently-passed 2016 budget.

“We've always been the red-headed-stepchild of the county,” said Deputy Jennifer Brown, a 10-year veteran of the department. She hoped that county officials would "live in my shoes for one day," she said.

Noting that law enforcement had the county's backs during the flood, she said, “now they should have ours.”

Prattsville bridge over Schoharie Creek to be replaced

The Old Blenheim Bridge will lose its historic status

On the brink of a buyout, junkyard burns in Fleischmanns
Shandaken employee charged with embezzling flood funds