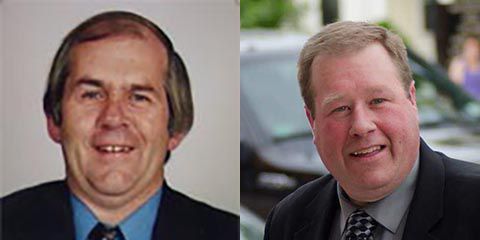 Above: Earl Van Wormer, left, and Chris Tague, right, faced off in a close race for chair of the Schoharie County Board of Supervisors on Monday, Jan. 4. Van Wormer won the position.

Longtime Esperance Supervisor Earl Van Wormer was elected to his ninth nonconsecutive term as the chairman of the Schoharie County Board of Supervisors on Monday, Jan. 4, staving off a challenge from fellow Republican and newcomer to the board, Schoharie Supervisor Chris Tague, for the position.

Tague, a Republican, defeated Democrat Supervisor Gene Milone for the position of supervisor of the town of Schoharie in November.

A third candidate for the chair position, Fulton Supervisor Phil Skowfoe, was supported by four Democrats for a total of 508 weighted votes.

The race for chair was so close that a new vote was taken.

With the Republican caucus split firmly between Van Wormer and Tague, the four Democratic lawmakers were able to play kingmaker on the second ballot.

Tague may be new to the Schoharie County Board of Supervisors, but he is a big political operator in the county. He is the vice-chair of the county GOP and is an executive at Cobleskill Stone Products. This fall, his successful campaign for town supervisor of Schoharie raised almost $20,000, a large amount for a rural town supervisor race.

Tague did not respond to numerous requests for comment regarding Monday’s race.

The Daily Star reported on Monday that Van Wormer has some dirty laundry: an unpaid $34,444 federal tax lien that was filed against him and his wife in January 2014. Van Wormer told the newspaper that the lien is a dispute with the IRS over his income and that he expects to “work it out.”

First voted into office in 1993, Van Wormer had previously served as chairman of the county board from 2003 to 2013, until he was ousted in 2011 by a caucus of conservative-minded Democrats and Republicans in favor of Summit Supervisor Harold Vroman.

However, after electing four different chairmen over the past four years—Vroman in 2012, Skowfoe in 2013, Gilboa Supervisor Tony VanGlad in 2014 and Richmondville Supervisor Richard Lape in 2015—Van Wormer was given the gavel again in September 2015 after Lape unexpectedly resigned as chair.

Van Wormer took a few moments after his victory to make a brief speech, thanking everybody who supported him. "I hope I live up to everyone's expectations," he said, adding that his only promise is to "do the best I can."

Tony VanGlad, who had previously served as chair, was elected vice-chairman with the support of 11 Republicans, while Skowfoe was supported by his Democratic caucus and Tague received one vote from new Middleburgh Supervisor Pete Coppolo.