Supervisors: Delaware County bed tax is back, budget is up 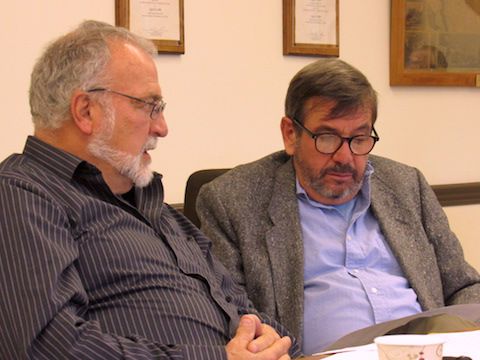 Above: Colchester Supervisor Art Merrill, left, and Davenport Supervisor Dennis Valente, both opponents of the proposed Delaware County bed tax, conferred during Wednesday's meeting of the board of Supervisors. Photo by Robert Cairns.

A new version of a proposed Delaware County tax on hotel and motel occupancy was introduced at the Wednesday, Nov. 10 meeting of the Delaware County Board of Supervisors.

An earlier version of the local law to authorize the two percent tax on overnight stays at lodging establishments was withdrawn last month after supervisors agreed with critics that it unfairly placed the tax on establishments that are already subject to sales tax while allowing casual rentals of rooms and homes to go tax-free.

The new version of the law makes such casual rentals subject to the bed tax by removing language that specified that only establishments that provide maid service or other amenities are taxable.

The change is designed to make the law applicable to rooms booked through services such as AirBnB or advertised on classified ad sites like Craigslist.

A public hearing on the tax will be held on Tuesday, Nov. 24 at 12:30 p.m. in the supervisors' room in the county office building at 111 Main Street in Delhi. A hearing on the earlier version was lightly attended, with only three people offering comment.

The vote to set the public hearing on the bed tax was not unanimous. Colchester Supervisor Art Merrill and Davenport Supervisor Dennis Valente voted “no.”

“We've got to kill it in the crib, somehow,” said Valente, who is an opponent of the bed tax.

The increase exceeds the state's cap on property tax increases, which, Dolph said, is .73 percent.

“We're definitely over it,” he said, referring to the tax cap.

A public hearing on the budget was scheduled for Nov. 24 at 12:45 p.m. The budget will likely be approved at the board's meeting that day.