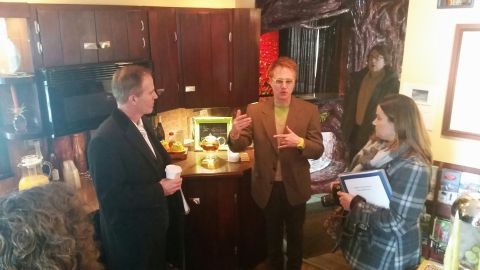 In his draft budget for the 2015 - 2016 fiscal year, Gov. Andrew Cuomo is proposing an ambitious goal: high-speed internet for everyone, including in rural areas like the Catskills, by 2019. Greene County, in the Catskills, has the worst broadband access in the entire state, according to statistics released by the governor’s office.

To underscore the importance of bringing broadband to remote rural areas, David Salway, the director of the New York State Broadband Program office, made the trek to the Delaware County town of Roxbury to give a small press conference at the Roxbury Motel on Wednesday, Feb. 25.

“We’re talking about very high speed internet access by 2019,“ Salway said. “We want to connect every business premise and every residence. It’s not just about people in their homes running Netflix videos; it’s about the business, the economic opportunities as well. Health care, telemedicine, school access.”

For the Roxbury Motel, faster internet can’t come too soon. The hotel often gets complaints about the internet from guests who expect to be able to download movies, conduct video calls and email large files, owner Greg Henderson said.

Above: David Salway speaks at the Roxbury Motel. Photo by Julia Reischel.

“We can’t market ourselves as a cutting-edge hotel when the bandwidth often gets maxed out,” Henderson said. “People have no patience for internet outages. And it’s always our fault. Having enough bandwidth to accommodate all of our guests at once would be an absolute godsend.”

The Roxbury offers free internet partially to offset the lack of cell phone service in Roxbury, but the lack of both cell and high speed internet can turn guests off instantly.

In 2014, Henderson said, executives from Apple planned a think tank at the Roxbury and also booked caterers, entertainment and meeting facilities in the town.

“I did warn the person coordinating [the event] that cell phone was going to be spotty,” Henderson said. “They all arrived, and within an hour, her head was served on a silver platter somewhere and they all left. ‘Well, the internet’s just decent,’ I overheard them saying.’”

“The goal in our state quadruples the minimum speed that the Federal Communications Commission has set today,” Salway said.

“Universal—that means for every nook and cranny in New York state, including and especially Roxbury. That’s what your guests expect, and that’s what they should expect.”

The governor’s proposal will become final if his draft budget is adopted in June. It pledges $500 million in state funds, taken from billions of dollars in bank settlements, to building broadband infrastructure, which the governor expects to be matched by another $500 million in private investment.

The goal is to give every New York state resident and business download speeds of at least 100 megabits per second (abbreviated Mbps). At those speeds, you can download an entire movie in less than a minute. In January, the FCC voted to establish 25 Mbps as the minimum broadband speed for internet providers in the U.S.

In fact, Greene County has the worst broadband access of any county in New York state, according to a list of broadband speeds released by the governor in January. A third of Schoharie and Delaware County residents and a whopping 79 percent of Greene County residents do not even have speeds of 6 Mbps, which means that downloading a movie takes hours. (At 100 Mbps, it takes seconds.)

Above: Broadband download speeds of at least 100 Mbps in New York. Via the governor's office.

The governor’s new broadband program builds on earlier state and federal broadband initiatives, including New York State’s Connect NY, which pledged $25 million in grants to broadband expansion in underserved areas, and the federal government’s 2009 stimulus bill, the American Recovery and Reinvestment Act, which put $7.2 billion towards improving broadband infrastructure throughout the U.S.

Several Catskills internet service providers, including the Margaretville Telephone Company, the Deposit Telephone Company and Time Warner Cable, have received funds to beef up broadband service through these various programs. A collaboration between MTC, the Delhi Telephone Company and the Delaware County Electric Cooperative received an additional $2.9 million in grant funding in December 2014 to bring broadband to more underserved residents in Delaware County. Thanks to these efforts, thousands of rural households in the Catskills now have broadband.

Who owns the poles?

According to Salway, a major goal of the state’s new broadband proposal is to encourage collaboration between the patchwork of small internet service providers that supply internet to many remote areas.

“It’s some of our smaller ISPs [internet service providers] that aren’t serving the entire state, those are the ISPs that stepped up over the years to invest in rural broadband,” Salway said. “If the economics won’t do it further, we want to help those providers establish service.”

One of the biggest obstacles to better internet access in rural areas is the mundane but crucial issue of who owns which telephone poles, Salway said.

“There’s different pole ownership, and the issue of pole access can be time intensive and cost intensive,” Salway said.

Often a tangle of regulation and fees stands in the way of providers who want to use infrastructure belonging to someone else. By giving money to ISPs that collaborate with each other, the new broadband program aims to smooth the way for partnerships.

But it’s all academic until June, when the New York legislature is slated to approve the governor’s budget. After that, Salway’s office will lead a process of choosing broadband projects with the input of the state’s Regional Economic Development Councils. “We’ll bring everybody together and start the process,” Salway said.

Full disclosure: Lissa Harris, the publisher of the Watershed Post, is a shareholder in the Margaretville Telephone Company. The business was founded in 1916 by Harris's great-great-grandfather, John Birdsall, and remains in the family. Harris is not employed by the company or involved in its management.