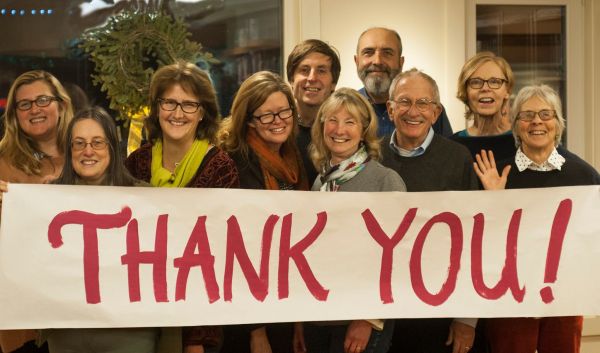 The Phoenicia Library Board celebrates the outcome of a very tight race at the polls at their board meeting on Thursday, Dec. 15. Photo from the library's Facebook page.

Here in small-town America, never let it be said your vote doesn't count.

This year, the fate of a substantial budget hike for the Phoenicia Library lay in the hands of voters in the town of Shandaken, with a proposal on the ballot to increase the library's annual funding from $94,000 to $162,000. In the unofficial vote tally on the night of Nov. 8, the budget measure failed narrowly, 634-613. But with dozens of absentee ballots still outstanding, the vote was too close to call.

A recount including all absentee and affidavit ballots was completed on Thursday. According to Ulster County Democratic election commissioner Vic Work, the count now stands at 698-713, with the library budget proposal ahead by just 15 votes.

The recount of the Shandaken ballots was held up in recent weeks by a challenge to 26 ballots in an unrelated countywide surrogate court race, Work said. "The surrogate court attorneys were challenging ballots, but they had the town proposition on them, and until they withdrew their challenges, we couldn't count those ballots," he said.

The current results are still unofficial, Work said, but will be certified sometime before Christmas.

For their part, library staff and board members are thrilled with the news, and will be celebrating at their scheduled open house on Saturday, Dec. 17.

This weekend: Grand opening party for the rebuilt Phoenicia Library

Funding the Phoenicia Library: A Case for Voting "Yes" on Prop 414

"The little beating heart of the town": Uncle Rock throws a benefit for the Phoenicia Library