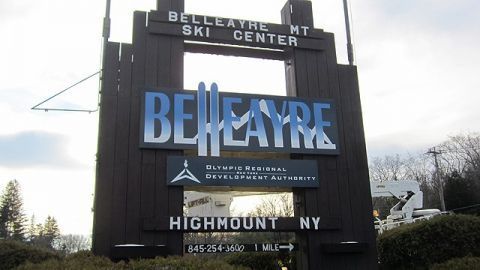 It's a little late for a Valentine, but it looks like Belleayre Ski Center will be getting some love from New York State after all this year.

In a press release Thursday, Gov. Andrew Cuomo announced $8 million in funding for upgrades at the ski center in his executive budget for the upcoming year. Plans for the funding include a new year-round high-speed gondola to the summit and improvements to the Discovery and Overlook ski lodges. In the release, Cuomo also touted the state's efforts to boost tourism in the Catskills region at large.

The Belleayre news arrived in the middle of a local dustup over another announcement, made late last month, that Gore and Whiteface ski centers in the Adirondacks would be getting $20 million in the executive budget -- a move that was widely interpreted by the local community as a snub to Belleayre. All three ski centers are run by the Olympic Regional Development Authority, a quasi-public authority funded by the state.

ORDA spokesman Jon Lundin said that the governor's budget announcement had been in the works for some time.

"ORDA, Belleayre and the Governor’s office have been working hand in hand for the past year to make this happen. It’s exciting for all who ski and ride Belleayre," he wrote in an email.

Cuomo had no intention of leaving Belleayre out of ORDA funding, Lundin said.

The Watershed Post reached out to the Governor's press office several weeks ago to ask whether Belleayre funding would be announced separately, but we did not receive a response.

The Belleayre news also follows closely on the heels of a Wednesday decision by the Shandaken Zoning Board of Appeals that favors the developers of the long-planned Belleayre Resort project, slated to be built next to the ski center. Crossroads Ventures' plan for the site relies heavily on state-funded upgrades to the ski center, which were agreed to in 2015 but have yet to be put in motion.

We're collecting reactions from local organizations and businesses, and will add them below -- so if you want to weigh in on this news, please email us at editor@watershedpost.com.

Below is the full text of the release.

Governor Cuomo Announces $8 Million for Upgrades at Belleayre Ski Resort
Funding will Support the Construction of a New Gondola and Upgrades to the Base Lodge at Belleayre Mountain
Expansion Will Allow for More Trails, and Year-Round Recreational Opportunities

Governor Andrew M. Cuomo today announced the state will invest an additional $8 million for upgrades at Belleayre Ski Center in Highmount to attract more visitors and build on the Catskill Region’s burgeoning tourism industry. The investment will enhance the current facilities at Belleayre Mountain with the installation of a new, high-speed gondola, multiple lodge expansions and the addition of modern amenities for both lodges at the resort. The project will increase visitation, enhance customer experience and provide a major boost to tourism in the Catskills and the region's economy.

“Belleayre Mountain is one of the crown jewels of the Catskills and a major driver of the region’s tourism economy,” Governor Cuomo said. “With this investment, we are supporting vital upgrades at this mountain to ensure it remains an unparalleled year-round recreation destination and continues to leverage economic growth for the entire region for generations to come.”

“This plan will overhaul the Belleayre Ski Resort to address areas of need, increase visitation and overall enhance customer satisfaction,” said ORDA President & CEO Ted Blazer. “The additions of the new gondola, and modern day lodge amenities at Belleayre will attract new skiers and riders and encourage them to stay in the New York area for their resort experience. I would like to thank the Governor for his continued commitment to not only Belleayre, but to the Catskill Region.”

The FY 2018 Executive Budget includes $12.5 million for Olympic Regional Development Authority facilities, which includes Belleayre, Whiteface and Gore Mountains, as well as Olympic facilities. Last month, the Governor announced an additional $20 million to upgrade the facilities at Whiteface and Gore Mountains in the North Country and build on the region’s burgeoning tourism industry. These new capital investments are being added to the Executive Budget as part of the 30-day amendments, submitted today.

Upgrades at Belleayre Mountain include the construction of a high-speed, eight-person gondola that will span from the lower mountain Discovery Lodge to the mountain summit, providing more efficient, logical, and necessary access point to skiers and riders. The installation of this lift, along with other proposed changes, would overhaul the entire facility and elevate Belleayre to a higher level of resort experience. The new gondola will include 65 cabins that will transport guests to the summit in under six minutes, massively increasing the skier capacity of the mountain and providing for a better ski experience. The Gondola would also provide additional revenue opportunities as the use of indoor cabins allows for the following offerings:

Nordic and Cross Country skiing at the expansive summit of the mountain;
Year-round scenic gondola rides as sold at Whiteface & Gore Mountains;
Mountain biking from the mountain summit; and
Wedding and private party rentals at mountain summit.

The mountain has two primary lodges, the Discovery Lodge at the lower base area lodge that services beginner terrain and rental facilities, and the Overlook Lodge, which accesses the upper mountain offerings and handles the majority of food and beverage offerings. With the addition of a Gondola, expanding lodge offerings is critical to sustaining the additional guest base expected as a result. The state will provide $1.5 million for upgrades at each of the lodges.

Discovery Lodge Improvements: The Discovery Lodge at Belleayre contains a children’s learning area, ski school areas, cafeteria, bathrooms, and a small bar/café. Improvements to the Discovery Lodge will increase its current seating capacity, retail space, increased food/beverage locations, and addition of office space. This would provide enough space to have a fully functioning learning area for all ages with the necessary amenities to service these guests as needed including bar and restaurant style offerings.

Overlook Lodge Improvements: The Overlook Lodge currently provides guest access and gathering at the lift points reaching upper mountain, and contains a cafeteria area as well as a bar and restaurant with an attached deck. Improvements in this area will expand increase seating capacity, storage and locker areas, daycare facilities, and expansion of food and beverage offerings. Improvements at Belleayre Mountain will support the facility’s role as a major driver of the Catskill Region’s tourism industry and will ultimately expand economic growth and investment opportunities for the surrounding communities. It will also make unparalleled skiing and winter recreation opportunities more accessible to visitors from New York City and downstate regions closer than other skiing locations throughout the northeast.

Tourism in the Catskill Region

The investment at Belleayre Mountain builds on the Governor’s accomplishments that are already setting the stage for future growth in the Catskills region, including:

Over $5.4 million invested in the Catskills region by DEC to improve fishing access, hiking trails, campgrounds and infrastructure;
The Maurice D. Hinchey Catskill Interpretive Center, a $1.3 million project supported by New York Works, which was completed in 2015 and provides information to visitors about the 700,000–acre Catskill Park; and
Improvements to enhance the experience of visitors and increase public safety, including an observation platform, completed at Kaaterskill Falls.