Funding the Phoenicia Library: A Case for Voting "Yes" on Prop 414 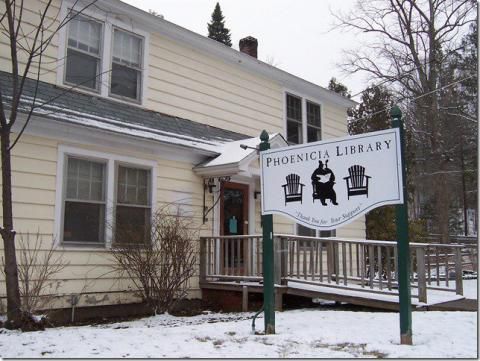 The Phoenicia Library's temporary location at the Maverick West building on Ava Maria Drive. Photo from the Phoenicia, NY website.

On Election Day this year, voters in Shandaken will be deciding on Proposition 414. It's a measure to increase town funding for the Phoenicia Public Library by $11,000 -- a sum equal to each homeowner kicking in an additional $3 annually toward the Library’s operating budget.

Public libraries are almost universally appreciated in concept. In reality, though, that appreciation doesn’t always translate into a willingness to spend what is needed for a library to provide the level of service that a community wants and/or has grown accustomed to. That becomes especially true when times are hard, and most would agree that times are hard right now.

I interviewed Bernie Handzel, who chairs the Proposition 414 referendum committee, about the library’s request for increased funding, and asked Liz Potter, library clerk, to talk about services that the Phoenicia Library now provides and ones that they hope to initiate.  We discussed why there was a need for more funding from the town now, and whether alternate means to meet those needs could be pursued instead. I wondered what, if anything, this fiscal request has to do with the fire that gutted the regular library building during the Summer, and about the subsequent fundraising that has been ongoing ever since to restore the Phoenicia Library, or even improve on its former state.  Finally, I asked them if the service a small town library can provide remains as important today as it was in prior years, before access to the internet became widely available. Hopefully their responses will help inform your vote.

Bernie began by emphasizing how frugal the Phoenicia Library has tried to be. The last time the Library Board asked for increased Town support was in 2006. Since then, he reports, there’s been an 88 percent decrease in county and state funding for the library in Phoenicia. Some operating expenses have gone up significantly since 2006 as well, fuel costs in particular. One budget line that hasn’t increased is staff wages, which will remain at 2006 levels, making the Phoenicia staff the lowest-paid in the mid-Hudson Valley, according to Handzel.

The bottom line: “We are now operating on an austerity budget that is in arrears,” said Handzel.  When I half-jokingly asked if the Phoenicia Library could face possible staff unrest over the compensation offered its workers, Bernie assured me that wasn’t an issue. While the librarians no doubt would welcome a well-earned raise, he said they understand that money is tight.

“We have an excellent staff which strongly supports the mission of the Phoenicia Library. They believe this library is a very important part of the community, and they want to prevent any services being cut back. They are fully on board with this budget.”

Handzel explained that as matters now stand, the Phoenicia Library routinely runs in the red. It often meets its current tense financial obligations by spending some money now that had been earmarked for future use, while scrambling to raise money to cover resulting future shortfalls before those bills come due.  It’s a shell game that the Library Board believes it can not depend on any longer. The $11,000 being requested would enable the Phoenicia Library to function with a viable operating budget. Without those new funds, cuts will be made, including reducing the number of hours that the library is open to the public, since that represents the bulk of library “discretionary spending.”

Bernie Handzel stressed the importance of viewing the Library’s request for additional funds for its annual operating budget, via Prop 414, as distinct from ongoing fundraising that is underway for Library restoration after the fire.

“I want to make it clear that this has absolutely nothing to do with the fire,” he said. “We would have had to do this even if there was no fire. We still would have needed to ask for an increase in our operating budget for next year.”

As it is, individual friends of the Library, and the private sector in general, along with various granting institutions, have been and will continue to be asked to support the recovery effort. Voters are being asked only to authorize the Town of Shandaken to up its contribution to the Librariy;s operating fund to help offset increases in library expenses that the Library has sustained since 2006.

The Phoenicia Library Board is trying to avoid confusing the two matters by dialoging with the public separately about each of them. With the election so close at hand, their attention now is focused on the annual operating budget. But on Thursday, November 17th at 7 PM, the library will hold a community meeting at Shandaken Town Hall to present their progress on efforts to rebuild. That meeting, and others to follow, is planned as an opportunity for the community to give input to the library board on restoration plans. Bernie stressed that planning for the project won’t be finalized without community members having a chance to voice their opinions and give their ideas to the Board.

Our discussion then turned to the real heart of the matter. How valuable are the services provided through the Phoenicia Library to the hamlet of Phoenicia and to the Town of Shandaken in general? Do they merit the increase in support being sought through Proposition 414 during hard fiscal times?  We began that conversation by discussing the role that a small community library can or should play in the age of the internet.  Has the internet in any way lessoned the importance of maintaining a physical library at the community level?  Handzel, you may not be surprised to know, thought not.

The Phoenicia Library, in fact, is an internet center for those without computers of their own.  It also provides broadband wifi. Handzel pointed out that easy and affordable broadband access is not available in all parts of Shandaken . Where it isn’t, most net users still must get by with dialup, which works well enough for email but not so well for more ambitious internet uses. The library regularly attracts patrons who drop in specifically for the broadband connection that it offers.

But on a more fundamental level, he made the point that though communication technology continues to change, the core role of the librarian has not. The librarian remains the warm and human interface between a library user and the information or material they are trying to find. Where once a librarian in Phoenicia might have instructed someone on the use of the card catalog, or familiarized them with a reference book on the shelf; now she might help a user learn how to narrow down a Google search term, or walk them through the steps involved in making an online purchase.

Far from falling out of use, use of the Phoenicia library has increased significantly in recent years.

”It has almost doubled since 2008,” Handzel reported. More users are turning to it as a portal through which the entire 56-member Mid-Hudson Library system inventory of books can be instantly searched for exactly the book a user wants, confirming whether or not it is immediately available, and placing reserves for a user on those books sought which are temporarily checked out.

The case for continuing to support a local library kept circling back to a few main points. For starters, the library continues to help those who otherwise could not afford to gain direct access to books and materials they either need or would enjoy. In hard economic times, the importance of that grows, Handzel noted.

“Five years ago someone might have simply gone into a Barnes and Noble book store and dropped $25, $30, or $40 on books just for the convenience of owning them. Often that same person now is checking those books out from the library,” he said.

Much of the material the library lends out today isn’t even printed, he added. It goes out in the form of tapes, DVDs and other electronic media.  Bernie pointed out that the library gives free access for members to some major online databases that otherwise are not available without a user fee.

“We’ve got a free genealogy data base that individuals would normally pay for,” Handzel offered as one example. “And people can get free access to the full Chilton Auto Repair Guides through us also.”

A second key point involves the use of the library's physical space itself. Clearly it does more than hold books.  Among other things, it holds fishing rods also, as part of the specialized fly catching collection that the Phoenicia library maintains. They aren’t on exhibit, they are used in an instruction program for youth that meets at the library and also takes field trips to local fishing spots. Library space is routinely used to stage a number of community workshops, Handzel noted. A recent workshop held on seeking and gaining employment directly resulted in two Shandaken residents, who had both been unemployed for quite some time, getting new jobs.

“We are quite pleased with the results of that workshop,” Handzel said, “We hope to be able to repeat something like that in the near future.”

An upcoming workshop is already planned to help seniors navigate their way through government programs like Medicare and prescription drug benefits, according to librarian Liz Potter. She also mentioned a Saturday morning reading program for children that reaches up to 7 children each week. In the works is a new program aimed at outreach to what Liz describes as “tweeners,” kids aged 8 to 11. Planning for that has begun and the Library expects to launch that program next year.

Former Library Board President Judith Singer, who dropped by briefly during our conversation, had a point she wanted emphasized: “The Phoenicia Library goes beyond what any normal library does that I’ve ever seen, in terms of personal service to its patrons of all types.” Singer attributes that both to the inherent nature of a small-town library and to the positive attitude and talents that Phoenicia’s librarians bring to work with them.

“One of the things that makes the Phoenicia Library special is the spirit of helpfulness that pervades here,” Singer said.  She pointed out that a small town setting allows librarians more of an opportunity to get to know patrons personally than they could at a large library. Singer said that Phoenicia librarians routinely place holds for patrons, without having to be asked, on new books arriving in the system by authors who they know a patron is avidly reading, sometimes before the reader even knows that the book is out.

Handzel told another anecdote: A local librarian noticed a patron having difficulty getting the graphics to work on a new menu they were designing. Calling out to another patron she knew well, who was heading toward the exit, the librarian asked if he had a few minutes to spare to offer some assistance, knowing that he not only had expertise in that area, but also a generous spirit. Thirty minutes later, a new menu that all involved were proud of was completed.

Those are some of the points the Phoenicia Library Board is making in support of its request for additional funding. It is up to Shandaken voters now to decide how compelling a case they make. Can we afford to spend $11,000 more on the Phoenicia library? Can we afford not to? The voters will decide on Tuesday.