DEP opens the Cannonsville to motors -- and watershed land to trails

Above: The Cannonsville Reservoir looking serene, if a bit low on water, in July of 2012. Photo by Flickr user mountain_man_ny_2; published under Creative Commons license.

The agency that manages New York City's water -- and its vast upstate watershed -- is taking another small step toward opening up its reservoirs for public use.

This April, the Cannonsville Reservoir will be opened up to fishing boats with electric trolling motors for the first time. If the pilot program is successful, it may be introduced at other reservoirs, following the example of the city's recreational boating program. Launched on the Cannonsville in 2009, the recreational boating program now allows canoes, kayaks and sailboats on four upstate reservoirs.

The program, according to New York City Department of Environmental Protection (DEP) deputy commissioner Paul Rush, is for fishing boats only. But allowing electric trolling motors will make it easier for anglers to access more of the reservoir, and open up the reservoir to people who are physically unable to row.

Deposit resident Lloyd Hornbeck, avid fisherman and longtime proprietor of Hornbeck's Sport Shop, said that local anglers had been talking with the DEP about allowing motorboats on the reservoir for some years.

At first, Hornbeck said, he had reservations about the idea.

"To be honest, overall, when we first talked about, I wasn't for it, and I wasn't against it. I just want it to be pristine up here," he said. "It's a good thing if people use it right. If they don't start throwing garbage all over and doing crazy things. I'm all for it."

As long as the program goes smoothly, Hornbeck said, it will be a good thing for the region.

"It'll increase business for the area, for the whole town. If more people come, everybody's going to benefit from something like that," he said. "The electric motors, I don't think it's going to be a problem. They're not like a big gas engine."

Rush said that boaters will have to follow strict regulations designed to protect the reservoir from pollution and contamination with invasive species:

-Gas-powered motors will not be allowed on the reservoir.

-All boats on the reservoir must be steam-cleaned by a certified vendor, and for boats with electric motors, the motors must also be steam-cleaned each time the motor is used. The tiny larvae of zebra mussels can lurk in the crevices of motors, and the DEP is determined to keep the destructive mollusks out of city reservoirs.

-Electric motors cannot exceed 55 pounds of thrust, and their batteries cannot exceed 12 volts. The batteries must be marine-grade and sealed, and the motors must be fixed to the boat so they cannot fall into the reservoir.

-If the motor is stored at the reservoir along with the boat, the boater must remove the battery when leaving the reservoir.

-As with the DEP's other boating programs, boaters will need a DEP access permit to boat or fish on the reservoir. New York State law for trolling motors also requires boaters to have a head lantern, a whistle, and an anchor on board.

Rush said that the program is tentatively scheduled to begin on April 1, and to run through the end of the fishing season, on November 30. In February, the DEP will hold a focus group with local anglers to discuss the new program.

If all goes well with the Cannonsville pilot program, Rush said, the agency will consider expanding it to the Pepacton, Neversink and Schoharie, just as the recreational boating program did in 2012.

"The plan will be to evaluate it, and if it goes well, the track record shows that we have expanded to non-terminal reservoirs in the Catskills," said Rush.

Off the table -- at least for now -- is any serious discussion of expanding boating in the so-called "terminal" reservoirs in the city's west-of-Hudson watershed, the Ashokan and the Rondout. These reservoirs are the last stop Catskills water makes before entering the massive underground aqueducts that bring water into New York City. Currently, only non-motorized fishing boats that are stored at the reservoirs year-round are allowed on the Ashokan and Rondout reservoirs.

The DEP is looking for more ways to expand access to its lands and reservoirs, Rush said, but they are proceeding cautiously.

"We have a goal to expand recreation, but we also have to do it in a way that's protective of water quality," he said. "If you look at many water utilities, many don't even allow recreation in the watershed of their reservoirs."

But in 2008, under pressure from upstate watershed residents to provide more public access, the city began opening up some of its land for recreation without requiring users to carry a permit. Over the last year, the agency has opened thousands of acres of recreational land, and is now actively working with outside groups to build trails and access points. While progress has been cautious, it's a major shift for the agency.

Now, the FLTC is actively collaborating with the DEP to build hiking trails on watershed land.

Recently, the FLTC was granted permits to build trails on city-owned land near the Cannonsville. The trail work, which was begun last summer and will continue this year, is relocating long sections of the Finger Lakes Trail from walks along public highways to wooded hikes through city propery.

"This is the first time we've worked with the DEP, and it's only been within the last five years that they've started to open up their land. Previously they wouldn't even let us cross their property," Roberts said.

Another project, which Roberts hopes will begin this summer, is to build a trail to the Rock Rift fire tower, north of the Cannonsville Reservoir. This work would be carried out by the Catskill Mountain Club (CMC), a newer outdoors group for which Roberts serves as treasurer.

"It's one of the last standing fire towers in the Catskills that the public has not had access to, because to get to it, you either had to cross private property or DEP land," Roberts said. 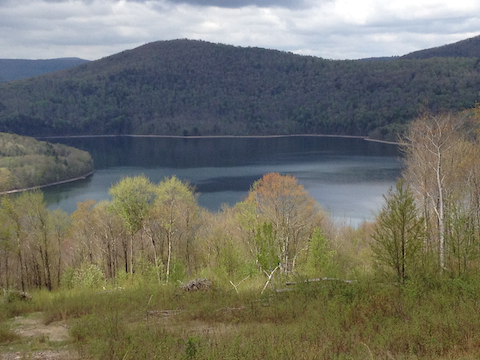 Above: View of the Pepacton reservoir from a New York City-owned parcel of land in Andes, near the Shavertown Bridge, on which the Catskill Mountain Club will begin building trails soon. Photo courtesy of Ann Roberti.

The CMC is also working with the town of Andes to build trails on New York City watershed land. This year, the CMC will begin work on building trails on two land parcels in Andes, one near the Shavertown Bridge and the other on Palmer Hill, said CMC board member Ann Roberti, who has been a prominent advocate for building public trails on city land.

The town of Andes has been granted permits to build trails on both parcels, which will be carried out by the CMC. The group is looking to build easy hikes, Roberti said.

"The Catskills has so many trails that go straight up a mountain, that are only for really avid hikers. We need more for people that need an introductory trail," she said.

Roberti is especially excited about the Shavertown parcel.

"About three-quarters of a mile up, you get to this beautiful pond which had water lilies floating in it last summer, and you also have a beautiful view of the reservoir," she said. "It's really spectacular there."

The DEP's willingness to work with trail-building groups came at a good time for the CMC, Roberti said.

"It was a great coincidence for us, because we said, 'We want to build trails' around the same time [DEP officials] were saying, 'We want to make our land more accessible,'" Roberti said. "We want to do this with other towns, once we get the Andes one under our belts."

Windham gets a windfall

In another first step for the city agency, the DEP recently agreed to transfer ownership of an 815-acre parcel of land in Windham to the state Department of Environmental Conservation (DEC), so the land can be upgraded for recreation. The property -- once a 59-lot subdivision called Windham Park that was never built -- already has an extensive network of roads that can be maintained as trails for hiking and mountain biking.

Windham supervisor Stephen Walker is especially excited about the prospect of opening up more land in the town for mountain biking.

Walker said that the town and the DEC are working with the International Mountain Biking Association to develop a master plan of trails on the land.

The Windham land transfer is the first time the DEP has transferred land in the city's watershed Land Acquisition Program to the DEC, said DEP spokesman Adam Bosch.

Bosch said that as an agency, the DEC is more suited to the task of maintaining the land for public recreation.

"We don't blaze trails, that's sort of out of our scope of work," said Bosch.

According to a press release issued by the DEP, the land will be designated by the state as a "Detached Forest Preserve," and managed for both water quality and recreation.

Andrew Wyrich contributed to the reporting of this story.