Ski season in the Catskills kicks off this weekend

Above: Morning light shows off the early-winter snow on the flanks of Hunter Mountain today. From Hunter's Facebook page.

The Catskills high peaks got a pretty dusting of snow this week, and local ski resorts are poised to take advantage of it. The Catskills Big Three -- Hunter, Windham and Belleayre -- are all making snow and getting ready for Opening Day.

Hunter declared this morning that they'll open on Saturday:

Join us on OPENING DAY this SATURDAY for TOP TO BOTTOM skiing and riding!! Advanced terrain only, lift ticket pricing will be adjusted accordingly.

Neither Belleayre nor Windham has declared an opening day yet,* but both are ready to pounce when conditions are right. Belleayre posted a promising-looking picture of snow falling on the mountain just as dawn was breaking today:

So they say a picture is worth 1000 words... I think we have just one for this and it is WOOOOOO! :) Snow pumping from the guns and falling lightly from the sky? We'll take it. We are planning on opening very soon and we will let you know the second we do! And it will still be a $30 Opening Day special! Let. It. Snow.

On Windham Mountain, there's already a deep layer of snow around the base lodge, and the trails are filling in. A view from one of the mountain's webcams this morning: 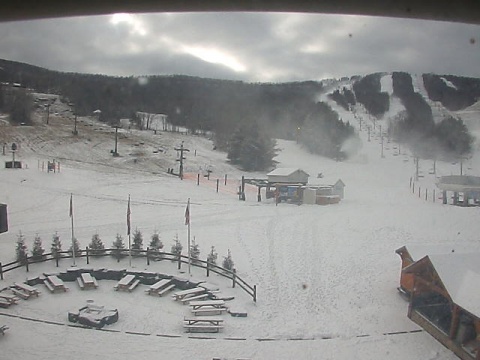