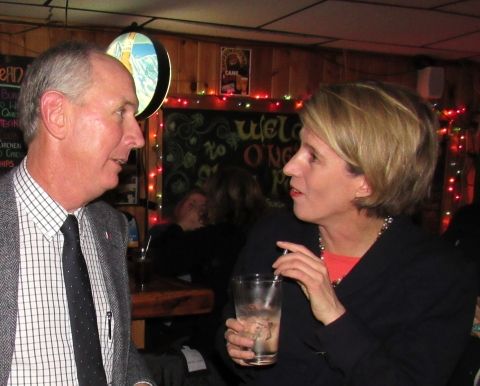 Above: Zephyr Teachout, right, a potential Democratic candidate for the 19th U.S. Congressional District seat, spoke with town of Andes Supervisor Bud Gladstone on Tuesday, Jan. 12 at a gathering in Delhi. Photo by Robert Cairns.

Zephyr Teachout, the Fordham University professor who ran an unsuccessful primary campaign against Andrew Cuomo for governor of New York in 2014, is eyeing a run for the 19th U.S. Congressional District seat being vacated by Republican Rep. Chris Gibson.

Teachout, a Democrat, greeted about 50 supporters on Tuesday, Jan. 12 at the Shire Pub in Delhi. Despite a social media campaign by organizers of the event, Teachout said she had only expected to meet with Delaware County Democratic Committee Chairman Tom Schimmerling and “one or two other people.”

“I'm trying to decide whether I'm going to run for Congress,” she said.

She said, however, that she has not made that decision. “I have a timeline in my head which I'm not going to tell you, but I'll promise I'm going to decide within the next couple weeks.”

When asked if she had examined issues in the 19th District, Teachout said, “Yes, and I think if you look at my record, you can see some of the things I fought for before.”

She said that she would seek to learn more if she commits to a campaign.

“Obviously, if I decide to run, the first thing I'd have to do is just do a lot of listening.”

Teachout declined to say more about a potential run, saying, “I'm just in a deciding and listening mode.” Teachout lives in Dover Plains, in southern Dutchess County. She would be the second Democrat in the race, joining John Kehoe, also of Dover Plains.

“Zephyr Teachout reminds me of Elizabeth Warren, and I would love to see her as our next representative in Congress,” said Mark Pezzati, a graphic designer and resident of Andes, NY. “She is a strong woman who wouldn’t be afraid to stand up to Wall Street or special interests, and I would do anything I can to get her to run.”