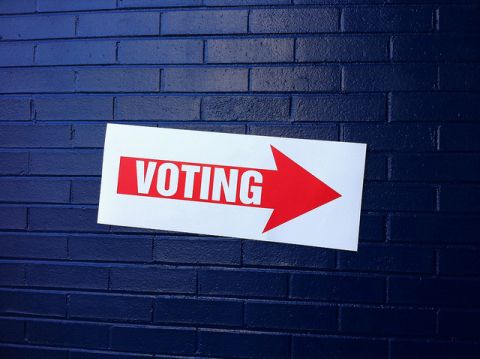 For New York state voters who are registered with a political party, today--April 19, 2016--is the day to vote in New York state's presidential primary election.

It's one of the most exciting primary races in years, with Donald Trump expecting a landslide of Republican votes in his race against Ted Cruz and John Kasich while Hilary Clinton dukes it out with Bernie Sanders for the state's Democratic voters.

The national and international press is watching New York voters--including some in the Catskills--as they go to the polls today.

This past weekend, the Guardian ran an article that interviewed several Catskills locals, including Hancock residents Mark Dunau and Lisa Wujnovich and Sullivan County resident and Catskill Mountainkeeper co-founder Wes Gillingham, about how New York state's ban on fracking has divided the state's electorate:

The lament over lost [fracking] opportunity has appealed to the angry, disillusioned white people who have become Trump’s base, and may help him win the New York Republican primary.

On the Democratic side, the candidates are singing a very different tune. At a rally in Binghamton earlier this week, Bernie Sanders not only praised the ban – he also called for it to go national ... For Wes Gillingham, cofounder of the environmental group Catskill Mountainkeeper, the Sanders campaign echoes the fight to ban fracking in New York ...

“They said Bernie can’t win but he’s winning,” Gillingham said, “and he’s winning on the fracking issue, which years ago we were told we can’t win.”

Polls in Delaware, Greene, Schoharie, Sullivan and Ulster counties will be open from noon to 9 p.m. today.