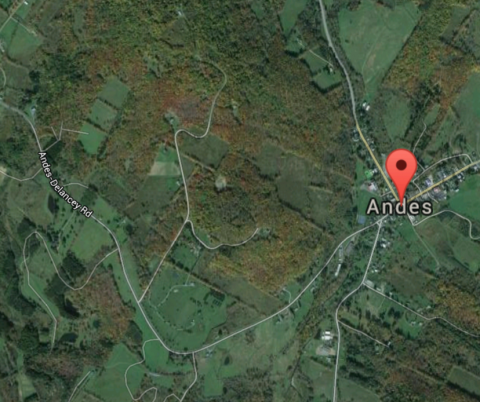 Above: County Road 2 -- also known as the Andes-Delancey Road -- in Andes snakes its way down a steep hill into the hamlet. Image via Google Earth.

A 27-year-old Binghamton man died of "severe head trauma" after crashing his car on a downhill curve in the Delaware County town of Andes on Monday, April 6, police say.

Brendan A. Fields was driving a 2002 Chrysler PT Cruiser south on County Road 2 at 7:40 a.m. on Monday morning when he lost control of the car on a downhill slope and hit a tree, according to a press release from the New York State Police.

The road conditions were icy and Fields was driving at an "unsafe speed" for the conditions, police say:

He drove across the north and southbound lanes and then crossed over the east shoulder, where he struck a tree with the driver side roof and then came to rest in a culvert.

Fields was alone in his car, police say. He was taken to O'Connor Hospital in Delhi, where he died. Dr. Richard Ucci, the Delaware County Coroner, ruled that the cause of death was severe head trauma.

The New York State Police investigated the crash, and Andes EMS and the Andes Fire Department also responded to the scene.