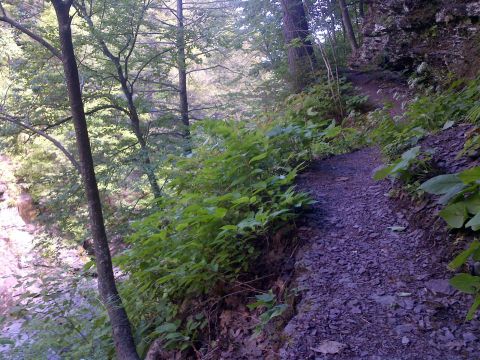 Above: The cliffside path near La Belle Falls in the Greene County town of Hunter where Marcy Yates fell to her death on Friday, Aug. 19. Photo by Forest Ranger Rob Dawson.

Widespread confusion and and eerie coincidence surround the death of a 56-year-old Westfield, New Jersey woman who fell off a cliff alongside Kaaterskill Creek in the Greene County Catskills on Friday, Aug. 19.

The woman, Marcy K. Yates, was hiking on Friday with her boyfriend and another companion when she lost her footing and fell 50 feet off the side of a ravine bordering the creek in the Kaaterskill Wild Forest section of the Catskill Forest Preserve.

Oddly, Yates is the second person from the town of Westfield, New Jersey to die in this part of the Catskills in less than a month. Last month, a 17-year-old man named Ezra Kennedy, also from Westfield, died in a similar fashion: falling off a cliff while hiking.

Numerous media outlets have erroneously reported that Yates died where Kennedy died: at Kaaterskill Falls, a 260-foot double-decker waterfall located in the town of Hunter that has been the scene of several previous deaths. Kennedy died after falling off the lip of the lower section of the two-tier waterfall on July 27.

But, contrary to reports in the Catskill Daily Mail, the Albany Times Union and NJ.com, Yates died nowhere near Kaaterskill Falls.

Instead, she died about three miles east on a narrow, unmarked trail just off of Route 23A in an area known to local old-timers as La Belle Falls, police and DEC personnel say.

According to interviews with the New York State Police Spokesman Steven Nevel and with New York State Department of Conservation Forest Ranger Rob Dawson, who helped recover Yates's body, confusion has reigned for days about the location of her death.

Yates was hiking with her boyfriend and another companion on Friday afternoon, police and DEC personnel say.

In the Greene County town of Hunter, Kaaterskill Creek carves a steep valley through a mountain wall known as the Catskill Escarpment. The valley, which is called Kaaterskill Clove, runs along the sides of the creek for about five miles between the hamlet of Haines Falls, at the top of the gorge, and Palenville, at the bottom. Two-lane Route 23A runs along the creek, hugging the steep cliffside walls, sometimes at a winding crawl.

Three miles east and downhill in the lower part of the valley, multiple small, unnamed swimming holes and short waterfalls line Kaaterskill Creek as it tumbles down a steep grade alongside Route 23A. One of these is known as La Belle Falls, according to Dawson.

On Friday, Yates and her two companions parked on the narrow shoulder along Route 23A near the border between the hamlets of Haines Falls and Palenville. They then began walking toward Kaaterskill Creek, which runs along the bottom of the gorge, along an unofficial cliffside “herd path” that is so dangerous that even experienced forest rangers avoid it.

“I don’t use it,” said Dawson, who said that he will only walk the path when strapped in with ropes.

As they made their way along the path, Yates, who was wearing hiking boots, fell over the ledge at the side of the trail, according to her boyfriend, who called 911 at around 5:40 p.m.

Yates fell about 50 feet into the steep ravine, according to Dawson, who measured the drop from the ledge at that location this week. (The height of the ledge has been variously reported as 100 feet and 70 feet.)

According to Steven Nevel, a spokesman for the New York State Police, which investigated the incident, Yates landed headfirst on the rocks below.

Her body was found on a pile of rocks adjacent to the creek, police say. She died a few moments after impact, according to the coroner’s report.

While Yates did not die at Kaaterskill Falls, she and her hiking companions apparently thought they were at the famous waterfall when she fell.

Kaaterskill Falls is the most popular tourist attraction in the valley and in the Catskills, drawing about 67,000 visitors per year, according to a recent DEC estimate. But signage directing visitors to the waterfall can be confusing, and many visitors often mistake other waterfalls, like the nearby Bastion Falls, for the famous Kaaterskill Falls.

In the 911 call Yates’s boyfriend made when she fell, he incorrectly told the dispatcher that the incident had happened at Kaaterskill Falls, according to a DEC press release.

That confusion caused more. In the initial minutes after the 911 call on Friday, various local fire departments and rescue squads prepared to respond to Kaaterskill Falls.

But Dawson, who was stationed at Kaaterskill Falls at the time the call came in, looked around and saw nothing.

So first responders throughout the town of Hunter scrambled to figure out where Yates and her group really were.

Soon, they noticed a car matching the description given by the 911 caller parked along Route 23A in the La Belle Falls area, according to Dawson.

A New York State Trooper and a paramedic were the first to reach Yates’s body at the bottom of the ravine, according to a DEC press release. She was dead when they arrived, and they made no medical efforts to revive her, state police say.

Five DEC forest rangers recovered Yates’s body using a “high angle technical rope system,” according to a DEC press release. A coroner arrived at 8:30 p.m. to examine Yates’s body and reported that the time of her death had been around 5:42 p.m.

An autopsy was performed on Saturday, Aug. 20 at St. Peter’s Hospital in Albany, according to the state police.

According to a report in the Daily Mail, Greene County Coroner Richard Vigilo said that the cause of Yates’s death was “massive trauma to the chest.”

Hiking the Catskills ski mountains in summer
Despite safety improvements, another death at Kaaterskill Falls