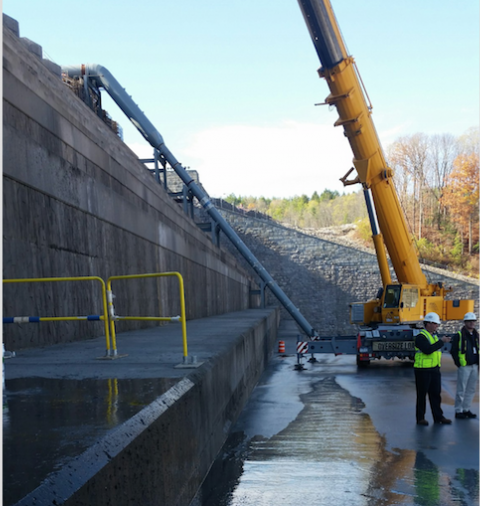 The New York City Department of Environmental Protection (DEP) wants to regularly release water downstream into the Schoharie Valley for the first time since the Schoharie Reservoir was built in 1927, according to a press release issued by the agency on Friday, March 20.

Right now, most of the water from the Schoharie Reservoir is channeled through an 18-mile tunnel into the Esopus Creek in Ulster County. From there, it enters the Ashokan Reservoir and goes on to New York City.

The Schoharie Reservoir stores 19.6 billion gallons of water and supplies 15 percent of the city's drinking water every day. Beneath the dam's mammoth, recently rebuilt spillway, the Schoharie Creek is usually stagnant and dry.

But during extreme storms, the reservoir overflows, and water runs down the dam's spillway into the creek, which is prone to disastrous flooding downstream. In 2011, during Tropical Storm Irene, eight feet of water spilled over the dam. Downstream, much of the Schoharie Valley flooded. Since then, the dam has been reinforced.

The DEP's proposal to regularly release water into the creek is a response to years of lobbying by residents who live downstream. Many have lived in fear of flooding for generations. The valley below the Gilboa Dam is dotted with sirens that are designed to sound if the dam fails, to warn residents to get to higher ground.

To prevent the dam from spilling over during floods, the DEP wants to keep 10 percent of the reservoir empty from October 15 to March 15 to create a buffering "void" to accommodate snowmelt and rain in the early spring. Releasing water from the reservoir into the Schoharie Creek during the wet season -- fall, winter and early spring -- would also help re-establish habitats for birds and fish.

In the DEP's press release, Richard Lape, the chairman of the Schoharie County Board of Supervisors, has an enthusiastic quote calling the DEP "a good neighbor."

“Creating a void in the Schoharie Reservoir to blunt the impact of potential floods is an historic first step in protecting the community," he said, according to the press release. "The addition of the sustained cold water releases for fishing and recreation is also long-awaited good news. The City of New York is listening to us.”

Currently, two siphons snaking over the top of the Gilboa Dam can release water into the creek, but they have a finite capacity  -- "when they're on, they're on," Bosch said. This makes it difficult to make fine-grained changes to the amount of water being released.

Still, as soon as the DEP receives state approval, it will begin releasing enough water to create the 10 percent void, Bosch said.