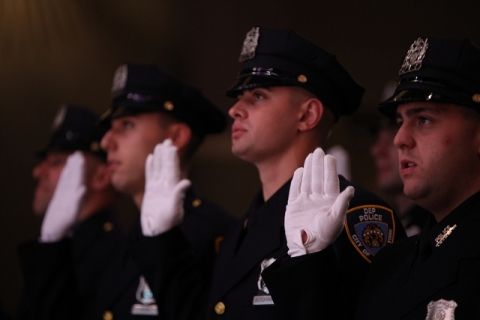 Above: New Environmental Police Officers being sworn in to their jobs patrolling New York City’s upstate watershed, which spans a 2,000-square-mile area, much of it in the Catskills. Photo via the New York City Department of Environmental Protection’s Flickr page.

The police officers who patrol New York City’s 2,000-square-mile upstate watershed are suing their own union, accusing it of corruption and of scuttling a long-awaited contract with the city.

In a class action lawsuit filed in federal court in January on behalf of 200 officers, three police officers say that the union’s leadership has betrayed them.

The watershed cops have been fighting New York City over a new contract since 2005 for better pay and more benefits. So last year, the officers were delighted when their union president, Kenneth Wynder, announced that the union, the Law Enforcement Employees Benevolent Association (LEEBA), had signed a contract with New York City that granted them pay raises.

In fact, it wasn’t a contract. It was a memorandum of agreement that promised raises but also served as a starting point for more negotiation. A year later, the union and the city are still at the bargaining table.

In the meantime, the union's leaders are facing a rebellion.

Signing the agreement "betrayed us"

This January, a trio of DEP police offices filed a class action lawsuit on behalf of 190 of their colleagues against LEEBA in federal court, alleging that the union’s leadership has botched contract negotiations, misappropriated funds, broken the union’s bylaws and engaged in fraud and corruption.

The officers are particularly upset, they say, that LEEBA did not allow union members to review or vote on the proposed memorandum of agreement (MOA) that the union signed with New York City in 2014.

“Wynder signed the MOA without pursuing membership ratification, in direct violation of rights portrayed in the 2010 Bylaws,” the lawsuit states.

Robert Mateer, an EPO stationed in Margaretville who is one of the officers suing the union, said LEEBA's decision to sign the memorandum of agreement turned him against the union's management.

"Even though there were many aspects of the leadership of LEEBA that concerned me, I continued to support them because overall I felt we were going in the right direction," Mateer said. "That was until I became aware of the ramifications of his signing of the MOA. That's when I realized he had betrayed us. Some where along the way, Mr. Wynder forgot that he works for us."

Wynder declined to comment on this story, citing ongoing litigation.

Marshall Vandermark, a 64-year-old retired sergeant who spent 34 years as a DEP police officer, is suing the union and is also running for union president in a bid to unseat Wynder, who has served as union president since 2005. As union president, Wynder made a salary of $79,600 in 2013, according to a financial report filed by the union. (Most watershed police officers make between $50,000 and $61,000 per year.)

“The big concerns are that [LEEBA’s leaders] aren’t following the members’ wishes,” Vandermark said. “The second concern is that they’ve been squandering the money that has come to them, between our union dues and welfare fund. They haven’t been paying our bills.”

In the lawsuit, Vandermark and his fellow officers allege that LEEBA’s executive team has indulged in a host of improper practices.

They argue that LEEBA failed to file federally-required financial disclosure forms with the U.S. Labor Department for eight years in a row and that Wynder, their union president, has appointed himself president-for-life, refusing to hold regular elections or to obey the union’s three-year officer term limit. They say that Wynder also improperly changed the union’s bylaws in 2014, and that the union’s management “orchestrated, structured, and implemented a corrupt business scheme to profit” from union dues.

According to court documents, Mateer has visited LEEBA’s office in the Greene County village of Catskill several times and has found it unoccupied. LEEBA pays $12,000 per year in rent at that office, and spends another $55,000 per year for general “association overhead,” according to its 2013 financial filings.

Thomas Terminelle, an environmental police officer stationed in Yonkers, is the third plaintiff in the lawsuit against LEEBA. He said that many watershed police officers aren't receiving some union benefits that their dues are paying for.

Terminelle's drug prescription card has not been renewed since 2009, he said.

“We believe all the money is going out the window to the [union] president and the lawyer,” Terminelle said. “This is screwing about 200 DEP officers here. Not only are we getting screwed by the city; now our own union is screwing us, too.”

Attorney who won award walked out

According to court papers, Merritt was fired after he walked out of contract negotiations in July 2014. Merritt left because he believed that signing the 2014 memorandum of agreement voided the rights the police officers had won in the arbitration award.

“Merritt proceeded to gather his belongings and walk out of the room after telling those assembled in the room that they were on their own,” LEEBA’s attorney wrote in court documents. “LEEBA was still in the middle of its negotiation session and had to return to the negotiation table after the break with Merritt visibly absent.”

Merritt is now embroiled in his own lawsuit with LEEBA. Merritt argues that LEEBA owes him money, and LEEBA is accusing Merritt of malpractice.

Ronald G. Dunn, a legal expert at Gleason, Dunn, Walsh & O’Shea in Albany, said that while it is possible that LEEBA could have engaged in improper labor practices, those aren't necessarily crimes.

“If the union enters into an agreement and they don’t take steps to get people to vote on it, then that union has engaged in an improper practice,” Dunn said. “That is not a crime. Crimes, in a union context, usually means the taking of money. That’s a different story.”

Dunn specializes in labor and employment law and has represented many police unions in New York. When he spoke with the Watershed Post, he was scheduled to become involved in the LEEBA case, but had not yet had had a meeting with either side.

Jennifer Rudewicz, the supervisory investigator for the U.S. Department of Labor’s Office of Labor-Management Standards in Buffalo, said that she could neither confirm nor deny whether the Department of Labor was investigating LEEBA for criminal infractions or improper labor practices.

Dunn said that fights like the one between the watershed’s police officers and their union are common.

“It sounds like a very typical union fight to me,” he said. “If the union leadership negotiated an agreement and the membership didn’t want the leadership to negotiate that agreement, that usually means that [the union’s leadership] has lost the trust and confidence of the membership.”

“That means we may want to schedule an election and vote you out, or form a new union, and have a new union take over,” he said.

The disgruntled watershed police officers are exploring these options.

Vandermark, who retired from the DEP formally at the end of February, is running for union president of LEEBA against Wynder. If he is elected, he said, he will not accept a salary.

“I would want to set the place up so that it’s perfectly legal, set up the way it’s supposed to be run, and then I’d walk away,” he said. “My problem is that I’m 64 years old. The only reason I’m doing it is that I have a lot of friends on the job.”

With judge's ruling, DEP officers may finally get cop benefits