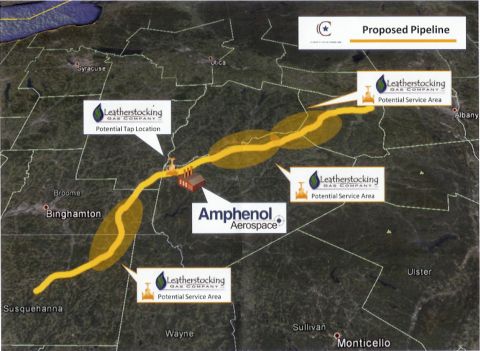 Above:  A map of potential natural gas service areas near the Constitution Pipeline, issued at yesterday's press conference.

In an attempt to build support for their proposed 124-mile natural gas pipeline, Constitution Pipeline officials announced yesterday that they will work with local utilities to deliver natural gas to businesses and residences in four locations along the pipeline.

The announcement is the latest twist in a fractious debate over natural gas within the town of Sidney, where an attempt to ban natural gas drilling was struck down by a state judge in January.

The Constitution Pipeline plan also has been the object of fierce controversy. Opponents, many part of the group Stop the Pipeline, fear that the project will open the door for the gas drilling industry to expand in New York. Proponents, including many elected officials and business owners, hope that natural gas, currently a cheap fuel because of the US shale gas boom, will lower energy costs in the rural Catskills and create new jobs. The loudest voice on the business side is Amphenol Aerospace, which hopes to save over $1 million in annual fuel costs by switching to natural gas.

If approved by the Federal Energy Regulatory Commission, the New York State Department of Environmental Conservation, and the U.S. Army Corps of Engineers, the Constitution Pipeline project could break ground as early as January 2015, according to the project's manager, Matthew Swift.

The pipeline is slated to run through Delaware and Schoharie counties in the northwestern Catskills. The FERC issued a draft environmental impact statement for the project on February 14, and is taking public comments on the document until April 7. To read and comment on the draft, click here.

Four delivery taps will be installed along the pipeline's route, Swift said at a press conference in Sidney on Tuesday, March 18. Leatherstocking Gas Company, a joint venture between Corning Natural Gas Corporation and Mirabito Energy Products, will handle local delivery of the natural gas to businesses and homes.

Below: Jim Eisel, the chairman of the Delaware County Board of Supervisors, speaks at a press conference at Amphenol Aerospace on March 18, 2014. Photo by Julia Reischel.

The plan is to create "local natural gas distribution as early as 2016," Swift said.

One of the four delivery taps is slated for Sidney, a town of 3,900 in western Delaware County, thanks largely to its largest employer, Amphenol Aerospace, which was also the host of the press conference.

Amphenol's headquarters in Sidney was badly flooded twice in five years -- first in 2006, then in 2011. A variety of state and federal incentives convinced the company to build a new facility on higher ground in Sidney rather than leave the town.

Amphenol has received a $750,000 grant from the Delaware County Industrial Development Agency to connect to the pipeline to its new facility in Sidney.

The possibility of access to energy is one of the main reasons that Amphenol decided to remain in Delaware County, said Richard Aiken, Amphenol's general manager.

The new Amphenol facility will open its doors this May, Aiken said.

Before it issues a permit for the Constitution Pipeline, the FERC is holding a round of public hearings on the project. For dates of the hearings, see below:

Update, 3/20: This post has been updated to include the starting times of the upcoming public FERC hearings on the pipeline project.