DEP and Delaware County set aside differences during Sandy 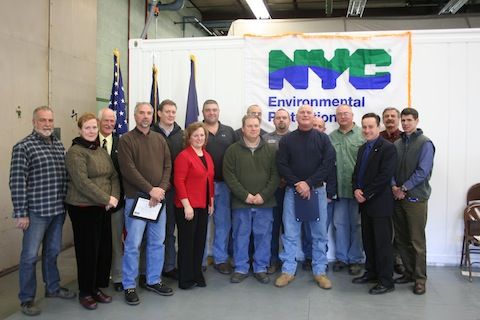 Above: A group of DEP and Delaware County employees who worked together on storm recovery in Queens were honored in a ceremony in Downsville on Friday. Commissioner Strickland is fifth from left. Also in the photo are Jim Eisel, chairman of the Delaware County Board of Supervisors, New York State Assemblyman Peter Lopez, DEP Deputy Commissioner Paul Rush, and town of Middletown supervisor Marge Miller. In total, 58 people were honored at the ceremony, including DEP workers who helped pump out tunnels in Manhattan after the storm. Photo provided by the DEP.

The Catskills have a long history of battling the New York City Department of Environmental Protection over water and the reservoirs the city operates on upstate land. A popular bumper sticker around Delaware County reads "DEP Get Off Our Backs," and earlier this year the county demanded $81.3 billion dollars from the agency in reparations for lost natural gas revenue on watershed lands.

But lately, Delaware County's relationship with the DEP has been downright cordial. On Friday, the county and the agency held a joint ceremony honoring teams of workers sent by both organizations down to New York City after Hurricane Sandy.

According to the press release, a group of DEP staffers with industrial-sized pumps helped pump out Manhattan’s Battery Underpass, a sewage pump station in Brooklyn, and a City Department of Education facility after the storm. Another team -- which included staffers from both the DEP and from the Delaware County Department of Public Works -- helped clear downed power lines and storm debris in Queens. And a third team manned generators at an emergency operations center.

Someone needs to send the brotherly love memo to Ulster County Executive Mike Hein, who is in a full-out rhetorical war with the DEP over the issue of silt-filled water releases in the county's Esopus Creek.

Read the full press release below:

New York City Environmental Protection Commissioner Carter Strickland today honored 52 DEP upstate employees and six members of the Delaware County Department of Public Works for their exemplary work in the aftermath of Hurricane Sandy. The high winds and record storm surge that accompanied the Hurricane resulted in tens of thousands of downed trees, nearly half a million people without electricity and flooding to critical infrastructure throughout New York City and the work of the honorees helped some of the hardest-hit communities in the city begin the recovery from the historic storm. Commissioner Strickland was joined by DEP Chief Operating Officer Kathryn Garcia and Deputy Commissioner for Water Supply Paul Rush at the ceremony, which was held this morning at the DEP Facility in Downsville.

“The winds and storm surge of Hurricane Sandy devastated portions of New York City and thankfully we were able to mobilize these staff and resources from upstate to aid in the recovery effort,” said Commissioner Strickland. “We are grateful to Supervisor Eisel and Delaware County for their support in this effort and for the extraordinary dedication of all the volunteers that helped New York City begin its recovery.”

“Delaware County was proud to help New York City residents recover from damage left in the aftermath of Hurricane Sandy,” said Delaware County Board of Supervisors chairman James Eisel. “We were fortunate to have the help of New York City after Hurricane Irene and the June 2006 flood damaged many of county’s homes and businesses. After each of these devastating storms, Delaware County and New York City have shown that true partners work together best in times of need.”

Immediately after the storm, two teams of upstate workers were deployed to New York City to assist in areas that were most affected by the storm. The first team – known as Task Force Godwin for the industrial sized pumps they operated – arrived in New York City on October 30th and worked continuously to remove flood water from several critical locations over the span of seven days. They helped to pump out Manhattan’s Battery Underpass, a sewage pump station in Brooklyn, and a City Department of Education facility.

The second team – known as Task Force Chipper – worked with the New York City Parks Department to remove trees and limbs that had fallen on power lines, homes and across streets in some of the hardest hit neighborhoods in Queens. Its members arrived in New York City on November 1st and worked continuously for over two weeks, returning home on November 16th. In response, many Queens residents wrote letters to thank the task force for its quick and professional work.

Task Force Chipper included six employees from the Delaware County Department of Public Works, which volunteered its manpower and equipment to help with the tree removal. Their assistance underscored a longstanding partnership between DEP and Delaware County that dates back decades. During previous storms that flooded upstate communities, DEP had sent employees based in New York City to help pump out basements and homes in Delaware County.

Additionally, as the storm approached, upstate staff from DEP’s Bureau of Water Supply quickly set up an emergency operations center to ensure reliable communications and prepared generators and key facilities throughout the watershed. As the storm made landfall on October 29th, many of these employees worked around the clock to ensure New Yorkers had a high quality water supply and to remove trees from city roads across the watershed.