The American flag business fades for a Catskills fixture 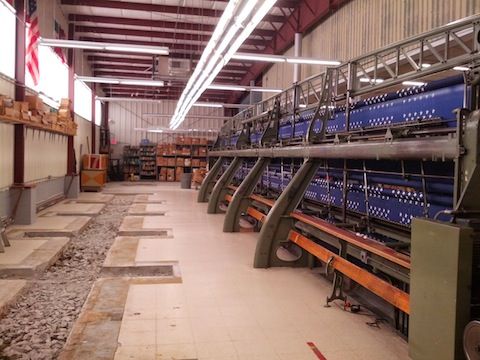 Stucki Embroidery, a small business in the Ulster County hamlet of Boiceville, has been sewing the stars onto American flags since 1973. A decade ago, Stucki stars decorated every flag sold in Wal-Marts across the United States.

But the stars no longer bring in the money that they once did. Stucki has shrunk from 65 employees in 2002 to 13 now. This year, Murray Fenwick, Stucki's owner, sold two of his mammoth embroidery machines. To make ends meet, the business is diversifying into non-star lines of business, such as making small-run embroidered patches and screenprinting.

Left: Fenwick, with the punch card system that powers one of his older embroidery machines. Photo by Julia Reischel.

In May, I wrote an article for Esquire Magazine online about why the American flag business can no longer support small manufacturers like Stucki. Fenwick gave me a tour of the Boiceville plant and a crash course in the economics of the increasingly-conglomerating business of American patriotism.

When you're surrounded by red, white, and blue this Fourth of July weekend, think of supporting local Catskills businesses like Stucki. We used Stucki to embroider our Catskill Reservoir Paddler badges this year, instead of using an out-of-state embroiderer. They did a fantastic job, and we kept the dollars local.

Here's an excerpt from the Esquire story. To read the whole thing, go to Esquire by clicking here.

Even when we Americans are patriotic, we can still be cheap.

"The trend in America is dollar stores," says Fenwick, sitting at his desk, which is strewn with brochures from a defunct embroidery industry association.

"You get a customer like Wal-Mart, and you think it's great," he says. "But they kill you."

The retail price of a standard nylon three-by-five-foot American flag with embroidered stars has hovered between $19 to $24 for over a decade. But the price Stucki got for its stars from its largest customer, Annin Flagmakers, which had a contract with Wal-Mart, kept falling.

"They're trying to compete because Wal-Mart is chiseling them every year," he says. "We just got squeezed and squeezed."

Finally, Annin bought its own embroidery machines to make its stars in-house, cutting Stucki out entirely.

VandenBosch says it's the same across the entire industry. Only the big flagmakers like Annin can absorb the ever-falling prices. The little guys are left out.

"The flag industry in general has been going through a consolidation since 2005," he says. "As demand trickled off, supply was greater than demand, and as a result, pricing pressure started becoming a real issue."

It's not just consumers that want cheap flags. The government does, too.

"They voted it down," says Fenwick, who has been following the bill with interest. "They said American-made flags are too expensive."

Fenwick knows that it's pure economics that is forcing his company out of stars. That doesn't make it any easier.

"I once read an economist who wrote that anything cheaper in some other county should be made there and not in America," he says. "I'd like to find that guy. I'd be very tempted, but I'd probably get arrested for assault if I met him."