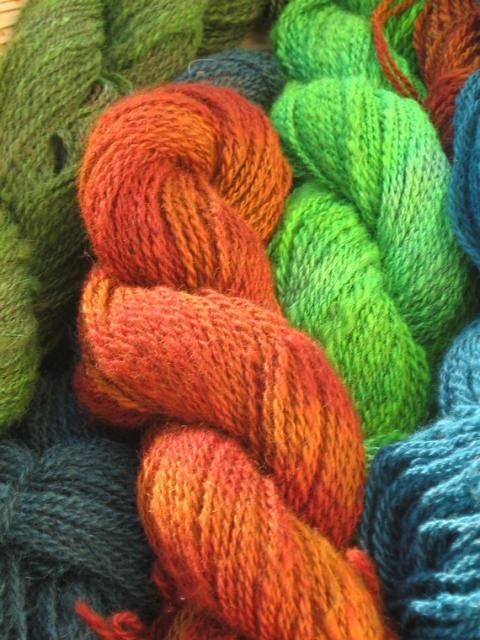 Hand-dyed yarn made by Witch Hazel Feltworks, an Etsy user located in the Catskills.

News broke this week that Etsy.com, an online marketplace that allows craftspeople to sell their wares online directly to customers, is opening a call center in Hudson, in Columbia County.

The company is a hipster favorite -- something like an online crafts bazaar, with over 100,000 sellers peddling everything from crocheted stuff animals to corsets. Devotees of handmade goods spent $41.1 million on Etsy last month, according to the company's CEO.

Etsy's arrival in the Hudson Valley means more local jobs -- and also, as Ivan Lajara at the Daily Freeman points out, more fuel for claims that various HV towns are "the new Brooklyn."

According to a forum post on Etsy's website, CEO Rob Kalin promises that the move will mean new jobs for people in the Catskills region:

Yep, it's true. My family is from New York and I know the Hudson Valley well. I've backpacked most of the paths through the Catskills.

We'll be sharing more about this soon. Yes, we'll be hiring locally. If you're reading this here and are interested, feel free to convo me. Otherwise, stay tuned for more info.

Why Hudson? It's a great town, we found a fantastic building, and I know so many good people up there.

The Etsy outpost will be a customer service call center -- which, as one commenter on Etsy's site pointed out, means that the local jobs won't involve any crafting:

I am sure there is not an artist here that would like this job. you would be bored out of your mind by the third day answering the same questions day after day : )

Still, new jobs are new jobs, in a region that needs them. Hudson-based designer Sam Pratt reports that the company expects to add 50 new positions with benefits. He writes that Etsy's plans to come to Hudson have been an open secret around town for a while:

In my own case, this was first whispered to me during the Valley Alliance’s Halloween benefit party in that location... Like many others, I was told to keep this “hush-hush” as the deal had not been finalized, and talking about it publicly might mess things up.

But now things are official. WGXC has the text of an email Kalin sent to local Hudson businesses earlier this week announcing the move. Kalin wrote:

“I started Etsy to create opportunities in the world — for myself, for small business owners, for people who make things, people who find things, and more ... I love that we are be able to bring jobs to Hudson. Right now we’re working to get things setup. (As of this email, the building doesn’t even have heat! But that’s happening quickly.) Our plan is to start with customer support positions, and grow from there. Etsy HQ will remain in Brooklyn, and I hope to grow our Hudson office to 50 employees or more. Jobs at Etsy come with a salary, benefits (medical, dental, vision) paid for in full by the company (including family plans). We’ll be posting actual job descriptions soon.”

Aside from jobs, Etsy's presence in the Hudson Valley region could be good for the local economy in a deeper way. Etsy's mission is to help artists and craftspeople sell their wares and generate income through the internet. That's a service that could give many Catskills cottage industries a big boost.

The Catskills are full of craftspeople quietly selling homemade goods to their neighbors at community markets and craft sales. And some local artisans are selling on Etsy; check out these Catskills-based Etsy shops. But most aren't selling online -- which means they're missing out on a large and growing market.

One of our goals here at the Watershed Post is to help local businesses take advantage of the internet. If you're an artist or craftsperson interested in Etsy or online sales, but unsure how to get started, we'd like to hear from you. And if you're already selling on Etsy, let us know; we're working on building a guide to Catskills-based Etsy shops. You can reach us at editor@watershedpost.com.

This weekend: Where to buy Catskills-made gifts