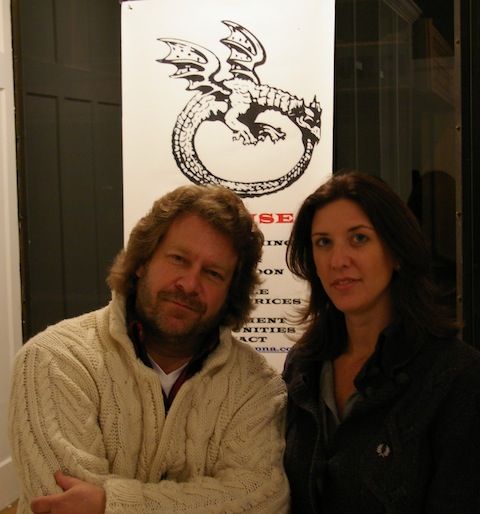 A dingy storefront that has stood empty on Main Street in Margaretville for over a year has been transformed into a men's clothing boutique that wouldn't look out of place on 5th Avenue.

Reprise, the brainchild of Jon and Tiffany Kalupa, is a gleaming white window box stuffed with specimens of what the Kalupas call "up country style." That means chunky knit sweaters, bright tartan jackets, and rugby jerseys, along with natty shaving supplies and underwear that comes in an oversized cigarette pack.

Starting a retail fashion boutique has been a longtime dream for the Kalupas, who, in addition to owning a wholesale fashion supplier in Manhattan called The Avalon Group, also own a house in Roxbury near Plattekill Mountain, in what they refer to as "storm alley."

The couple is enthusiastic about rediscovering treasures from the village's past. Their shop's facade is topped with a glowing antique stained-glass window that reads "Korn's," an artifact of another men's clothing store that occupied the space decades ago. Korn's sign was buried under siding and forgotten before the Kalupas unearthed it.

But, perhaps inevitably, the abrupt appearance of a fashion-forward boutique right next to the Village Pub is causing some culture clash. The day before Thanksgiving, with the store still under construction, a curious villager stopped by with some unsolicited advice.

"You'll make a fortune selling denim," the man told the Kalupas. "Denim and cowboy hats. That's what the men around here want to buy. But if you sell fine silks, you won't last long."

For their part, the Kalupas want to carry something for everyone. Jon Kalupa talked with the Watershed Post about his dreams for the new store and the challenges of starting it in a small Catskills village earlier this week.

Watershed Post: Why did you decide to open a men's fashion boutique here in the Catskills?

Jon Kalupa: Reprise is the the retail arm of our fashion showroom in New York City. We've always been looking for a retail outfit for the wholesale business that we've taken on in our New York City life. The economics have made it feasible to do it here. We've been thinking about this for quite some time.

WP: Where does the name come from?

JK:  Originally, Reprise was a record label that was started by Frank Sinatra in 1960. It was the very first record label created by an artist in order to stretch his artistic freedom. We were inspired by that. That's where the name came from. We like these interesting projects that require a tremendous whirlwind of energy and an outgrowth of creativity. In fact, our logo is the medieval symbol of organized chaos: a dragon eating his tail, Ouroboros. Obviously, the literal connotation of "reprise" is a re-imagining of what was once old and is now new.

WP: Speaking of that, you are located in a venerable Main Street storefront that looks nothing like it looked three months ago. What have you done to this place?

Flagship product: Alpha Industries' bomber jacket, modeled by Lou KolarJK: Our objective was to seek out and try to re-imagine some of the 19th-century charm of the space. In doing so, as we removed the small front paneling of the facade of the building, we we discovered that the space, at the turn of the 20th century, was in fact a clothing store called Korn's. As we started to clean away some dust and a few old bunnies in the woodwork, we found this beautiful stained glass signage. A quick little search on the internet showed that Korn's existed in 1989. I was finding old advertising online in 1926 and 1924 in Margaretville and over in Arkville. Therein lies the essence of Reprise. Between the three main groups that come here -- full-time residents, tourists and second-homeowners -- everyone connects on the essence of looking backwards to find the future.

WP: Describe your store -- what kind of shop it is?

JK:  Reprise is a modern men's boutique hat is going to specialize in up country style. We really envision having something for everybody. Our ethos is really rugged prep. We'll have full chunky sweaters that will be imported from Scotland. Parkas from a wonderful outerwear company that produces exclusively for the U.S. military. We're going to import men's apothecary from London. We'll have a whole collection of men's shaving accoutrements from Taylor of Old Bond Street, London. They specialize in badger-fur shaving brushes. Alpha Industries will be our resource for beautiful men's outerwear. We have a beautiful leather pilot's jacket that's fantastic, with a sherpa collar.

WP: What would you say is your store's showcase product?

JK: The top end is a Scottish designer called D.S. Dundee. From a price, quality, and value standpoint it's the very top of what we'll offer. That's true country elegance. There is a beautiful Scottish tweed shooting jacket.

WP: What else will you carry?

JK: Sportswear. Canterbury of New Zealand is the original supplier for the New Zealand All Blacks rugby team. There's Rufus, a shirt company out of New York City. Fantastic socks that are styled out of Scandinavia for ten bucks. Men's underwear, called Sexy Bastard, which comes in its own cigarette pack. And there's always going to be one little rack of little special items that, if you happen to find your size, will have really great prices. I don't want anybody to walk out of my store saying, "Oh, that's that really expensive place." I want everybody to enjoy Reprise.

WP: Here's a burning question I'm sure many of your potential customers are asking: Why Margaretville?

JK: We get often asked, "How did you find this area?" And we were discussing it on our many trips back and forth. We really don't think that we found this area; this area pretty much found us. It's a magical place. Every time that we turn over a new rock, we seem to find something that's new and interesting everywhere we go here.  I think the downtown shopping street of Margaretville could be on the cusp of a wonderful renaissance. Hopefully we can inspire others to follow along in this same path.

WP: What's your favorite item in the store?

JK: That sherpa-collared pilot's jacket. That's a beautiful coat. It's an authentic piece that you would have seen on bomber pilots in the 1940s.

Reprise, at 812 Main Street in Margaretville, will be open 10am to 6pm, seven days a week, during the holiday season.