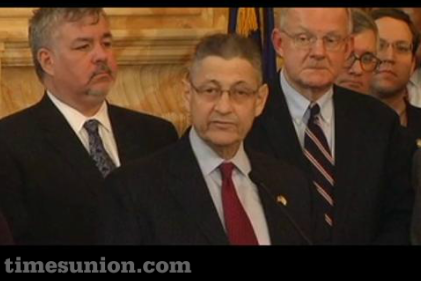 Above: Screenshot of a video from a Wednesday morning press conference by Assembly Speaker Sheldon Silver and fellow Assembly Democrats on a bill that, if passed into law, will place a two-year moratorium on fracking in New York State. Source: The Albany Times-Union's Capitol Confidential blog. Watch the full video below.

A bill placing a two-year moratorium on hydraulic fracturing in New York State passed the Assembly by a wide margin on Wednesday, March 6, and is now headed for the Senate, according to several news reports.

If signed into law, bill A.5424, which has local Assemblyman Kevin Cahill as one of its sponsors, would suspend gas drilling permits in the Marcellus and Utica shale until May 15, 2015, and require the state to complete a review of the public health impacts of hydrofracking before any permits can be issued.

Gannett's Jon Campbell reports that the bill was passed largely along party lines in the Democratic-controlled Assembly, and that its fate in the more evenly divided Senate is uncertain:

The Assembly has passed similar bills in recent years, but the Senate hasn’t taken up any hydrofracking legislation since 2010. That year, the Legislature passed a temporary moratorium that was vetoed by then-Gov. David Paterson, who instead directed the DEC to complete a second draft of the environmental review.

But there are now a numerical majority of Democrats in the Senate after it was controlled for the past two years by Republicans. Senate Republicans had blocked any fracking bills from coming to the floor for a vote. The GOP, however, still controls the Senate as part of a power-sharing agreement with the Independent Democratic Conference, a five-member caucus of breakaway Democrats.

A member of the IDC, Senator David Carlucci -- whose 38th District includes Rockland and part of Orange County -- is a vocal critic of hydrofracking, and has introduced a similar moratorium bill in the Senate. The entire five-member IDC is supportive of Carlucci's legislation, the Times-Union's Casey Seiler reported Tuesday.

But for the bill to make it to the Senate floor, Senate Republican leader Dean Skelos must allow a vote -- and Skelos has been noncommittal. The Times Herald-Record's Steve Israel quotes a Skelos spokesperson on today's Assembly vote:

“(Senate) Majority Leader (Dean) Skelos believes the DEC and Health Department should be allowed to complete their study, so the Governor can make his decision as soon as possible,” said a spokesman for Skelos.