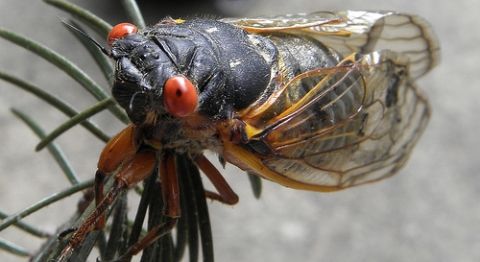 Brood II: It sounds like a low-budget horror movie. But it's real, and it's poised to engulf the East Coast from Georgia to Connecticut, an onslaught of giant bugs that have lain dormant underground for the last 17 years.

The periodical cicada is the Methuselah of insects, spending long years underground in larval form before emerging en masse in tremendous numbers. Groups of 13-year or 17-year periodical cicadas that emerge together are known as 'broods,' and New York State is home to several of them, along with several species of annual cicadas that emerge every year. The last mass cicada emergence in New York, of the 17-year Brood XIV, happened in 2008.

This spring, it's Brood II's turn in the spotlight. Once the soil temperature 8 inches below the surface reaches 64 degrees, the larval cicadas that have been waiting 17 years to crawl up into the sunlight will begin to emerge. Their above-ground adult lives last just a few short weeks -- enough time to molt, mate, and lay their eggs in the young twigs of trees. But while they're here, they're impossible to ignore, swarming over trees and bushes, littering the ground with their crunchy exoskeletons, and piercing the early-summer air with their 100-decibel mating calls.

Backyard biologists across the Northeast are having a field day with the upcoming cicadafest. The Internet has grown in leaps and bounds since the last major cicada emergence in the region, so it's no surprise that Brood II's emergence has spawned some new social media tools. Radiolab, a radio program from WNYC in New York City, is tracking Brood II with the help of citizen scientists armed with DIY soil-temperature detectors. Below is a map of soil temperatures from Radiolab's Cicada Tracker.

True to their name, the folks behind the website Cicada Mania are really excited about Brood II. On April 16, blogger Dan Mozgai reported that the nymphs were just beginning to emerge in his backyard in Methuen, New Jersey:

It’s clear that the cicadas are ready to emerge, and are just waiting for the temperatures to get a little warmer (to warm their bodies to around 64 degrees F). Today reached 72 degrees F. It will reach 77 F on Friday, and some will likely emerge. Saturday temperatures will be back down to 39 F. These cicadas will likely be confused for a little while.

Cicada Mania's fervent insectophiles do know that not everybody is as gung ho for the emergence of Brood II as they are. They've helpfully written a Cicada Wedding Planner to help couples plan to avoid playing host to hundreds of crawling, shrieking party-crashers.

Along with the bugs themselves, the Catskills area may get a wave of cicada tourists. Riverhead Local reports that because of deforestation and habitat destruction, Long Island is not expected to get a mass emergence of Brood II cicadas. Entomologist Dan Gilrein of Cornell Cooperative Extension is encouraging Long Islanders to take a trip up north to see what they're missing:

"Though the periodicals are more docile, all cicadas are harmless,' said Gilrein. "I encourage people to go experience them to see how gentle they are."

He said interested parties should head up to the Catskills next month if they want to experience the Brood II bloom this spring.

Though periodical cicadas are not expected on Long Island this year, Gilrein said he would be interested to learn whether there are remaining remnants of Long Island's historical Brood II population.

"I'm sure social media will be helpful in that," he said.

Are you seeing signs of cicada emergence around the Catskills? Got any good local cicada stories from past broods? Let us know at editor@watershedpost.com.

New report: Almost half of households in NYS (and Catskills) struggle to pay the bills

Cicadas on the march