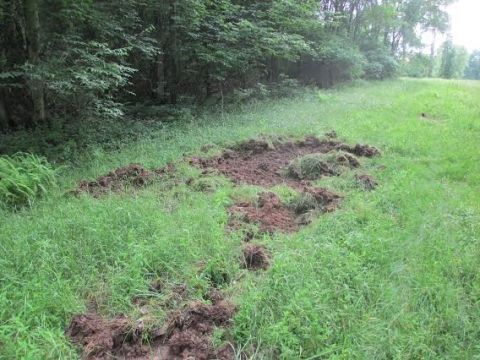 A few weeks ago, it happened again: A group of boars escaped from Trunirz's Goldsmith Road property in the Sullivan County town of Bethel. A neighbor said the group included two "very pregnant" sows, according to a report from TWC News.

Since early July, USDA wildlife officials have been in the field in Bethel, trapping and shooting the escaped animals. It took about three weeks, but USDA biologist Justin Gansowski said he believes the agents got them all.

"At the end of last week, we got the last adult we knew about," Gansowski said. "We're still monitoring to make sure there are no other Eurasian boar on the landscape. And we will continue to monitor to make sure we haven't missed any."

Over the course of three weeks, Gansowski said, a USDA team killed seven boars in Bethel. A few others returned to their pen and were recaptured. A few were young piglets, he said, indicating that the animals are breeding.

The escaped boars did some damage before they were rounded up, Gansowski said.

"There was a lot of damage to lawns and natural resources, rooting in the woods," he said. "They rooted right up to a tennis court on one property. The fence stopped them."

Trunirz, the owner of Pond Ridge Hunts in Bethel, keeps the animals on his Bethel property as well as a wooded preserve in Hancock. In the past few years, boars have escaped from both properties multiple times and run amok in nearby woods and fields, to the exasperation of both neighbors and local officials.

Wild boars can spread disease, attack people and animals, and wreak massive damage on the landscape through their aggressive rooting. The animals are a multi-million-dollar problem in states where they have become established. Once a breeding population is established, it grows quickly, and is difficult to eradicate.

So far, only a few isolated populations have been spotted in New York State -- all the descendants of escaped pigs from "canned" hunting operations like Pond Ridge Hunts -- but their presence worries state and federal wildlife officials, who are anxious to keep wild boars from gaining a foothold in New York State.

A new statewide ban on wild boar hunting went into effect this year, in an effort by the state Department of Environmental Conservation to curb the deliberate introduction of Eurasian boars into the wild by hunters. But enclosed hunting operations like Pond Ridge Hunts are still legal -- for now. On September 1, 2015, another piece of the state's new Eurasian boar law will go into effect, making it illegal to keep, sell or transport the animals.

Until then, all state and federal wildlife agents can do to keep boars from running wild in Sullivan County is to watch for more of the wily animals to escape.