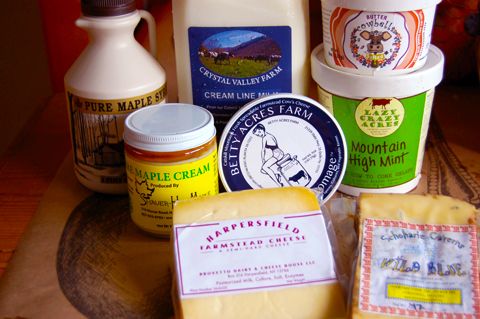 Above: A selection of Catskills dairy products. Photo by Toni Brogan.

The locavore movement has made a celebrity of many a humble ingredient, sparking a renaissance of old-fashioned vegetable varieties and elevating the lowly pork belly to the level of haute cuisine. But through it all, milk has mostly remained, well, milk—and the local-food revolution has left most dairy farmers behind.

For farmers in the Catskills, once a proud and prosperous dairy region, the modern milk market is a tough one. In the world of commodity milk, where the milk from many farms goes into a single vat for processing and prices are set by federal law, small upstate New York dairy farmers have a tough time competing with vast feedlots in the midwest and California.

But the very factors that make it difficult for Catskills farms to succeed on the commodity market—small herds, pasture-raised cows and strict environmental standards imposed by watershed regulations—can be powerful lures for locavores. In the last decade or so, traditional dairy farmers in the Catskills have opted out of the system and begun making “value-added” products from their milk: yogurt, gelato, small-batch cheeses or even their own lines of locally-branded milk.

“The reality is that if you want to farm, you need something to go along with it,” says Karen Fairbairn, who owns Lazy Crazy Acres in Arkville with husband Jake Fairbairn, whose family has farmed here for almost 200 years. “That’s especially true if you’re dairy farming.” To local foodies, Lazy Crazy Acres means dessert: its unfussy little hand-packed pints of gelato contain some high-octane deliciousness. (They also incorporate locally sourced trimmings, such as chocolate chunks from Shokan’s Fruition Chocolate and fruit from neighboring farms.)

But the Fairbairns, who ran a traditional dairy operation until 2009, are farmers first: They say making gelato is a way to support their “farming addiction.” To stay on the farm in a tough economy, the Fairbairns got creative: building a brand around their gelato, pasteurizing their own milk and sharing equipment and a herd with their neighbors at Crystal Valley Farm.

In 2013, several small dairy farms, including Andes’ Dirty Girl Farm and Franklin’s Sherman Hill Farmstead, joined up to form a new venture called Catskills Family Creameries to explore new ways to market and distribute their products. The group includes both cow and goat dairy creameries, making a wide array of cheeses, yogurts and both raw and pasteurized milk.

Most of the members are regulars at local farmers’ markets. but they’ve also made inroads into traditional grocery stores. At Margaretville’s Freshtown supermarket, milk from Crystal Valley Farm, flavored Tilsit from Harpersfield Cheese, and butter and yogurt from Cowbella share shelf space with national brands. Many local health food and specialty stores also carry Catskills cheese, yogurt and milk.

The biggest market for local dairy is downstate, if farmers can get their wares there. Tonjes Farm in Callicoon was one of the first local dairy farmers to feed into the hungry maw of the New York City Greenmarket. Every Saturday, proprietor Tim Tonjes is a regular in Union Square, where he sells a tempting variety of yogurts and cheeses, from cave-aged raw-milk Caerphilly to creamy fresh ricotta and fromage blanc. (Fortunately for us, Tonjes’ products are also available at farmers’ markets in Sullivan County and a few local stores.)

Traffic between New York and its Catskills foodshed travels both ways. The mountains recently lured one of the city’s bright stars: Jos Vulto, who made a name for himself in New York by producing cave-aged cheese under a sidewalk in Brooklyn, recently built a cheesemaking facility in Walton. He partners with longtime Delhi dairy farmer Dan Finn to make cheese under both his own brand, Vulto Creamery, and Finn’s Highlands of Glenburnie label. One of Vulto’s newest cheeses, Miranda, is a soft little round washed with Meadow of Love absinthe from Delaware Phoenix Distillery.

Another couple of Gothamites who turned in their MetroCards for a pickup truck are brent Ridge and Josh Kilmer-Purcell, aka the Fabulous Beekman Boys, whose book The Bucolic Plague and subsequent Planet Green TV show catapulted the Sharon Springs couple to fame. Ridge and Kilmer-Purcell make cheese with the milk from their goat herd, and have recently begun partnering with other cheesemakers to create new cheeses to sell online and at their Sharon Springs store, Beekman 1802. The first of these, made by Renate Nollen, is Zaacht, a liquidy-soft raw cheese with a bloomy rind.

In addition to handcrafted gelato and an amazing array of cheeses, locavores also have access to raw milk straight from the cow. Under state law, raw milk can only be sold directly to customers on the farms from which it springs, such as Dirie's Dairy Farm in Livingston Manor, open Wednesdays and Saturdays, or Byebrook Farm in Bloomville, whose daily roadside stand runs on the honor system.

This article originally appeared in the print version of the 2014 Catskills Food Guide, our annual publication covering local farms, restaurants and food purveyors. Find a copy near you here. Find a farm, market, restaurant or other food-related business in our searchable, sortable online database here.