"Harvest of Songs" brings lessons about Catskills farms, food and water to NYC 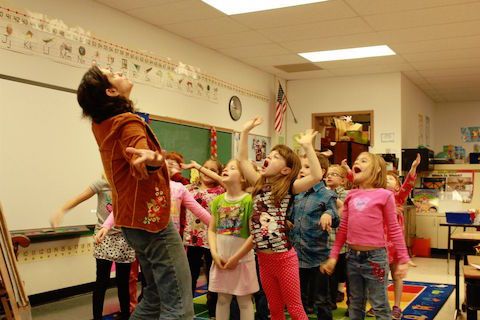 Above: Story Laurie, the Andes storyteller and musician Laurie McIntosh, "sprouts like a seed" with Miss Mostert's kindergarten class in Delhi in 2013 as they write a song about germination. Photo courtesy of Harvest of Songs.

A set of songs written by Catskills and New York City schoolchildren about milking, picking pumpkins, farming and water are the heart of a new educational curriculum aimed at teachers throughout the city and its upstate watershed.

"Harvest of Songs," an educational project funded by local nonprofits Farm Catskills, the O'Connor Foundation and the Catskill Watershed Corporation, launched on Saturday, Oct. 24 with a potluck meal at the Hamden Inn in the Delaware County town of Hamden.

Laurie McIntosh, the artist behind the project, presented her work to the board of Farm Catskills.

"The goal is to reach students in the watershed and students in New York City, " McIntosh said, before launching into a song about bees and pollination and prompting her audience to join in on a "buzz, buzz, buzz" chorus.

McIntosh teaches songwriting workshops in schools across New York. She and her students created seven songs, including a calypso-reggae ditty about growing vegetables called "Who Grew My Soup," a country number about dairy farming called "Milking Time At The Farm" and the call-and-response "I Am An Earthworm."

Above: Laurie McIntosh sings and shakes a packet of seeds at the launch of Harvest of Songs. Photo by Julia Reischel.

One of the songs, "Water is Life," was written by students at PS 164 in Brooklyn and includes students talking about in multiple languages. Another, "We Are Flowers," has two versions, one in English and the other in Mandarin.

The songs come with lesson plans, lyric sheets and activities designed to allow teachers to easily incorporate them into their teaching plans.

Kids living in cities often don't know that milk comes from cows or where their water comes from, McIntosh noted, so songs like "Milking Time At The Farm" aim to educate them about the source of their food.

Some of the lessons are current and poignant: The lesson plan for the milking song asks students to chart the decline of family farms in the Catskills.

Above: An activity sheet for the "Milking Time At the Farm" song and lesson.

The Harvest of Songs project was funded with $20,000 of grants from the Catskill Watershed Corporation, the O'Connor Foundation and Farm Catskills.

Teachers in the NYC watershed can download the songs and lesson plans for free, and if they register before Nov. 17, they enter a contest for a chance to win a free Story Laurie performance at their school.