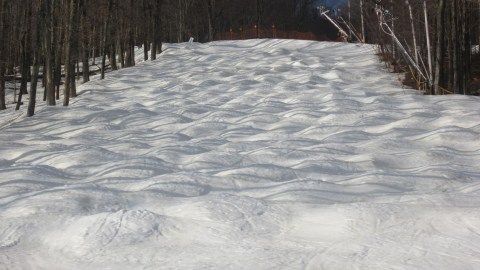 The New York State Senate has staked out a position on the Belleayre Ski Center in their budget proposal: They're willing to let ORDA have Belleayre, if the authority adds a few Catskills representatives to their board and advisory council.

The state senate passed its 2012-2013 budget resolution earlier this week. All three budget proposals -- the Senate's, the Assembly's, and Gov. Andrew Cuomo's -- are now on the table. Cuomo and state legislators will have from now until April 1 -- and possibly beyond -- to agree on one final budget, a process that is likely to involve plenty of backroom deals and public chest-beating over the next several weeks.

In statewide and Albany media, much hay is being made of the fact that neither the Senate nor the Assembly included Cuomo's "Tier 6" pension reform plan in their budget proposals, an omission that has Cuomo vowing to do battle with legislators. But in the Catskills, more attention is focused on a plan to transfer the Belleayre Ski Center, currently run by the state Department of Environmental Conservation (DEC), to the Olympic Regional Development Authority (ORDA).

Cuomo's budget, released in January, includes a line item for the transfer. Earlier this week, the Assembly passed a budget that did not include the Belleayre transfer.

The Senate's version includes the transfer, but adds several conditions. Below, an excerpt from the Senate Budget Resolution Summary Book, obtained from an aide in state senator John Bonacic's office:

•The Senate amends the Executive’s proposal to transfer the operation and the management of the Belleayre Mountain Ski Center from the Department of Environmental Conservation to the Olympic Regional Development Authority (ORDA) to better reflect regional representation on the (ORDA) board and to secure recreational opportunities at Belleayre.

•Further, minimum service standards would be established to clarify and expand upon recreational opportunities available to visitors.

•ORDA’s existing Community Advisory Council would be expanded from 15 to 21 to ensure that Catskill’s area residents are represented.