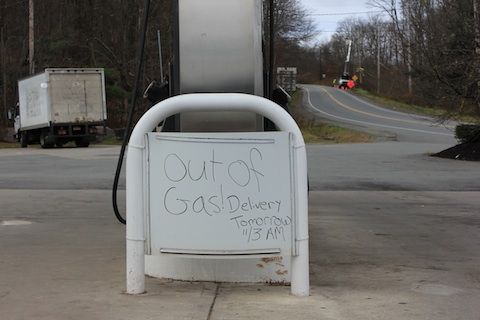 Above: A gas station without gas in Fallsburg on Friday, November 2. Photo by Jason Dole.

Thousands of households are still without power today as a Nor'easter bearing six inches of snow heads for the Catskills on Wednesday.

The vast majority of those without electricity or gas are in Sullivan County. There are only scattered gas shortages and power outages elsewhere in the Catskills. 199 households in Delaware and 112 households in Ulster county were still in the dark this morning, according to Delaware County Emergency Services and the Central Hudson and NYSEG outage maps. Greene County officials reported temporary and "scattered" gas shortages over the weekend, and several Watershed Post readers reported that Ulster County gas stations ran low on gas over the weekend. Refills arrived quickly in both counties.

But in Sullivan County, the situation is still dire.

Despite hopes that the majority of Sullivan County residents would get their power turned back on at midnight last night, 5,862 Sullivan County households are still without power this morning, a week after Hurricane Sandy hit the Catskills, according to outage maps from NYSEG and Orange & Rockland Utilities.

And plans for an emergency gas delivery from the Federal Emergency Management Agency for county officials and emergency responders today has been delayed, according to a county press release.

Sullivan County officials at the Emergency Operations Center are also planning for possible impacts of a potential Winter Storm that is presently on-track to affect our area Tuesday night through Thursday. Town officials have been contacted to coordinate preparation of warming centers and shelters that may be needed as a result of the incoming storm. However, the storm could change course over the next few days.

On Saturday, New York State assemblywoman Aileen Gunther and Sullivan County Legislature Chairman Scott B. Samuelson criticized the response of Sullivan County's utilities in an open letter. (Read the full press release about the letter at the bottom of this post.)

“The Utilities had time to prepare for this storm, but their response indicates that they did not," Gunther wrote in the letter. "There’s a responsibility to the public that needs to be met, and this round-table discussion is about making sure that it is.”

“The workers that have responded to assist our residents are working hard, and we thank them. However, there needs to be a more focused and results oriented response, along with accountability from the Corporate leaders of these companies,” Samuelson wrote in the letter.

Alex Marra, the amateur meteorologist behind the Facebook Page Hudson Valley Weather, predicted on Sunday that the Catskills could  receive up to a foot of snow this week:

For starters it should be noted that for any are in the HV above 1000 feet, like most of our towns in the Catskills are. You should be preparing for a significant early season snowstorm. In looking at the latest data it will not be out of the realm of possibilities for some areas in the Catskill to receive over a foot of snow from this system, this will likely be limited to the highest elevations.

The National Weather Service in Binghamton posted a similar warning on its Facebook page today:

[L]ook for a mix of rain and snow to begin entering eastern portions of the forecast area Wednesday afternoon before changing over to all snow Wednesday night. Snowfall totals may range as high as 6+ inches across portions of the Poconos and Catskills[.]

Read the latest shelter and dry ice updates from Sullivan County below:

Public works and utilities crews are working together and diligently to get power restored. Power outages continue to be expected to be prolonged and last for several days. Regular updates will be provided throughout the weekend.”

Read the press releases from Sullivan County in full below:

“This is not a witch-hunt,” said Assemblywoman Gunther. “This is about making sure that the communication between the utility companies, the public, and government officials during Hurricane Sandy is greatly improved for any future natural disaster.” said Gunther. “The Utilities had time to prepare for this storm, but their response indicates that they did not. There’s a responsibility to the public that needs to be met, and this round-table discussion is about making sure that it is.”

“There were positive actions that the County requested from the power companies, which were fulfilled after an original weak response,” said Samuelson. There is a need for a representative of each utility to be present at our Emergency Operations Center during an event to pair public works crews with utility vehicles,” added Samuelson.

“The workers that have responded to assist our residents are working hard, and we thank them. However, there needs to be a more focused and results oriented response, along with accountability from the Corporate leaders of these companies,” concluded Samuelson.

FEMA Gasoline Being Made Available for Emergency Responders

(Emergency Operations Center, Bethel, NY - 5:30 PM) – Sullivan County Manager David Fanslau issued the following statement: “The federal government has made an arrangement with Sullivan County to provide unleaded fuel for emergency responders personal and official vehicles (fire, EMS, and Police) at no cost for the fuel . Our first shipment will be for 8,000 gallons and it will be made available at two Sullivan County Department of Public Works locations,” said Fanslau.

“FEMA has recognized that it is imperative for County and local government to have the ability to respond to an emergency, and the backbone of that response are our fire and EMS volunteers, along with police and public works personnel,” said Scott B. Samuelson, Chairman of the Sullivan County Legislature.

This unleaded fuel will be available at no cost, and limited to one vehicle per responder, and driver will be able to receive a full tank. No portable tanks will be filled. Each driver must show a Sullivan County Accountability card or police ID card, or a County Government identification for public works and 911 departments.

“We may be receiving more fuel in the next few days, and will announce the plans for receiving that shipment when it is known, “concluded Fanslau.

(Emergency Operations Center, Bethel, NY 10:00am) - Sullivan County Manager David Fanslau issued the following statement: “The Federal Emergency Management Agency’s delivery of gasoline has been delayed, and the fueling program has been suspended until the FEMA fuel arrives. The New York State Division of Homeland Security and Emergency Services had arranged for Sullivan County to receive 8,000 gallons of gas from Ft. Dix late Sunday afternoon. The NYSHSES Fuel Task Force stated this morning that while the feds (DLA) had indicated fuel "was enroute" to Ft. Dix, the shipment has been delayed. The Fuel Task Force is working the issue to get the fuel to Sullivan County. Sullivan County has made plans to accommodate the fuel for dispensing to the emergency services personnel. Once the fuel arrives, an announcement will be made to the emergency services personnel.

The County is also preparing for an expected Nor’easter that may impact the area on Wednesday and Thursday. The fuel supply for responding to that event will need to be sufficient,” said Fanslau.

(Emergency Operations Center, Bethel, NY - 2:30 PM) – Sullivan County Manager David Fanslau issued the following statement: “The Commissioners of the Sullivan County Board Office Elections has all 63 election districts and all 39 poll sites set for the General Election on Tuesday November 6, 2012. There were two (2) poll site changes necessary to accomplish this. The poll site at Forestburgh Town Hall was moved to the Forestburgh Firehouse, and the poll site has been moved from the Willowemoc Baptist church to the Neversink Firehouse. Both of these changes were due to the lack of power at the original sites, caused by Hurricane Sandy.”