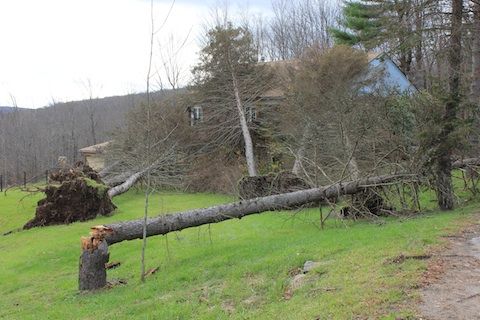 Above: Six trees landed on this house in Woodridge. A seventh was somehow able to resist the building's attractive powers. Photos by Jason Dole.

Jason Dole has been covering the aftermath of Hurricane Sandy in Sullivan County for the Watershed Post. Here's his more personal take on what it's been like to be a Sullivan County resident this week. -- Julia Reischel

On Wednesday afternoon, I asked a friend how he was doing in the wake of Hurricane Sandy. We joked that Sullivan County was on the verge of becoming a cold, wet version of Mad Max (see left for an idea of the genre). We riffed on hoarding gas and building a Thunderdome.

By the following afternoon, the joke was becoming real. We heard the urban areas to the south were running out of gas. The shortage was heading north. So were marauding hordes of fuel-hungry New Jerseyites.

So, on Friday, November 2, I put on my best post-apocalyptic outfit (rubber, scrap-metal, and rags) and headed to the eastern part of the county for a little Road Warrior action myself. Here's a moment-to-moment account of what I found in the Towns of Fallsburg and Thompson.

It's the end of the week dominated by Sandy. First stop: the Red Cross Disaster Relief shelter set up in the field house (read: gymnasium) of Sullivan County Community College. A giant curtain cuts the gym in half. On one side, lunch is being served in an emergency shelter. On the other side, a few SCCC Generals practice basketball.

I look down at the shelter. On the end of a line of empty cots, two cots are pushed together. I can't tell if two people are huddled under the blankets, completely out of view, or if a couple just covered their belongings. A walker and large oxygen tanks sit near by. All I imagine are some tired, frail seniors hiding under the covers, trying to escape the strangers, fluorescent lighting, and the rhythmic thud of dribbling basketballs.

I go down and talk to some folks about their experience in the storm. Then a massive, prolonged buzzing sound cuts through the conversation. It's as though Zeus himself, reluctant to waste a good lightning bolt, is smiting me with the sound effect for a incorrect answer. I yell, duck down, and plug my ears. How could I could be wrong enough to get a buzzer like that? What did I do?

“That's the scoreboard,” explains a man on my left. “That's how you react the first time you hear it.”

I see. People are cold, hungry, and without power, but the Buzzer of Doom has plenty of juice. Basketball stops for no disaster.

“It's nice to let kids be kids and get them out of their parents' hair,” says Kayla Greco. At the end of a full week without school, the Monticello High School junior is very laid-back, dressed in a mix of athletic wear and ninja turtle pj's. She's talking to me next door to the shelter, in SCCC's student center. It's now a play site for the youngest of Sullivan County's Sandy refugees, and Kayla Greco has been looking after them.

Above: Arielle Capone and Kayla Greco said they were “volun-told” to babysit kids at SCCC.

Greco says that the impromtu daycare started for the kids of college faculty and staff who came to work with their parents when schools closed. As more people arrived at the emergency shelter, more kids joined the rec room.

Greco and her friend, fellow Monticello junior Arielle Capone, had been planning to go trick-or-treating, but Sandy changed all that. When Sullivan County canceled Halloween, they were strongly encouraged by their parents to help out at the shelter. Or, as they put it, “volun-told.” As in, “we were volun-told to do it.”

As in Mad Max Beyond Thunderdome, the children are banding together and using hip, new slang. Watch out, post-Sandy Sullivan County: You can't fool the children of the revolution.

Left: Workers from the E&E Powerline company use two bucket trucks at a time to restore power outside of the Siddha Yoga Ashram in Fallsburg on Friday.

I leave the college and hit the road, tracking down a lead in Woodridge. This is when the real Mad-Max vibe hits.

Oh, sure, there are plenty of signs of life. Linemen are out working. As I cross Route 42 and head into Woodridge, most of the electric poles lining the road are newly planted and waiting to be restrung. But they are outnumbered by snapped and uprooted trees. One property has six trees that all fell towards the house, and a seventh straggler that just couldn't hit its mark.

I soon realize I need gas and head back to the Stewart's on 42. I pull up, ready to refuel, but no dice. No gas, either, though a handwritten sign promises a

fresh delivery tomorrow. Rather than wait, I go to South Fallsburg. A gas station on the left has plastic bags on all the nozzles. Worry rises. Another gas station on the right is completely closed. Now I'm rattled. How far do I have to go? How far will the fumes take me?

There are three gas stations as you enter Monticello from Kiamesha. I reach the first and see the pumps have been ripped right out of the pavement. Okay, that's probably not related to Hurricane

Sandy, but it's not a good sign, either. The second gas station does have a good sign – a typed “no gas” sign, the best one I've seen yet.

The third station, a Valero, is open but on the other side of 42. I head up the hill and catch a break at a fourth gas station. There are no lines here, but seven out of eight pumps are in use. Guess I'm crazy number eight. I fill up and head back.

This time I notice the Valero has two lines of cars spilling into the road, and now a Sullivan County Sheriff's vehicle is on the scene, lights a-flashing. The Sheriff's deputy walks over to some people by the door. Is there conflict on the gas lines? A drive-off? The gas shortage is real, lawlessness is creeping in, and I don't have to be volun-told twice to get out of there.

While I'm in Monticello, I should check out the emergency shelter at the Ted Stroebele Center (above). Besides the college, it's the only other shelter in official press releases.

On entering, I see a room full of empty cots and shrink-wrapped blankets, but no one is there to specifically welcome me to the shelter. I feel bad for whoever might arrive with a genuine need for succor. On the other hand, if I really were a cold and tired refugee, I'd probably just claim a cot and bust out the blankets. No need for an invitation.

I return to Woodridge determined to get the story I set out for hours ago. I go to Eagle Ridge, low-income senior housing run by the Woodridge Housing

Authority. I'd heard the power was out, but as I knock on a door, I hear music and smell cooking.

t's the apartment of Samuel Resto (above), a helpful man and quite the cook. He says the power has been back less than half an hour. I guess he wasted no time getting back to cooking, and when I say so he laughs. He shows me a makeshift hibachi (left) and says, “I was also cooking outside!”

I thank Resto for his help and let him get back to his cuisine, which he will share with others at Eagle Ridge. He's one of the many folks I've met who prove there's plenty of humanity left in the chaos that is post-Sandy Sullivan County. People may be guarded and growling at the gas pumps, but they're friendly everywhere else. Next time, I'll leave the scrap-metal-and-rags outfit at home.