Fleischmanns to New York State: We need $1 million for flood repair, and we need it now 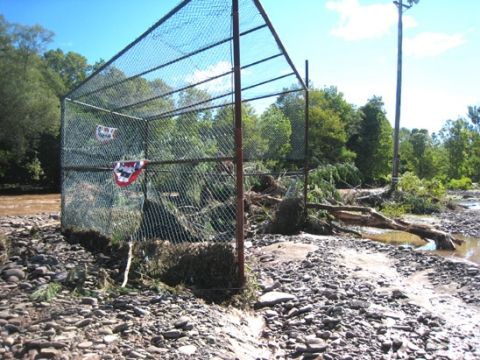 Above: A photo taken by a Watershed Post reader in Fleischmanns Park on August 31, 2011, after the Irene floods. Six months later, Fleischmanns still must undertake millions of dollars' worth of rebuilding work, which has been stalled while the village searches for up-front funding.

When the final accounting for the Irene and Lee floods is done, the Federal Emergency Management Agency is likely to be writing some very large checks to upstate New York towns and villages. But even where FEMA reimbursement is likely, towns and villages across the Catskills are delaying much-needed projects, simply because there is no money to get them started.

A trustee of Fleischmanns, a tiny village in Delaware County with a population of about 350 people, is calling on state officials to front a $1 million interest-free loan to the village, to cover the up-front costs of flood repair and rebuilding work that FEMA has been slow to process paperwork for.

In a letter addressed to Assemblyman Clifford Crouch, Fleischmanns deputy mayor Todd Pascarella writes that the village sustained about $4 million in municipal damage from flooding during Tropical Storm Irene.

Until FEMA can process its enormous backlog of paperwork and issue assurances to the village that the money will be repaid, Pascarella writes, the village is unable to get a municipal bond to fund the projects.

To make matters worse, Pascarella writes, Gov. Andrew Cuomo declined to apply for a federal loan program that could have taken some of the pressure off towns and villages.

Village trustee Ben Fenton says that without documentation from FEMA, or a large loan from the state, the village's hands are tied.

"We've got all these projects that need to be done. FEMA is taking its sweet time," he said. "What's plan B? No one can tell me what plan B is. Everybody's very sympathetic, but nobody can tell me how I can start the funding for these projects."

The issue of flood work funding is becoming extremely pressing for villages as budget season approaches. Villages must have their tentative budgets for the upcoming year filed by March 20, and the final budget must be adopted by May 1.

Pascarella's letter is embedded below.