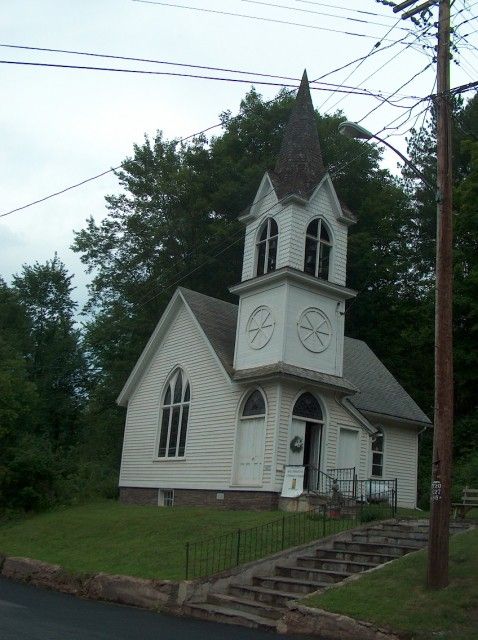 Above: The Holy Innocents Church in Halcottsville. Photo courtesy of Bishop Francisco Betancourt.

A public outcry has erupted in a tight-knit Catskills community over a local interfaith council's reluctance to allow an independent Catholic church to join as a member. The dispute has prompted the council's pro bono lawyer to resign in protest, and stirred up local tensions about same-sex marriage and religion.

Bishop Francisco Betancourt, a founding pastor of the independent Catholic Holy Innocents church in Halcottsville, said that his church has been trying to join the Margaretville Interfaith Council for 12 years, ever since the church was established. Throughout that time, Betancourt said, his efforts have been met with a resounding silence -- a response that was never quite clear enough to be 'no,' but never a welcoming 'yes.'

The reason his church has not been welcomed, Betancourt says, is Holy Innocents' willingness to perform same-sex marriage, an issue that Interfaith Council leaders acknowledge is deeply controversial among their members.

At a board meeting last week, the Interfaith Council declined to take a vote on whether to allow Holy Innocents to join the group, which includes several local Methodist churches, a Presbyterian church, the Roman Catholic Sacred Heart parish, the Jay Gould Memorial Reformed Church, the evangelical Catskill Mountain Christian Center, and the B'nai Israel synagogue in Fleischmanns.

"Nothing happened. They were not rejected," said Adele Siegel, president of the Council and first vice president of B'nai Israel. Siegel said she fully expects Holy Innocents to be voted into the Council without incident.

Council leaders insist that the group's intent was only to table the vote to a future meeting, not to put it off indefinitely. But when Council member Reverend Richard Dykstra told Betancourt after last week's meeting that Holy Innocents had still not been accepted as members, Betancourt finally decided to take the issue to the pulpit.

In his sermon, Betancourt compared the Holy Innocents congregation to a widow in one of Jesus's parables, who gives two small coins to the temple while rich people give large sums.

"That's what our church is. We give little, but we give all we have," he said. "The Interfaith Council rejected us as the Philistines rejected this woman."

Betancourt's Sunday homily sparked a flurry of outraged comments on local Facebook pages, an angry post about the issue on Diversity Rules Magazine's blog, and a deluge of phone calls and emails to the Interfaith Council from Holy Innocents parishoners and supporters.

Upon hearing about the controversy, the Interfaith Council's pro bono lawyer, Margaretville attorney Carey Wagner, resigned in protest. Wagner had been helping the Council with the process of formally incorporating as a nonprofit.

Wagner, who is not a member of any local congregation, said that he would reconsider his decision if Holy Innocents is admitted to the Interfaith Council.

"I wrote [to the Council] saying, 'If you're supposed to be about interfaith, I don't get how any particular doctrine could be so suspect.' If you have Jews and Christians, that's a pretty basic doctrinal difference," he said. "Believing that Jesus is the Messiah -- is that less important than same-sex marriage? It's completely out of proportion."

Siegel said that the vote on whether to accept Holy Innocents was tabled because it came up at the end of a long business meeting.

"I don't want us to get a reputation as bigots, because it's not who we are or where we are now," Siegel said. "When we have our meeting next week, I don't want anyone to think a decision was reached because of pressure. This is where we were going anyway.""

But Dykstra, who is the Council's secretary-treasurer and pastor of the Jay Gould Memorial Reformed Church in Roxbury, acknowledged that some of the Interfaith Council's members may have difficulty working with -- and praying with -- the Holy Innocents clergy.

"We realized it was going to be a bigger issue than just a quick vote," he said. "A couple [of Council members] implied that they needed just a little bit more time to talk."

Dykstra would not identify members of the Council who were uncomfortable with Holy Innocents joining the group, but he said that there are concerns about the denomination's theological position on same-sex marriage and its status as an independent Catholic church.

"I'm not sure it's an objection. It's a concern," he said. "Some of us denominationally have policies we have to live by. Being part of a group that accepts certain practices -- is that going to get us in trouble? There was a concern that that needed to be looked into a little more."

Holy Innocents is one of hundreds of independent Catholic churches around the world that trace their lineage of ordained priests in a direct line of succession back to the Roman Catholic hierarchy, but have severed their relationship with the Vatican. Some are more conservative than the Vatican itself; others are theologically liberal.

Holy Innocents is a member of the Catholic Apostolic Church In North America (CACINA), an offshoot of a Brazilian church founded in the 1940s by an excommunicated Roman Catholic bishop. Unlike the Roman Catholic church, CACINA practices the ordination of women and married people, admits same-sex couples to the sacrament of marriage, and allows divorced parishoners to remarry and receive the Eucharist.

Betancourt said that has been told by his parishoners that local Catholics have challenged the legitimacy of Holy Innocents as a church, and that he has confronted the priest of Margaretville's Roman Catholic Sacred Heart parish, Father Paul Catena, about the issue.

Catena could not be reached for comment. Sacred Heart's representative to the Interfaith Council, Dick Tucker, declined to speak with the Watershed Post.

When it comes to Holy Innocents' position on same-sex marriage, it is hard to distinguish the personal from the theological. Betancourt is legally married to his Holy Innocents co-pastor Dante Tarantini, with whom he has been in a relationship for 35 years. Over the years, the couple has adopted six HIV-positive infants, four of whom died of the disease at young ages. Two sons, who had received false positive diagnoses as infants because they still carried maternal antibodies, are now healthy young adults.

Another Holy Innocents pastor, Linda Wilson, is a former Episcopalian priest who left the Episcopal church upon moving to the area because of the Albany diocese's conservative stance on same-sex relationships and the ordination of women. Linda and her husband H.L. Wilson run the Bibliobarn bookstores in Margaretville and South Kortright.

Betancourt said that he is tired of his church being called "the gay church," and of having Interfaith Council members who say they are willing to work with Holy Innocents refuse to make a strong case for their membership on the Council.

"You know there are gay people in every one of these churches. To have somebody label us the gay church -- is there the gay Freshtown? The gay McDonalds? It's just some way for somebody to call you a name they think will offend you," he said. "It was mainly the straight members of our church who are the ones that are writing these emails demanding that we get admitted."

The swiftness and vehemence of the local reaction in support of Holy Innocents has surprised clergy on both sides of the dispute. Betancourt said he had no idea his sermon from the pulpit would elicit such an outcry.

"We did not call for any rebellions or rallies, but people in our church are more proficient on Facebook that I could have imagined," he said. "I have not seen any of these Facebook things because I don't have a way to get to it."

Dykstra hasn't seen the social-media furor either, though he's been getting many emails from Holy Innocents parishoners and supporters.

"I don't Facebook, so I haven't seen what's being said there," he said.

Regardless of what happens at the Council's next meeting, Betancourt said, Holy Innocents is going to help the Interfaith Council's food pantry get ready for Thanksgiving.

"We've brought some food over there, we intend to help them this week distributing turkeys, and we are purchasing some additional food products to round out the baskets they are giving to families," he said.

Another Interfaith Council member, Margaretville United Methodist minister Larry Dunlap, has invited Betancourt to give the call to worship prayer at the church's Thanksgiving service this Sunday, which Betancourt gladly accepted.

Siegel hopes that after the furor dies down, some good will come out of the process. The Irene floods have made the Council and its charitable work increasingly vital to the community, and Siegel said that the group's work is too important to sacrifice to this dispute.

"My feeling is that this group should be held together by two things: A common belief in God as a religious community, and a desire to serve the community through the food pantry. That's our mission," she said. "We have a lot of differences. I think it's important to bring everybody in."

Betancourt, too, is ready to put the long campaign for inclusion behind him, and hopes the local religious community can work together peacefully.

"It's been a very long time, to be scrutinized like this," Betancourt said. "All we want is a place at the table."