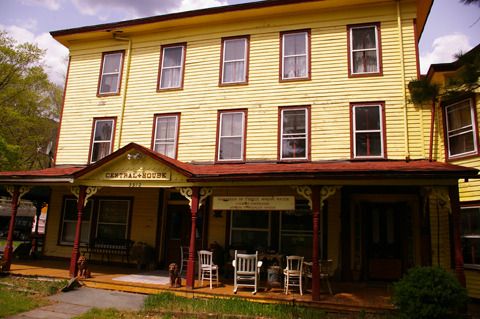 The Maetreum of Cybele, a former inn in Palenville that is now the spiritual home of a Cybeline Pagan group. Photo by Julia Reischel.

A group of Pagan adherents in Palenville won a major victory in a New York State appellate court last week, when a judge ruled that the town of Catskill was incorrect in denying the group a property tax exemption.

Under U.S. law, a religion's a religion, no matter how small. And as religions go, the Cybeline Revival is one of the tiniest. It's a monastic branch of Paganism founded in the late 1990s by local priestess Cathryn Platine, the Reverend Mother Battakes of the Maetreum of Cybele. The Maetreum -- a three-story former inn in the little Catskill hamlet of Palenville -- serves as the spiritual home of the Cybeline Revivals's handful of followers. Several followers of the religion live at the Maetreum, including Platine.

Since 2007, the Maetreum has been fighting an uphill battle against the town of Catskill, whose tax assessor has repeatedly denied the group a property tax exemption. Under federal law, properties owned by recognized religious organizations are exempt from local taxes, as long as they are used to further religious or charitable purposes. Town officials have claimed that the Maetreum does not carry out charitable work, and has used the property only as housing for their members.

In interviews with the Watershed Post, Platine said that the town has singled the Maetreum out for special persecution as a minority religion, and sought to use the group's welcoming stance toward transgendered women against them in court.

"We have arguably done more charitable work than the three Christian churches in Palenville combined," she said. "There's been an ongoing problem in the Catskill area for decades, with municipalities targeting minority religions and Jewish synagogues...Hopefully this [decision] will send another message that minority religions need to be treated the same way as other groups are."

The recent decision is a major shift for the Maetreum. In 2012, the group lost a lawsuit against the town of Catskill in New York State Supreme Court, in a case presided over by judge Richard Platkin. In that decision, Platkin wrote that the Maetreum "failed to meet its burden of demonstrating that the principal uses of the property during the relevant tax years were in furtherance of the Maetreum's religious mission."

The Maetreum appealed, and on Nov. 21, a four-judge panel of the Appellate Division, Third Judicial Department unanimously ruled to overturn the lower court's decision (embedded in full below). In the decision, judge William McCarthy wrote that the Pagans made their case that the property was being used for charitable and religious purposes:

The testimony established that the Cybeline Revival stresses communal living among its adherents, as well as providing hospitality and charity to those in need, and the members consider this property the home of their faith...They also conduct religious and charitable activities throughout the property on a regular basis.

Platine estimates that the group's seven-year battle with the town has cost the Maetreum roughly $50,000 in legal fees alone. The recent decision has awarded legal costs to the group.

In their long fight with the town, the Maetreum has had some financial help from others in the worldwide Pagan community, many of whom saw the case as an important test of respect for Pagan beliefs. News of the Maetreum's win has spread quickly through Pagan online news outlets. The Wild Hunt's Jason Pitzl-Waters wrote in a recent article that the decision was a major victory for all small religious groups:

This property tax win, as Rev. Platine intimates, is not only a win for the Maetreum, but for all religious minorities, especially Pagan organizations making their first forays into building a lasting infrastructure of buildings and services.

In light of the recent decision, Platine said she was looking forward to spending more time and energy on long-term projects in the community.

"One of my dreams that I wanted to do all these years and couldn't pull off, because of spending all our money on attorneys, is to start a food pantry," she said.

The Maetreum has also been working on local disaster preparation, Platine said. The group recently applied to the FCC for a license to a low-powered FM radio signal that would reach throughout Catskill and most of Saugerties, which Platine hopes to develop into a small community radio station powered by renewable energy.

"If we have another hurricane or something going through here and the power's out, and we have green power and a radio station, we could be quite valuable to the area," Platine said.

The case could still move forward, if the town decides to press on. Town attorney Daniel Vincelette told the New York Law Journal that the town was mulling an appeal to a higher court:

He said town officials were "disappointed" with the ruling and that he was studying whether to recommend that it be appealed to the state Court of Appeals.