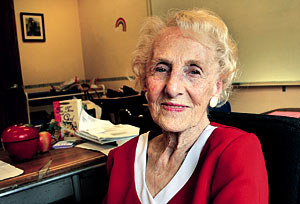 Dora Fowler has clearly had an enduring impact on the youth of the Roxbury Central School District, as well as on the community-at large, and accordingly merits recognition and applause for over 60 years of impressive dedication to others

She also had a lot of fun, according to a February profile in the Mountain Eagle, which described how Fowler engaged in some pretty exciting extracurricular activities in recent years:

Fowler was also active in the school plays and she made one particularly “wild” appearance in 1998.A professional acting group came to the school to do a production of "Peter Pan," and when Fowler saw the apparatus to make Peter fly, she said she wanted to try it.

“She was suspended 15 feet in the air above the stage as Peter Pan,” [Fowler's daugther, Cynthia] Durham laughed.

Fowler’s reputation as a thrill seeker didn’t stop there.

For her 80th birthday, she took a hot air balloon ride in Maine and for her 90th, she went on a hand glider.

In a 2007 article in New York Teacher, the state teacher's union magazine, Fowler told other teachers a few tricks for educational longevity: