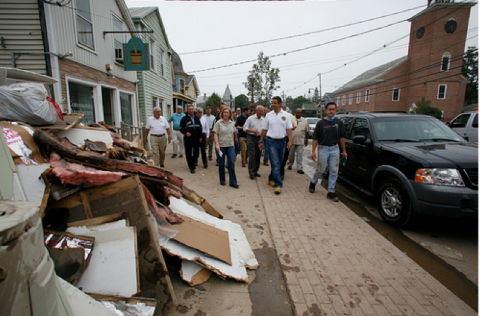 Above: Cuomo tours flooded-out Middleburgh on September 3, 2011. Via the GovernorAdnrewCuomo Flickr page.

Governor Andrew Cuomo, who announced a new package of relief funds earmarked for flooded-out communities two weeks ago, will be talking about flooding at an appearance on Windham Mountain today at 2pm. If you want to take your complaints to the top, there will be a press conference afterwards. The event is being held at the Windham Ski Resort.

On November 16, Cuomo announced a package of relief resources that included $3 million for "rebuilding Main Street businesses," $5 million for homeowner furnace repair (apply at your local Weatherization Assistance provider), loans to municipalities, and a new influx of FEMA temporary housing units. For details on the latest relief package, see the press release below.

Cuomo's office also announced last week that 97 percent of roads and bridges that were damaged by Tropical Storms Irene and Lee are open.

"This summer, our state suffered from two natural disasters that devastated communities across New York," Governor Cuomo said. "I recently deployed the Upstate Storm Recovery Task Force to assess the most pressing concerns on the ground and report back so we can coordinate on providing additional resources where they are most needed."

Governor Cuomo announced today that up to $3 million will be made available to Main Street businesses in some of the hardest hit areas with money from the New York State Agricultural and Community Recovery Fund, a $15 million fund set up in September to help rebuild from the storms.

This new round of funding will be requested by counties on behalf of businesses to help revitalize their local economies. Eligible businesses will be able to apply for assistance to, among other things; rehabilitate buildings for commercial and main street residential use, repair and replace permanent fixtures and equipment, as well as for inventory and working capital. The funding will be administered by NYS Homes and Community Renewal (HCR) in collaboration with county economic development offices.

The need for these additional funds was identified by the continued work of the Governor's Upstate Storm Recovery Task Force, Lieutenant Governor Duffy, Commissioner/CEO Darryl Towns, and the staffs of HCR and the Governor's office, who have continued to visit affected communities and meet with business and community leaders to assess the need to rejuvenate these economic centers.

For more information on the Main Street portion of the Agricultural and Community Recovery Fund, please contact the office at Homes and Community Renewal (HCR) at 518-474-2057.

$5 Million for Repairing and Replacing Furnaces

Governor Cuomo also announced that $5 million in funding is being made available to help repair and replace furnaces damaged as a result of Hurricane Irene and Tropical Storm Lee.

The funding is made available through a collaboration between New York State Homes and Community Renewal (HCR) and the State Office of Temporary and Disability Assistance (OTDA). Up to $6,000 per applicant is available to households that qualify. Work will include repair or replacement of the furnace, boiler or hot-water heater as well as repair or replacement of duct work, fuel tanks, venting systems, or other items essential to the safe operation of the heating system. Assistance is limited to single-family homes and duplexes.

Furnace repair and replacement in affected counties will be operated through the Weatherization Assistance Program (WAP) overseen by HCR. Through this program, HCR contracts with experienced local providers to do work. Assistance will be provided on a first-come, first-served basis to those whose homeowner's insurance does not cover the damage, or have applied for assistance through the Federal Emergency Management Agency and have been either rejected or received an inadequate payment.

Households cannot have liquid resources exceeding $5,000 and must meet certain income eligibility guidelines, which can be found at http://nysdhcr.gov/Programs/WeatherizationAssistance/.

To apply, homeowners should directly contact the Weatherization Assistance provider that serves their area. A list of providers can be found at: http://nysdhcr.gov/Apps/profiles/profile_WAPcnty.asp

For more information about furnace repairs or replacement call 1-866-ASK-DHCR.

The Governor has announced that funds are still available for municipalities that suffered damage to their water systems during Hurricane Irene and Tropical Storm Lee. The funds are available through the Environmental Facility Corporation's Hurricane Emergency Loan Program (HELP). So far, 14 municipalities will receive a total of $12,922,000 in five-year, no-interest loans. The fund contains $25 million.

Expenses for repairs to pump stations, electrical equipment, treatment facilities and other critical equipment, temporary emergency services such as vacuum truck hauling, bypass pumping and disinfection and related engineering and other professional services are examples that may be eligible for EFC financial assistance.

HELP loans can be repaid with FEMA funds or converted by EFC into a long-term loan.

Applications may be submitted through December 31, 2011.

For more information on the HELP loans, contact the Environmental Facilities Corporation at 1-800- 882-9721.

Completion of Repairs to Roads and Bridges

Governor Cuomo additionally announced that 97 percent of the roads and bridges that were damaged or destroyed by Hurricane Irene and Tropical Storm Lee are now repaired and opened.

As a result of the storms, more than 400 road segments and bridges were closed on the state highway system. Within ten days of Hurricane Irene, the state had re-opened 170 of the nearly 200 closed due to the storm. Within ten days of Tropical Storm Lee, New York reopened an additional 200, and continued work on the infrastructure that suffered the most extensive damage. As of today, three highways and three bridges remain closed; three of those highway segments are scheduled to open by the end of this week.

The remaining closures are as follows:

FEMA requires that 200 AMP utility service be available for these THUs. State OEM has been working with State Public Service commission to ensure that Utility companies are responsive to FEMA's needs to get service upgraded where it is needed.

State OEM, State DEC and The Department of State's Codes Division have been working with FEMA to ensure that any codes related issues, such as placement of THUs in floodplains, can be addressed promptly and safely.

State OEM and State DOT has worked to expedite the permits for companies hauling the THUs on State roads and to grant blanket waivers to enable companies to work without having to request permits repeatedly. State DOT also waived permit fees. State OEM also alerted County Emergency Managers to the fact that THUs would be going over local roads and asked them to notify local law enforcement.