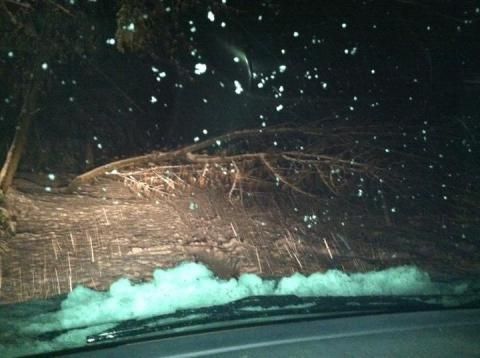 Above: Snow and a downed tree blocking a road in Dutchess County last night. Photo by Steve Hopkins, via Facebook.

Well, that was something. Five to 10 inches of snow wet, heavy snow are blanketing the Catskills this morning after an overnight blizzard.

At 7:40pm, Governor Andrew Cuomo announced that 261,338 customers had lost power statewide because of downed trees and power lines caused by the storm. At 9:30pm, the governor declared a state of emergency for 13 counties across the state, including Sullivan, Greene, Ulster and Delaware counties. (See both press releases below.)

The county that seems to have been hit hardest is Ulster. Central Hudson reported last night that about half of its customers were without power, according to a statement published by the Daily Freeman.

“In addition to the heavy snow on the limbs, we have a lot of trees that still have root systems compromised by the two tropical storms. My best advice is for people to contact us as soon as their power goes out.”

Tesoro’s predictions about trees coming down came true starting at around 4:30 p.m. Saturday as emergency calls for trees down at the Ulster 911 center included Hurley, Rosendale, St. Remy, Lomontville, Vly-Atwood, Accord and Stone Ridge.

Power lines were down near Glasco, Ruby and in Lake Katrine on Neighborhood Road and lines also came down on a home in Napanoch.

A tree landed on a house and car behind Cumberland Farms in Port Ewen Saturday afternoon.

The Times Herald-Record reports that many of the customers without power will have to wait a few days:

The utility companies said it will take several days to restore service. Central Hudson had more than 1,000 separate outage cases Saturday and expected to receive 100 contractors from Tennessee Sunday ... Ulster County received more than 125 reports of downed wires Saturday, according to Art Snyder, the county's emergency management director. Wires or trees caught on fire everywhere from Salisbury Mills and New Windsor to the Town of Ulster.

The roads locally were treacherous. There were multiple reports of cars off the road; a tractor trailer was said to be stuck on Ira Vail Road in Cairo Saturday afternoon. There was at least one car accident reported on the Thruway near Exit 21.

In Cairo, a conflict between the town and the teamsters' union erupted into a fight over whether or not the roads would be plowed, the Daily Mail reports:

A state of emergency needed to be declared in the town of Cairo Saturday to force four highway department workers, who refused to show up for storm duty, to plow the streets, according to Supervisor John Coyne.

The workers were ordered to come in by Highway Superintendent Steven Rumph, but refused, according to Coyne ...

"As of 7 p.m. (Saturday) these workers verbally stated they would not operate the plows," Coyne said in a news release.

"With serious snowfall and wind sweeping through parts of New York, the state of emergency declaration will help deploy state resources to communities that have been hit the hardest by this storm," Governor Cuomo said. "We are communicating with local governments to coordinate our response efforts and we will mobilize resources as needed to areas experiencing the most severe conditions. I urge New Yorkers to have safety as their top priority and avoid driving on icy roads or during heavy snowfall."

A state of emergency enables New York to use state resources to assist local governments more effectively and quickly, and gives the Governor the authority to suspend statutes, rules and regulations that would impede response and recovery activities. The declaration further gives the Governor the ability to direct state resources, such as Department of Transportation equipment and personnel, to local governments in need. The declaration applies to Albany, Columbia, Dutchess, Delaware, Greene, Orange, Putnam, Richmond, Rensselaer, Rockland, Sullivan, Ulster, and Westchester counties, and contiguous areas.

New Yorkers in affected regions should prepare for the possibility of extended power outages due to the combination of wet snow and leaves on trees causing branches to fall on power lines. The State Public Service Commission (PSC) is working to ensure utilities respond aggressively to get power back on as soon as possible should outages occur. PSC has worked with multiple utility companies, who have identified and made available 341 line, tree, and forestry crews and contractors.

Steps taken to ensure readiness include:

Snow and ice assets are being deployed: 825 plow trucks are ready for snow and ice control, 90 loaders in support, with 990 operators and supervisors engaged in operations.

The State Police has aircraft on standby for life-safety missions.

· NYS Route 42 at Kiamesha Lake near Monticello
· Eastbound Right Lane Blocked on Brooklyn Queens Expressway at Cadman Plaza due to flooding
· Southbound Lanes of Bronx River Parkway at Gun Hill Road due to downed tree
· Taconic State Parkway Northbound and Southbound from I-84 to Route I-84 Eastbound from Route 9 to Route 312 (exits 13-19).

· No service on the #2 line between East 180th Street and Dyre Avenue due to several trees down on tracks Y1 and Y2 between Pelham Parkway and Dyre Avenue.

· Trains operating in both directions.

· Various detours in effect due to downed trees and tree limbs, power lines.

· All facilities are currently open and operating in both directions.

· Branch lines on New Haven are out, and New Haven Trains are running hourly.
· The Upper Harlem line is out.
· There are currently 50 mile speed restrictions system-wide.