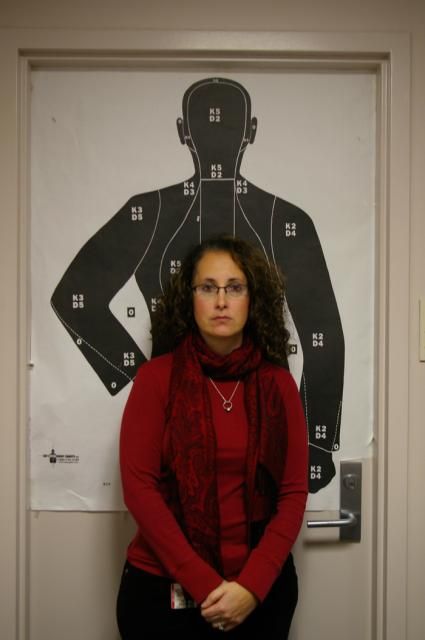 Lisa Barrows, the Delaware County DWI Coordinator, in front of her office door in Delhi. Photo by Julia Reischel.

Unlikely as it sounds, the Delaware County Stop DWI program and its sole employee, Lisa Barrows, have become the center of a political firestorm.

In six of years running the anti-drunk-driving program, Barrows has racked up an impressive track record. Educators and law enforcement have praised her outreach efforts in local schools. During her tenure, she reports, drunk driving fatalities in the county have fallen by 50 percent.

But despite her program's successes, Barrows said that county supervisor Jim Eisel told her today that her appointment as coordinator of the Stop DWI program will not be renewed when her term expires at the end of 2010. Eisel did not return multiple calls for comment, but two other sources confirmed that county officials have decided not to renew her contract.

Sources offered differing accounts of how and when the decision about Barrows was made.

The last time Barrows was up for reappointment by the county, in January of 2009, public safety committee chairman Craig DuMond stated on the record that Barrows “has turned the department into a model DWI program for other counties in New York State” and that she had done “an outstanding job.”

In an interview yesterday, when asked if he still supported Barrows's work, DuMond declined to comment on her performance.

“I think the program itself is doing OK,” he said. “It would be inappropriate for me to comment on personnel matters.”

Len Utter, the supervisor of Middletown, and also a member of the Public Safety committee, still endorses Barrows.

“She took a program that was basically defunct and, as far as I'm concerned, put it back on the map,” he said yesterday.

But support for Barrows on the county board appears to have largely evaporated since her last reappointment. In particular, Sidney supervisor Bob McCarthy, who sits on the public safety committee, took an instant dislike to her when he took the supervisor job in January.

Barrows claims that when she met McCarthy for the first time, at a county board meeting on January 5, he told her, “I'm your worst enemy.”

Barrows and McCarthy traded letters this spring, in which McCarthy criticized the Stop DWI program and Barrows defended it. (You can see both letters below.)

The correspondence reached a peak in July, when McCarthy emailed Barrows and copied all of Delaware County's supervisors to say that he “did not approve of [the] program or the way DWI laws were enforced in general.”

He then attacked the Stop DWI program for being a “waste of taxpayer money.” (In fact, the program is not funded with taxpayer money, but by fines paid by drunk drivers.)

In the email, McCarthy also called Barrows “vindictive, arrogant, and aggressive,” and stated that he believed she should not work with schoolchildren. (The entirety of that email is printed below.)

Eisel has also expressed distaste for anti-DWI efforts in the county. In a county board meeting on May 26, he argued successfully against accepting a grant from the county Alcohol and Drug Abuse Council to fund an underage drinking enforcement program. In the meeting, Eisel said that retail compliance checks to deter underage drinking amounted to “entrapment.”

There are other forces working against Barrows as well. The Delaware County Sheriff, Thomas Mills, has floated the idea of putting the Stop DWI program under his own department, where, he says, it will save the county money by eliminating Barrows's salary. (The county's 2011 budget states that the program will have a budget of $122,000, which includes a $38,000 salary for its coordinator.)

“Hypothetically, I commented to somebody that yes, it would [save money], because it would eliminate a paid position within the county,” Mills said today.

Under the sheriff's department, the Stop DWI program and its education programs in local schools would be staffed by sheriff's deputies, MIlls said. He added that he had not been officially told that his department would be managing the program, or of any decisions about Barrows.

In an interview yesterday, before she had been informed that the county had decided not to reappoint her, Barrows said the politics surrounding her – and the Stop DWI program in general – had become unbearably hostile.

“It's a nightmare,” she said. “I wish I could be in a department where I could just come to work every day and do my job.”

12/10/10 update: The Daily Star also has a story in today's paper, and cites an email sent by Eisel to Utter confirming that Barrows will not be reappointed.

Craig DuMond returned a call this morning to confirm that Barrows's contract will not be renewed next year. He said that he could not explain the situation two days ago during an interview because Barrows "had not been advised about that yet."

DuMond said that the decision about Barrows was made "mainly for budgetary reasons."

"Aobut half of the [Stop DWI] budget is eaten by wages and future benefits of the coordinator," he said. "We're looking at making the position a part-time position."

The county would not have to pay a part-time Stop DWI coordinator healthcare or retirement benefits, Dumond said. That part of the Stop DWI budget "could be pushed to [those doing the] grunt work" of DWI enforcement.

There has been no decision made yet about where or how the program will be administered, DuMond said. He added that he personally is not recommending that it go to the Sheriff's Office. "We're going to be discussing it in future public safety meetings," he said.

The decision to end Barrows's appointment at the head of the program "has been the topic of discussion" by the public safety committee over "the past couple of months," DuMond said. But officially, the public safety commitee has no say in the decision to end Barrows's contract, he said, because by statute, her position is appointed solely by the county chairman.

"There was a recommendation from the public safety committee to proceed in this direction," he said. "But the appointment is totally Jim [Eisel]'s."

Letter from Bob McCarthy to Lisa Barrows, copied to the Delaware County Board of Supervisors, July 22, 2010:

Let’s put this in chronological order:

At a Jan meeting of the Board of Supervisors you approached me and introduced yourself. I told you that I did not approve of your program or the way DWI laws were enforced in general.

At the end of April you sent me an Email extolling your new and improved “mock crash”.

In mid May I answered your Email telling you that a “mock crash” was ridiculous and reiterated my feelings about the issue in general.

Within four hours I received a threatening Email from a Terry Hannum who informed me that if I did not mend my ways that I would be reported to MADD, SADD, etc.

I received word that you had contacted area schools informing them of my “indiscretion” and seeking aid against this travesty.

I received word that you had contacted “the list” (apparently an Email list of other STOP DWI directors, etc) with the similar purpose of enlisting support for your cause.

I received a letter from the Mayor of Sidney praising your efforts, condemning my actions, doubting my constituent support, while failing to mention the fact that you had just gifted a car, purchased with 26 thousand dollars of County funds, to them.

The Sidney Democratic Party attacked me, on your behalf, in a letter to the Oneonta Star

In late June, after you had attacked me in apparently every way that you could think of, you sent me a letter, while copying every news outlet in the area, wanting to explain to me how wonderful you are and the value of your program. It was printed in the Tri Town News. I just answered that letter and copied all of the venues that you had added.

This is insubordination in its most extreme form.

In our form of government, job descriptions, oversight, and funding are generated by elected officials. Although, by design, you report to the Public Safety Committee you have apparently received very little supervision, believed that you were autonomous, and could do anything that you wanted.

I don’t know what you hoped to accomplish by your actions, if you thought you could blackmail me into changing my vote that certainly didn’t work. If you thought your actions would cow other Supervisors into not opposing you, I hope that doesn’t work either.

When this first started I just believed that your job description was ill conceived and that your program was a waste of taxpayer money. I still believe that, but in addition I now believe that your manner is too vindictive, arrogant, and aggressive for you to represent the County, especially in any program involving school children.