Above: A track car used by Catskill Mountain Railroad volunteers to inspect the railway lines. Photo by Ryan Lennox.

The Catskill Mountain Railroad (CMRR) has settled its lawsuit against Ulster County, another sign that the railroad’s management is dropping its adversarial stance against the county in order to increase its chances of winning a contract for a new lease to operate a tourist railway from Kingston to the Catskills. The CMRR’s current lease expires on May 31.

As part of the settlement, according to a press release issued by Ulster County, the CMRR agrees to stop operating on the tracks by May 31. Read the full settlement agreement below or by clicking here.

In December, Ulster county legislators tried to end a three-year feud between Ulster County Executive Mike Hein and the railroad when they voted to endorse a “segmented rail with trail plan” along the 36.8-mile former Ulster & Delaware rail corridor, where trail advocates hoped to install a new recreational trail. 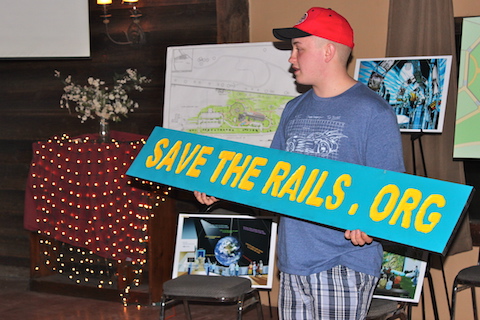 Above: Hunter Downie, an 18-year-old who ran for the Ulster County Executive seat on the Green Party ticket in 2015, presents a savetherails.org sign to a group of railroad supporters at a meeting at the Boiceville Inn on Saturday, March 12. Photo by Rebecca Andre.

The deal, which was worked out with the help of both CMRR officials and trail advocates, will effectively prevent a railroad from running an unbroken train all the way to Highmount, which has long been a dream of the county’s most ardent railroad fans.

But Hunt may no longer have the ears of all railroad supporters. Some demonstrated against the segmented rail-with-trail plan at the Ulster County Office Building on Tuesday, April 19, the same day that the county announced the end of litigation with the railroad, according to the Daily Freeman. 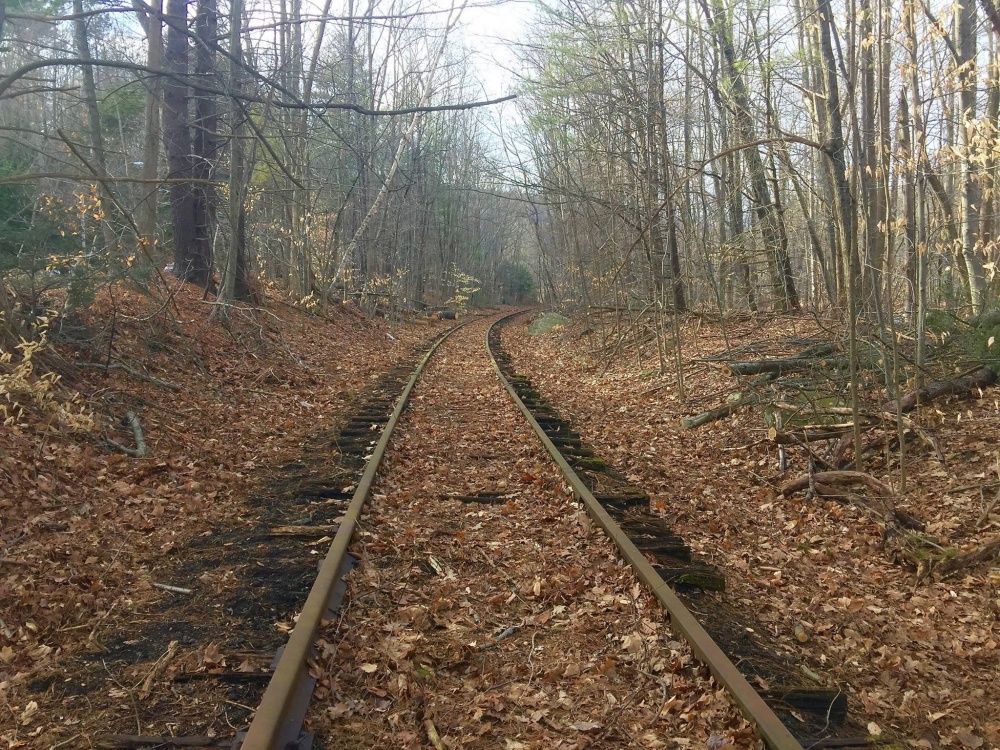 Above: CMRR tracks in Phoenicia that have recently been cleared by volunteers. Photo by Ryan Lennox.

The CMRR’s decision to settle its lawsuit against Ulster County this week was likely a pragmatic one designed to avoid a bad outcome in court. The railroad suffered a setback in the case in December, when a judge issued a ruling in the lawsuit that tossed out a few of the CMRR’s claims and preserved the county’s ability to evict the railroad, according to the Daily Freeman. (See the ruling here.)

Ulster County has issued a request for proposals for tourist train operators for the corridor, and the CMRR is planning to put its hat in the ring, according to the Daily Freeman. Proposals are due May 6.