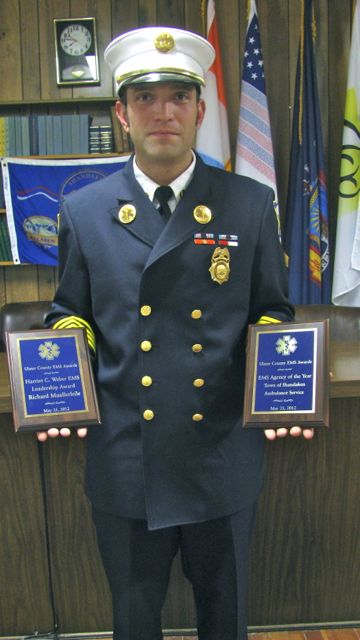 The town of Shandaken’s Ambulance Service was recently voted Agency of the Year for the Hudson Valley region.

The Hudson Valley Regional EMS Council, which represents almost 200 EMS squads from Dutchess, Orange, Putnam, Rockland, Sullivan and Ulster Counties, awarded Shandaken’s unit for their service at their annual dinner on May 25 at the Benedictine Auditorium in Kingston.

With the regional honors, Shandaken’s unit is now eligible for a statewide award in October. The winner will be selected from the regional award recipients in each of the 18 EMS regions in New York State.

Last year's unprecedented flooding pushed first reponders across the region to their limits. Shandaken Ambulance Service Captain Rich Muellerleile, who was also awarded with the EMS Leadership Award for 2011, said he thought the unit’s heroism during and after the flooding from Tropical Storm Irene was a factor in their recognition.

“We had people that worked five days straight,” Muellerleile said. “[During the floods,] you could turn around and say, ‘You’re at the end of your operational period, you need a break,’ and they'd be like,’ I don't want to.’ That's the sense of community that these people really exemplify. And we're seeing an ever-increasing trend since then. Morale's ridiculously high.”