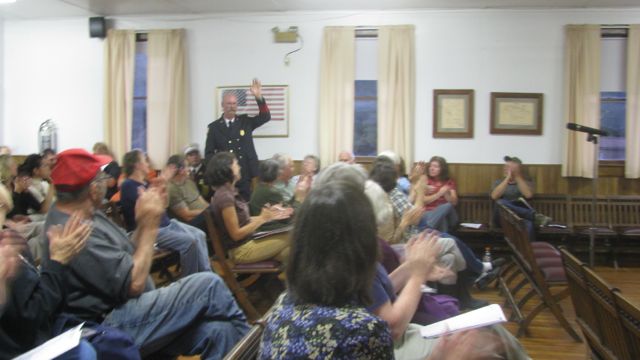 A crowd of 45 Shandaken residents told the Shandaken Town Board on Monday that they were concerned about what will be done in the future to mitigate the effects of floods.

Elizabeth Winograd, the owner of the Copperhood Inn on Rte. 28, said that a new grassroots organization named "Save Our Shandaken," or "SOS" for short, has been formed to represent the interests of people living in Shandaken in discussions with the government agencies controlling the Catskill watershed. The group held its inaugural meeting on Saturday at the Copperhood Inn, according to the Daily Freeman.

Winograd, one of the organizers of SOS, called for a coordinated effort by residents and funding agencies to express ideas on what should be done to avoid future flooding. 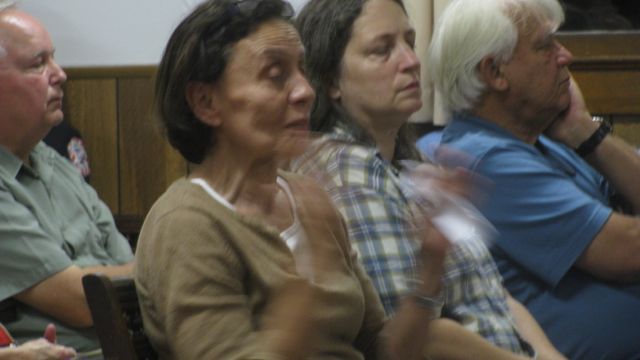 Elizabeth Winograd, Save Our Shandaken, speaking at Sept 12, 2011 Town Board meeting: Photo by Rusty Mae Moore

"We are looking for an engineer to put together a proposal to work on all of the streams and all of the water areas in the town," said Carol Shalaew, another SOS organizer. SOS plans to hire an attorney and to develop a proposal to “submit to the proper authorities that can help us with this," she said.

Multiple people voiced the same sentiment: that there is more concern for trout spawning and New York City drinking water than for the well-being of people living in the Catskills.

Town Supervisor Rob Stanley began the meeting by asking everyone present to honor the emergency responders who worked tirelessly during the flood. He asked key people to stand and be honored. Firemen, ambulance crews, heavy equipment crews, electricians, communications technicians, medical support people, food providers, shelter providers, rescue workers, the State, FEMA, Belleayre Mountain staff, neighborly collaboration, and “150 national guardsmen” were singled out for a round of applause by everyone present. Ken Jacobs and the Phoenicia Rotary came in for special thanks for coordinating the gathering and distribution of supplies, and for helping with the cleanup.

Stanley spoke of the difficulty of communicating with the outside world at the height of the flood, and that media such as the New York Times and TV News Organizations had struggled to reach him. He singled out the Watershed Post, “whose editors and correspondents were available to get not only news, but necessary information, out to loved ones concerned about local friends and neighbors.”

Stanley mentioned in his prepared remarks that the Allaben Weather Station recorded “between 100 and 500 year flood levels.”

Citizens attending the Sept 12, 2011, Town Board meeting, applauding people who helped out in the flood: Photo by Rusty Mae Moore

Several speakers lauded the efforts of Belleayre Mountain Ski Center for being a center of support for people who had lost their homes, and for making food and supplies available to people in need during the flood. Tony Lanza, the head of Bellayre Mountain Ski Area, and his staff received special thanks. 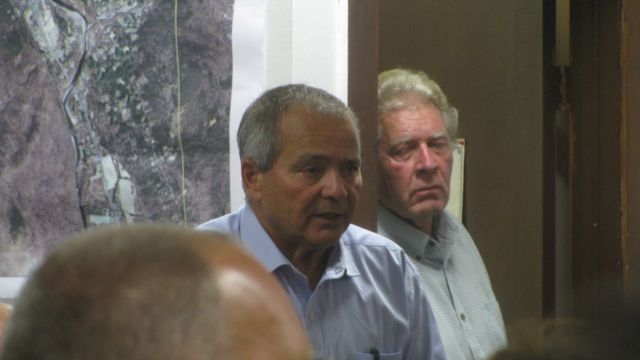 Speakers in the audience reiterated that state officials should realize that Belleayre Mountain Ski Center has a key role in the area beyond its function as a ski resort. One attendee quoted County Executive Mike Hein, who spoke at the Belleayre Benefit Concert: "For years, people in this area have been working to save Belleayre. This time Belleayre saved the people of this area.”

“Where else in the region could we land Chinook helicopters?” the attendee said.

Supervisor Stanley received a standing round of applause from citizens, town employees, and the other Town Board members for his leadership during the flood crisis. He applauded everyone at the meeting right back. 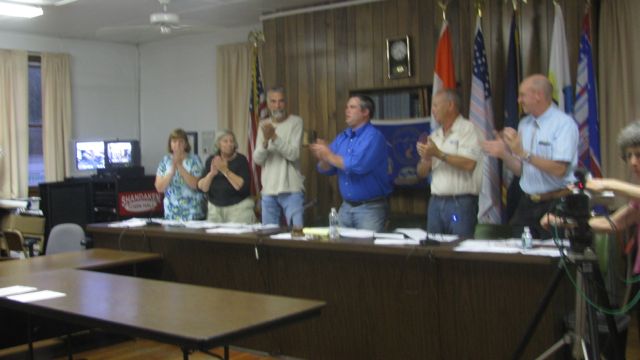 "We will have cell service"

“We will have cell service,” announced Stanley at the meeting on Monday.

The supervisor reported that AT&T stepped forward and agreed to implement cellphone service using the existing unused tower owned by Mariner Tower II, LLC. In exchange, the town has agreed to extend the lease on the tower by five years to allow a minimum of 20 years of service. The Town Board unanimously agreed to this extension at the meeting. Other providers such as Verizon will now be able to use the tower as well.

(Stay tuned for a full story on cellphone service in Shandaken soon, on the Watershed Post's Shandaken page.)

Diverse flood-related issues were raised at the meeting.

Al Higley, Jr., who is running for a seat on the Shandaken Town Board in this fall's election, raised the issue of taking down “Road Closed” signs immediately when they are no longer needed.

"'Local traffic only' signs are cutting deliveries and hurting business,” he said. 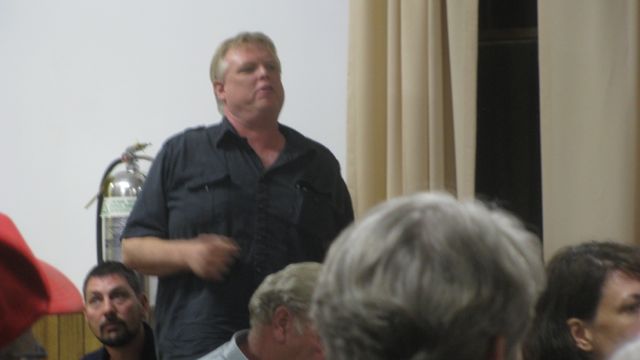 After the meeting, Rick Ricciardella, the water supervisor of the Phoenicia Water District, told the Watershed Post that immediate action needs to be taken in the stream beds.

"Attention must be paid to dredging and cutting and clearing dead trees left by the flood or people will die in the next flood," he said.

Ricciardella suggested that any dead trees that are cleared out of the streams should be cut and distributed as firewood by the town. (He made a similar comment in the August Town Board meeting, before the flood.)

Undersheriff Frank Faluotico asked people to remember that many county roads in the town may need repairs. He suggested that residents contact their county legislator to bring these situations to the attention of the county. There are also safety problems caused by undercut streams and changes in the stream beds, he said.

"The best thing would be that people stay away from streams," he said.

The Town Board held an emergency meeting during the storm to appoint Richard Stokes as the Emergency Building Inspector. An exhausted Stokes told the Watershed Post after the meeting that “everything is inspected.”

Stanley announced that the meeting of the Shandaken Area Flood Assessment and Remediation Initiative (SAFARI) has been postponed to 3:00pm on September 19. This committee was set up last year after flooding in Phoenicia, and includes participation of Cornell Community Cooperative and Ulster County Soil and Water Conservation District. 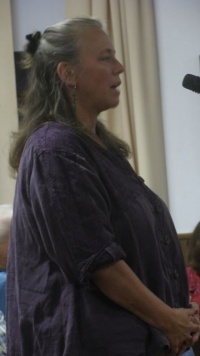 The Town Board also postponed its consideration of the ongoing status of the Phoenicia sewer system from September 21 “until at least October.” Town officials reiterated that, contrary to rumors, “Phoenicia water is safe to drink according to the Board of Health.”

Tamara Cooper, the director of Family of Woodstock, attended the meeting to emphasize that Family has offered its services to the Town of Shandaken. She pointed out that mental health services are in high demand in the aftermath of a natural disaster, and said that Family could help in this area. She also offered to help start food pantries.

The Catskill Mountain Bicycling Club will sponsor a benefit to help children who have lost bikes in the flood. This will take place on October 9.

The complete videorecording of the September 12, 2011 Town of Shandaken Board meeting will air on public access channel 23 on Thusday, September 15. 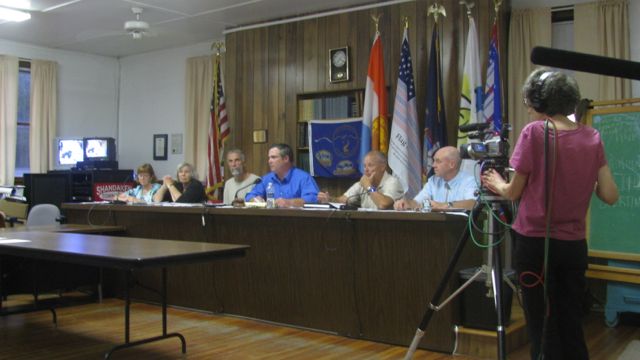