Richard Treitner, an artist, poet, and self-described shaman who lives in the small hamlet of Pine Hill on the western edge of Ulster County, came home from Thanksgiving this year to find that his house had been set on fire.

Treitner, who is HIV-positive and once led the New Paltz Gay Pride Parade, says it is possible that he was targeted because he is gay.

The State Police are investigating the incident, which they believe happened around midnight on Thanksgiving, as an arson.

According to Treitner, his Academy Street house sustained thousands of dollars of damage from the blaze, which was set on the exterior woodwork of the house's garage.

"It was defintely arson," Treitner said. "We think that there was some undercut in the wood where there had been termites and water damage; exposed, splintered wood that would have been easy to set on fire. "

Treitner, who had been visiting relatives for the holiday, found burn marks on the front of house when he returned the Friday after Thanksgiving. Every door had been kicked in by emergency personnel. But while the exterior was scorched, the interior of the house, including some of Treitner's artwork, was unharmed. 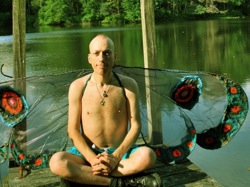 Treitner, in an outfit he says he wouldn't wear in Pine Hill"There is a chance it was a hate crime," he said. "I've had some problems in the past with people making comments and threats."

In fact, Treitner said, one of the reasons he moved to Pine Hill from Woodstock five years ago was because he was being threatened for being gay.

"That was part of why I moved," he said. "And I wanted to get my own house. I had been homeless when I had been younger, so it had been a lifelong dream to have my own home. I thought I had my own sanctuary here in Pine Hill."

Treitner said while his house "sticks out" in Pine Hill because of its hot pink door, he isn't particularly flamboyant in the small Ulster County hamlet he calls home.

"By almost all accounts, I'm a very nice guy," he said. "I don't really look for trouble. I don't go out of my way to swish around, but I don't hide who I am. In Woodstock I'll wear my fairy wings and do tarot readings on the green in the summer for tourists, but I don't do that in Pine Hill." 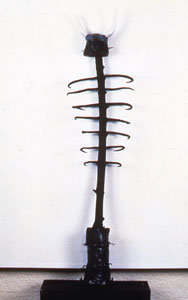 "Totem," a sculpture by TreitnerTreitner's paintings and photographs, which have been featured in galleries up and down the east coast as well as in Woodstock and Phoenicia, are not so demure. In 2004, a New York Times reviewer described his work as "psychedelic Fauvist," and his art is apt to feature motifs like real butterfly wings and men kissing. Much of his work reflects his experience with HIV and with bipolar disorder, illnesses which have kept him on permanent disability since 1993. One sculpture, from 1989, calls to mind an emaciated ribcage.

Treitner has been living in his home since the fire, enduring the scorch marks and a new sense of unease. But he says the community's response to the incident, and to handwritten posters that he has put up about it all over Pine Hill, has been positive.