The Heron: A Chef's Tale 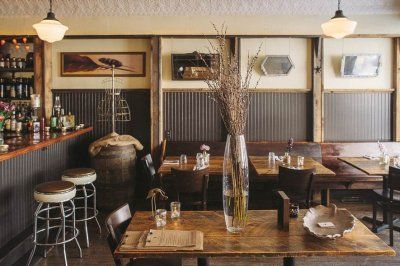 Ohio native Marla Puccetti, who co-owns The Heron in Narrowsburg, NY with her chef/partner, Paul Nanni, grew up in the restaurant industry – her uncle ran a steakhouse and her father owned an Italian restaurant – but it was not the career path her family envisioned for her.

“I begged my dad to let me work for him, but he wanted me to go to college and get a nice office job,” she recalls. “This is tough work, it’s a tough business and he wanted something different for me.”

Marla earned her bachelor’s degree from Ohio University and moved to New York to attend New School University for her graduate degree. She embarked on a successful television production career, working for the Oxygen Network, Hornet Inc. and City Lights Media Group as well as MTV, VH1, Discovery, TLC, and the Cooking Channel.

She met Paul, a Detroit-area native and Culinary Institute of America (CIA) grad, on the 2005 set of “Inner Chef with Marcus Samuelsson,” the celebrity chef’s first television show on Discovery Home Channel. Paul had been working alongside Samuelsson at Aquavit and was recruited as the show’s food stylist and sous chef. Marla was one of its producers. The two connected over a love of great food and indie rock.

Paul spent the next five years working as executive chef at a number of high-profile restaurants as well as running a catering business. Marla continued to produce. They talked on and off about a mutual dream to open their own restaurant. Paul and Marla lived in Brooklyn, but spent many weekends in Woodstock and Saugerties in Ulster County. It was a visit to a friend’s home in Sullivan County that first put Narrowsburg on their radar.

“We kind of fell in love with the town,” Marla recalls.

They were also inspired by the vast resources of the region. “It seemed like a good fit with the farms up here,” Paul says.

They ate at the Main Street Café, which was located in a space that had previously housed both a pizza shop and a diner.

“I jokingly said to my friend, if they (the café) ever go out of business, give us a call and maybe we’ll move here,” Marla says. “A year and a half later, on Labor Day 2011, we got that call.”

Marla and Paul met the landlords on October 1, signed a lease on Halloween, and moved to the Catskills around Thanksgiving. The couple did some minor renovations to the former café space and opened as The Heron on January 14, 2012.

“We wanted it to feel like home,” Marla says. “Warm, inviting, open, slightly romantic, but not pretentious. Country, but city without being garish.”

“We weren’t expecting that, but people will drive an hour, even two hours to have dinner with us,” Marla says.

Everything from the stocks to the charcuterie is made in-house. Paul sources as much as he can from local farmers and artisan producers – the “roots and marrow” of The Heron -- including Silver Heights Farm in Jeffersonville and Cochecton Center for “fantastic” organic eggs, herbs and starters; Tonjes Farm Dairy in Callicoon for yogurt, buttermilk and cheeses; Calkins Creamery in Honesdale, PA; and Java Love Coffee Roasting Co. in Bethel. Hilly Acres Farm in Jeffersonville is a great source for naturally raised pork, beef, poultry and lamb, Paul says.

In their rare free time, the couple enjoys spending time outdoors in and around their adopted hometown. Paul takes a boat out on the Delaware River for catch and release fishing.

Marla says she is proud to have circled back to her restaurant roots.

“My dad passed away, so he never got a chance to see this,” she says. “But I think he would have been very supportive.”