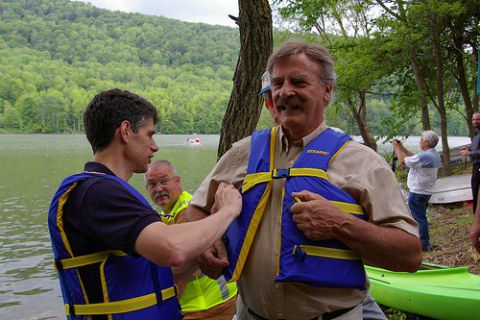 Above: Paul Rush, the Deputy Commissioner of the DEP, helps Jim Eisel, the Chair of the Delaware County Board of Supervisors, into a life preserver at the boat launch on the Pepacton Reservoir on May 24, 2012. Photo by Julia Reischel.

It's finally happened: Recreational boats are allowed on the Pepacton, the Schoharie, and the Neversink reservoirs.

Those three Catskills reservoirs, which supply the bulk of New York City's drinking water, have been off-limits for generations. Before this week, only metal rowboats were allowed on them, and then only for those with proper fishing permits. Now, canoes, kayaks, sculls and small sailboats are free to roam the waterways. (For specifics on navigating the rules and regulations, see our boating guide.)

This week, the New York City Department of Environmental Protection, which runs the reservoirs, threw three separate opening ceremonies at the three city-owned lakes in three different Catskill counties. (A fourth NYC resevoir, the Cannonsville in Delaware County, has been open to boating in a pilot program for three years.)

Videographer Jessica Vecchione filed a video report of the Pepacton ceremony, which you can see below.

"A big deal" -- but not on every reservoir

The celebrations were an attempt to prove a point: the city is committed to boating in the Catskills.

Deputy DEP Commmisioner Paul Rush personally cut the ribbons at all three ceremonies. At the Delaware County Pepacton Reservoir opening ceremony, he told a crowd of 40 dignitaries that "together, we have proved that this could work."

"This is a big deal," Rush said. "I know there will be at least one visit [to the Catskills] because of this. Roger Sokol, from the New York State Department of Health, will be staying in Andes Friday night."

But Rush had some sobering news as well: the Catskills' two remaining reservoirs, the Ashokan Reservoir in Ulster County and the Rondout Reservoir in Sullivan and Ulster Counties, aren't likely to be hosting sailboats and canoes anytime soon.

Both the Ashokan and Rondout reservoirs are “terminal reservoirs,” Rush said: the last stop before faucets in New York City,

“We have to be somewhat more protective there, more cautious, before we can consider moving to those reservoirs,” he said.

Trusty correspondents have helped us cover the historic opening of all three reservoirs.

Diane Galusha of the Catskill Watershed Corporation was on hand at the opening of the Schoharie Reservoir in Greene County yesterday and sent us several photos. Here's the ribbon-cutting moment at Devasego Park in Prattsville:

Jennifer Grimes, the owner of the Eureka Market in Grahamsville, which now offers steam-cleaning for Neversink-bound boats, sent us pictures from the opening ceremony at the Neversink boat launch in Sullivan County this morning. Here's one of a kayaker getting the first taste of Neversink paddling:

You can see all their photos  -- and ours as well -- in our reservoir opening slideshow below.

Openings and a parade in Andes this weekend