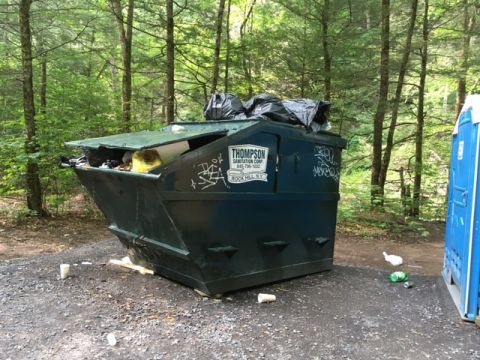 Above: A dumpster full of trash at the Peekamoose Blue Hole trailhead in Denning on July 7. Photo by Joe Ferrara.

Volunteers are invited to help clean up trash and litter this Sunday, July 17 at Peekamoose Blue Hole, a popular swimming hole in the Ulster County town of Denning that has been ground zero for conflicts in the Catskills over the growing popularity of the region's natural attractions.

Blue Hole was so overrun with visitors and the trash and parking issues they bring with them last summer that in May the New York State Department of Environmental Conservation (DEC) issued emergency regulations banning littering, glass containers, camping, fires, generators, barbecue grills and boomboxes from the swimming hole.

In addition, DEC forest rangers are stationed at Blue Hole, and a dumpster and a kiosk have been installed.

So far, these new measures appear to be helping keep the remote swimming hole clean, according to Adam Bosch, a staffer for the New York City Department of Environmental Protection (DEP).

Bosch has visited Blue Hole on behalf of the DEP every other weekend this summer since Memorial Day, he said. (The swimming hole is located on the Rondout Creek, which feeds into the city’s water supply.)

“I’ve been having hundreds of conversations,” he said. “I have met people from the city and Long Island and local folks . . . and I’ve also met people from Boston, Philadelphia, California, Washington DC, Virginia, Australia, from the UK and from other countries. When they get there, they’re all still impressed by the color of the water and the depth of the swimming hole.”

Bosch said that the visitors are following the new regulations—with some nudging from him and DEC forest rangers.

“I would say I notice people being better about picking up after themselves,” he said. “You’re not seeing this huge number of barbecue grills or the glass bottles. You’re certainly not seeing the boomboxes and loud music devices, and on the rare occasion when one is brought in, the rangers are doing a great job of saying ‘That’s not allowed.’ People are doing the right thing.”

“It doesn’t hurt every once in a while to throw in the fact that there are bears in the woods that are attracted to garbage,” Bosch added.

Bosch said that the DEC is regularly emptying a dumpster that has been installed at the swimming hole. The limited number of parking spaces near the swimming hole is still causing trouble for visitors, he added.

The New York-New Jersey Trail Conference and its Catskill Conservation Corps will host volunteer trash pickups at Blue Hole every third Sunday of the month from July through October, according to a press release issued by the group. To sign up for the cleanup on July 16, click here.

The group is launching a similar clean-up regimen at Colgate Lake in the Greene County town of Jewett, another magnet for trash.

Correction, 7/13/16: An earlier version of this article stated that the cleanup would be held "Sunday, July 16." July 16 is a Saturday. The cleanup will be held on Sunday, July 17.