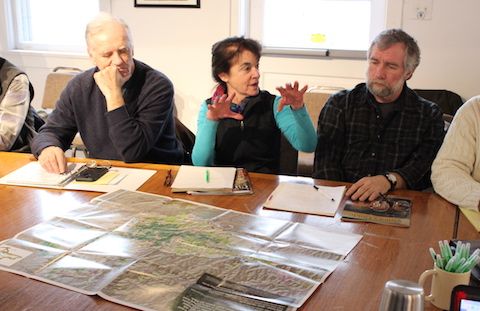 Above: Tom Joyce of Andes in Delaware County, Lisa Lyons of Livingston Manor in Sullivan County and Robert Eggleton of the town of Rockland in Sullivan County talk about a map of the Catskills at a Jan. 23 forum about tourism and economic development in the region. Photo by Rebecca Andre.

At a forum at the Catskill Center for Conservation and Development in the Delaware County town of Arkville on Saturday, Jan. 23, officials from four Catskills counties agreed that tourism is key to the economic future of the Catskills region.

"This is not your grandfather's Catskills," said Geddy Sveikauskas, who led the discussion. Sveikauskas is the founder of the Woodstock Times newspaper and a member of the board of the Catskill Center.

In front of an audience of 23 people, representatives from the town of Andes in Delaware County, the town of Hunter in Greene County, the hamlet of Livingston Manor in Sullivan County and the town of Woodstock in Ulster County brainstormed ways to work together to attract more tourists to the Catskills.

During a lively, passionate discussion, they called for the small, often isolated rural communities sprinkled in and around the Catskill Park to cross county lines and work together to brand themselves and create regional “synergy” to boost economic development.

This kind of regional discussion is uncommon in the Catskills, a region that is double the size of the state of Delaware. People from multiple counties rarely gather in the same place—especially in the winter, when traveling is arduous. The forum is part of a series of winter forums hosted by the Catskills Center about economic issues facing the region.

Above: Twenty-three people gathered at the forum on Saturday. Photo by Rebecca Andre.

"Every community has a beating heart of its own," said Sveikauskas, before introducing the first speakers, from the town of Andes: Thomas Joyce, who sits on the board of the Andes Town Council and chairs the Andes Business Committee, and Wayland “Bud” Gladstone, Andes’ Town Supervisor.

Gladstone, who is also a farmer, talked about the importance of agricultural and food tourism to economic development. He said that the average age of a farmer in Delaware County is 58 years old, but that because of new blood like Cyndi Wright of Dirty Girl Farm, "over the past decade or so, farming has come back."

"Local food is not a trend anymore, it's a fact," said Joyce. He pointed to the need to "develop Andes as a brand," thereby encouraging younger people to come to Andes to live and farm.

Next to speak were representatives from Woodstock, including Town Supervisor Jeremy Wilber, the “flea market queen" Janine Fallon-Mower and her husband John Mower, a former Woodstock supervisor.

Wilber summarized the history of Woodstock as first an industrial town of tanning, quarrying and mills that was transformed by the 1969 Woodstock Music Festival. (The festival actually took place in the Sullivan County town of Bethel, 60 miles away, but that hasn’t deterred a generation of nostalgic hippies from moving to Woodstock.) Wilber said that the Woodstock festival is no longer enough to keep the local economy going.

"We cannot ignore that the festival boosted the economy for 25 years, but it's gotten old," he said.

Mower talked about the importance of capitalizing on "external forces" such as lower gas prices, lodging websites like Airbnb, the increase in NYC employment and the general migration of city folks to the countryside.

Instead of competing for tourist dollars created by these new forces, Mower said that Catskills towns should all to work together towards an "area synergy."

Above: Geddy Sveikauskas, the founder of the Woodstock Times and a member of the board of the Catskill Center, moderated the forum. Photo by Rebecca Andre.

Hunter: “We need to diversify”

Representing the town of Hunter in Greene County was Town Councilman Anthony Coiro and Mike McCrary from the Hunter Chamber of Commerce.

"We are the park of New York City," said Coiro, referring to the Catskills, which are just 100 miles north of the city. Coiro said that the town of Hunter transitioned decades ago from a family community into a singles, bar-oriented community, and then has once again become a family-friendly community. Only one of the two ski resorts that used to attract skiers to the mountains of Hunter is in working order, while the other sits "empty and dilapidated,” he said. McCrary pointed out that the town of Hunter was once a summer community.

"The changing climate is affecting our industries; we need to diversify," said Coiro. Hunter Mountain Ski Resort is trying to do that by serving tourists as a summer wedding destination as well as a winter attraction.

McCrary touched on a long-simmering local tension when he criticized "the intrusive hand of the DEP [the New York City Department of Environmental Protection]” for having a negative impact on Hunter’s economic development. Coiro agreed.

At this point, Woodstock Supervisor Jeremy Wilber jumped in, saying that the "DEP is the executor of the EPA [the federal Environmental Protection Agency],” which must find a "balance between resources" for upstate residents and New York City.

Livingston Manor: We must work together

Sveikauskas redirected the conversation away from the issue of the DEP’s role in the Catskills by giving the floor to the representatives of Livingston Manor of Sullivan County: Chamber of Commerce President Lisa Lyons and Rockland Town Supervisor Robert Eggleton.

Lyons stood, spreading a map on the conference table, and pointed out the need for a more comprehensive map of the Catskill Park and its surrounding areas, “even the small parts."

Lyons also used the term "synergy" when describing the need for farmers, producers and local businesses to work together to promote tourism in the smaller hamlets of the Catskills.

Eggleton, whose town of Rockland is known for world-class fly fishing along the Beaverkill River, said that Catskills small towns must "clean up the landscape in and out of town."

"Let's get the young people involved"

Other attendees at the forum offered suggestions about how to attract tourists and boost the local economy.

"The Catskills are bigger than the Catskill Park," said Don Dales of the Delaware County town of Hobart, which is home to the Hobart Book Village.

"Let's get the young people involved," said Cyndi Wright, the owner of Dirty Girl Farm in Andes. "They are a vibrant and energetic resource that know a lot about the Internet."

In summary, Sveikauskas cited the need to "learn to pull together in our communities" and to develop “unique brands” within “the new Catskills.”

The Catskill Center for Conservation and Development will host three more winter forums this season. They will take place in February, March and April and will discuss recreational and second-home tourism, digital business prospects and the plans of the Catskill Interpretive Center in Mount Tremper. Contact Erik Johanson for details at 845-586-2611 or email ejohanson@catskillcenter.org