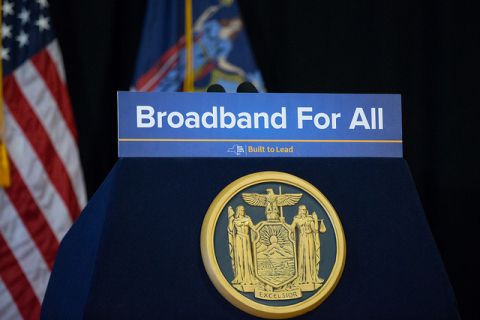 Above: The podium at Gov. Andrew Cuomo's August 3 announcement about $54.2 million in grants slated for broadband internet service across New York State. Photo via the governor's Flickr page.

Hundreds of miles of remote rural roads and thousands of local homes, businesses and anchor institutions will be lifted from the telecommunications Dark Ages following the announcement of new NY Broadband Program grants.

Round one award winners in Gov. Andrew Cuomo’s initiative to connect every New Yorker to the fiber optic 21st century were announced on August 3.

The grants were part of an intensive $500 million plan from Governor Andrew Cuomo to modernize the entire state by the end of 2018.

Twenty-five projects spanning 27 counties in the Catskills, the Adirondacks and beyond will receive a total of $54.2 million in state funding, packaged with $21.6 million in private investment, according to a press release from the governor’s office.

Heart of the Catskill Communications, a collaboration between the Margaretville Telephone’s cable arm and the Catskill Watershed Corporation, the MARK Project Inc., the Greene County Industrial Development Authority and the towns of Middletown and Roxbury in Delaware County, Gilboa and Conesville in Schoharie County, and Halcott in Greene County, also received $1.2 million.

Another second round of broadband grants is already in motion. Applications for additional upgrades to cell phone and internet capability and its infrastructure are slated for submission in the late fall, with many of the same smaller telecom providers expected to seek more grant dollars.

While some Catskills communities were left out of round one, notably the town of Lexington in Greene County (see our related story, “Lexington overlooked in round one of state broadband grants”), officials were largely pleased by the state’s recognition of their neighborhood needs.

Margaretville Telephone’s $4.7 million grant, one of the largest grants issued in round one, will be spent to extend over 130 miles of broadband, telephone and cable television services to 1,900 unserved residents, merchants and organizations within segments of the towns of Andes, Bovina, Hardenburgh, Middletown and Roxbury.

In addition, the network will be able to meet future cell tower connectivity necessities, provide business-class ethernet circuits and support the Delaware County Emergency Services networking, according to a press release from the Margaretville Telephone Company.

“The compelling strength of the DCBI grant applications has been the collaborative effort put forth by the partner companies to address the financial challenges of deploying high-capacity broadband services into the rural segments of our communities,” Margaretville Telephone general manager Glen Faulkner said.

“This project leverages the resources of three local service providers, along with multiple economic development agencies, all working together to develop the most cost-effective business model,” Faulkner said.

“We were extremely happy to get the news about State Telephone and all the regional providers,” Greene County Economic Development, Tourism and Planning Department director Warren Hart said.

The $8.7 million award to Coxsackie’s State Telephone Company, Inc. was the “second largest award in the state, brought about because of the commitment the county legislature has made with private companies. Now we’re ready to dive into round two,” Hart said.

Full disclosure: Lissa Harris, the publisher of the Watershed Post, is a shareholder in the Margaretville Telephone Company. The business was founded in 1916 by Harris's great-great-grandfather, John Birdsall, and remains in the family. Harris is not employed by the company or involved in its management.

"Lexington overlooked in round one of state broadband grants," August 16, 2016