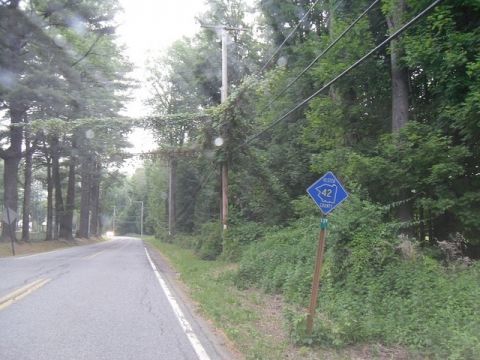 Above: County Road 42 in Ulster County, near Moon Haw Rd. in the town of Olive where a hiker was lost on Monday, July 11. Photo by Doug Kerr, via Flickr.

New York State Forest Rangers and local first responders spent Monday, July 11 searching for a hiker who was lost in the woods in the Ulster County hamlet of West Shokan, according to a spokesperson for the New York State Department of Environmental Conservation.

The man, a 62-year-old hiker from New Jersey, is not being identified by the DEC, according to Wendy Rosenbach, a spokesperson for the DEC’s Region 3 office.

The man was reported lost around 3:30 p.m. on Monday in the forest near Moon Haw Rd., Rosenbach said.

A local first responder involved in the search said that the man had begun hiking in the area on Sunday and was believed to possibly have spent the night in the woods. The DEC could not confirm this detail.

The man was located safety around 7:15 p.m. near Moon Haw Rd., Rosenbach said.