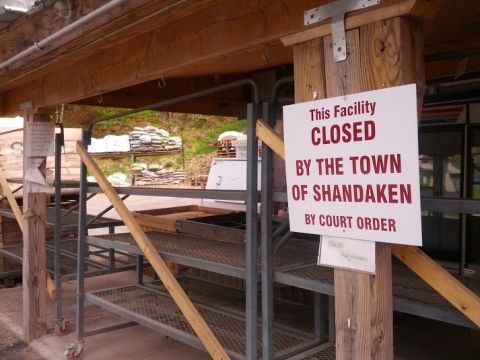 The owners of a defunct farmstand in the Ulster County town of Shandaken must pay the town $126,200 in fees for “flagrant and egregious” violations of town law that occurred in 2012 and 2013, an Ulster County Supreme Court judge ruled on Jan. 28.

Al and Alfie Higley began selling produce on a residentially-zoned stretch of Route 28 in 2004. Hanover Farms, as their Mount Tremper farmstand was called, had a long and litigious history with the town of Shandaken before it was ordered to close by a judge in 2013.

In March 2012, the Higleys began building an addition onto their farmstand without a permit. Although the town issued several stop work orders, the Higleys ignored them and continued construction on the farmstand for 10 days. Then the Higleys sued the town, arguing that the town’s stop work orders were not valid. All the while, Hanover Farms remained open.

The town countersued, arguing that the Higleys did not have a permit to operate their business and that they had violated the town’s building code in multiple ways. Shandaken asked the court to fine Hanover Farms $200 per day for every day that the farmstand violated the code.

On Thursday, Jan. 28, Acting Supreme Court Justice Mary Work granted the town's request for a fine, ordering the Higleys to pay the town of Shandaken $126,200, the maximum amount allowed.

“Imposing the maximum fines for the violations of chapter 74 is reasonable under these circumstances,” Work wrote. “The tax payers of Shandaken should not have to bear the expense of this litigation.”

That amount is the sum of $200 per day for the 631 days, from March 18, 2012 to Dec. 9, 2013, that Hanover Farms remained open without a permit after building the illegal addition, according to the decision.

Work explained her reasoning with a scathing critique of Hanover Farms:

The Court has elected to impose the maximum per day fine for the period [Hanover Farms] violated chapter 74 of the Town Code because of the egregious and flagrant nature of their violations. Defendants continued to work on their building knowing the work was far beyond the scope of their permit and despite being ordered to stop. They did not arrange for inspection of the work they had done. They did this for ten days until they had completed the renovations and expansion they desired to make. They continued to operate a business open to the public in a building on which they had done unauthorized structural and electrical work which had never been inspected. They continued to sell to the general public from a farm stand that was located dangerously close to the road.

According to court documents, the Higleys’ lawsuit against the town of Shandaken has cost the town $60,000 in legal fees.

Larry Wolinsky, the attorney for the town of Shandaken in the case, confirmed that amount and said that the litigation has also cost the town more in administrative fees and time.

After a judge ordered Hanover Farms to close in 2013, the Higleys opened a new location, called Greenheart Farms, a few miles down Route 28 in the hamlet of Shokan in the town of Olive. (Greenheart Farms has also run into regulatory concerns, according to the Daily Freeman.)

Reached by phone at Greenheart Farms on Tuesday, Feb. 2, Al Higley said that he had not been told about the recent court decision or the $126,200 fine yet and therefore could not comment on it. Hanover Farms’ lawyer, Philip Wellner, did not return a call for comment.

The Town is pleased with the outcome of this case, due to the diligent work of our law firm Jacobowitz & Gubits, LLP, after many years of litigation. We would have liked to have resolved this civilly and without litigation but Hanover Farms, Inc chose a course of action to their own detriment. With a new Farm Stand due to open this spring, which meets all of the requirements of a law constructed in 2012 to help promote these types of businesses, the Town has well established its desire to bring these types of businesses into Town while still providing certain protections for their neighbors and visitors alike. We hope to have final resolve on this as quickly as possible. The saddest fact of this case, and as cited one of the final lines of the Court's decision is the fact that the Town's taxpayers had to incur the cost of this unnecessary action brought by Hanover Farms, Inc. We are grateful that the fines imposed cover these costs.

Building a Farm Around the Table: Horton Hill Farm