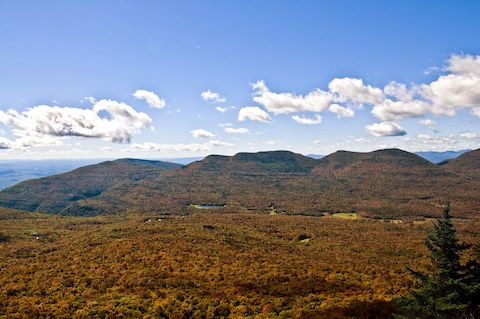 Above: Indian Head and Twin Mountains on the eastern Devil's Path, photographed in October 2012 by EricAOrtner.

New York Department of Environmental Conservation forest rangers and first responders from multiple fire departments and rescue squads helped rescue a 34-year-old Philadelphia woman who injured her ankle while hiking the Devil's Path Trail in the Greene County town of Hunter on Friday, April 29, according to a press release from the DEC.

The woman was hiking in a group of eight people on Friday afternoon when she sustained a lower leg injury, the press release states. Her fellow hikers "stabilized and wrapped the woman’s ankle and began to help her walk down the trail."

Greene County 911 received a call for help from the hiking group at 5:21 p.m. on Friday evening, the release states.

Three DEC Rangers hiked up to meet the group on Sugarloaf mountain, where they helped the injured hiker down the trail, eventually carrying her out in a litter to the trailhead on Mink Hollow Rd., the press release states.