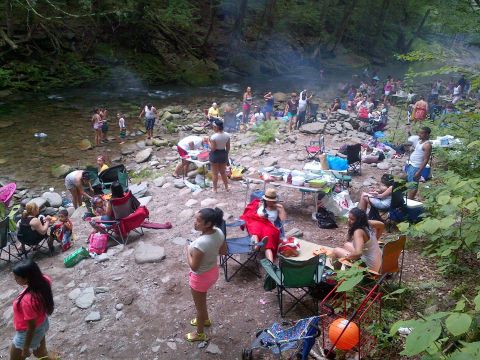 Above: A crowd at the Peekamoose Blue Hole on a summer day in 2015. Photo via the NYS DEC.

The New York State Department of Environmental Conservation issued emergency regulations on Wednesday, May 25 to protect Peekamoose Blue Hole, a popular swimming hole on the Rondout Creek in the Catskills that was overwhelmed with visitors and trash last summer.

According to a DEC press release issued on Wednesday, over 700 people packed the swimming hole on one weekend day last summer, leaving "human waste, refuse, fires and broken glass" in their wake.

The pattern repeated itself weekend after weekend, according to the DEC, because of the swimming hole's designation as one of the "best swimming holes in the nation" in numerous articles and magazines.

The reguations, which will be in place for the 2016 Memorial Day weekend, prohibit camping, fires, generators, glass containers, radios and all "audio devices" at the swimming hole, which is located on Peekamoose Road in the Ulster County town of Denning.

The new rules also restrict parking to designated parking areas and reiterate the illegality of parking along the shoulder of the narrow forest road. Hours at the swimming hole are restricted, and Port-a-Potties and a dumpster will be installed at the site.

The regulations go into effect immediately and will stay in effect for 90 days, according to the DEC's announcement. Permanent new regulations for the Blue Hole are in the works.

Peekamoose Blue Hole will be patrolled by both DEC personnel and police from the New York City Department of Environmental Protection. The water in the swimming hole flows into the Rondout Reservoir and then on into the New York City water system, so the DEP is keenly interested in keeping it clean.

Read the full text of the DEC's announcement about the new regulations below:

The New York State Department of Environmental Conservation (DEC) is implementing emergency regulations effective May 25, 2016 for the Blue Hole and Peekamoose Valley in the Town of Denning, Ulster County. The purpose of the emergency regulations is to increase public safety and reduce impacts to the environmental resources of this very popular swimming area located on Rondout Creek in the Sundown Wild Forest. The area is also in the New York City drinking water watershed.

In the summer of 2015, day use of the area referred to as the “Blue Hole,” a large, deep and very cold swimming hole in Rondout Creek immediately upstream of the camping area, increased exponentially compared to previous years. This was due in part to social media coverage and numerous websites, including national magazines, touting the Blue Hole as “one of the best swimming holes in the nation.” As many as 700 people have crowded into the small area on a weekend day. This dramatic increase in usage has resulted in rampant human waste, refuse, fires, broken glass and an overwhelming of the parking areas which spilled out all along Peekamoose Road. The local communities have expressed safety concerns with the road not being passable by emergency service vehicles due to blockage by illegally parked cars and concerns with the sheer number of visitors.

“The immediate implementation of Emergency Regulations for this property is necessary for the preservation of public health, safety and general welfare of both users of the property and nearby residents,” said Acting DEC Commissioner Basil Seggos. “DEC encourages all interested visitors to enjoy this incredible resource responsibly.”

The Emergency Regulations will:

• Restrict hours that the area is open (except for the nearby designated camping area) to one half hour before sunrise to one half-hour after sunset;

• Require the use of the portable restroom facilities for human waste disposal and the dumpster for all other waste;

• Prohibit camping, all fires (including charcoal fires, wood fires, gas grills, propane stoves or other portable stoves) and the use of portable generators at the Blue Hole. (Limited use of the above will be allowed at the nearby designated camping area only);

• Limit parking to designated parking areas (parking along the shoulder of the road is already prohibited by the Town and is a Tow Away Zone); and,

“The emergency regulations implemented by New York State are part of a collaborative plan to ensure safe public access to the Blue Hole area while also protecting the creek and the wild forest that surrounds it,” New York City Department of Environmental Protection (DEP) Acting Commissioner Steven Lawitts said. “Throughout the summer DEP will partner with the state to greet visitors at the Blue Hole area, share information about the new regulations and explain the important role that this watershed area plays in the New York City drinking water system,” said Lawitts.

The emergency regulations are in effect for 90 days and will be in place before the upcoming Memorial Day weekend. The development of permanent Site Specific Regulations for the property, that mirror the emergency regulations, is currently underway. The development of Site Specific Regulations will include the opportunity for the public to provide input and will include a public meeting. The public meeting will be scheduled as soon as possible and will be held in the Town of Denning area.

DEC has been consulting with local stakeholders since last summer to gather input and develop regulations specific to this property that would protect the environment of this overused resource and provide a safer and more enjoyable experience for users of the property and nearby residents of the Town of Denning.

All visitors to the Blue Hole should note that parking is extremely limited in the area and Law Enforcement will take necessary actions to maintain safety for visitors and local residents.